Cardano price is correcting lower on Monday while it is testing the support level at $0.32. The cryptocurrency is down 3.85% in the last 24 hours, while indicators are pointing towards a near-term bear momentum. In the recent declines, ADA/USD rejected the support highlighted by $0.34, while it descended to briefly trade below the current support level.

Cardano development team at IOHK has been catching the attention of cryptocurrency enthusiasts and investors. The latest from the team is that they have partnered with the Ethiopian government to explore Cardano blockchain for the agricultural sector. A tweet from Charles Hoskinson, Cardano’s head to the community reads:

“Just signed an MOU with the Ethiopian Ministry of Science and Technology to explore training blockchain developers and use Cardano in the Agritech Industry.”

IOHK has agreed to offer courses on Haskell programming language. The training will be given to 100 developers from the country, however, the first batch will be composed of women. Their skills will be utilized by the government to integrate blockchain in supply chain management for Coffee.  Furthermore, IOHK will also work with the local startups in the country as well as ministries to explore DLT apps.

At the moment, Cardano price is trading at $0.32, but a bearish momentum continues to push the price lower towards the key support at $0.32. The MACD on the 15’ timeframe chart is still in the negative region, however, it is moving upwards. ADA/USD is at a risk of further downside corrections, if the immediate support fails, the cryptocurrency could test the next support at $0.30. On the upside, short-term resistance is at $0.33, but the next target is at $0.34 and $0.35 respectively. Above $0.34, the 61.8% Fib retracement level will prevent upside movements. 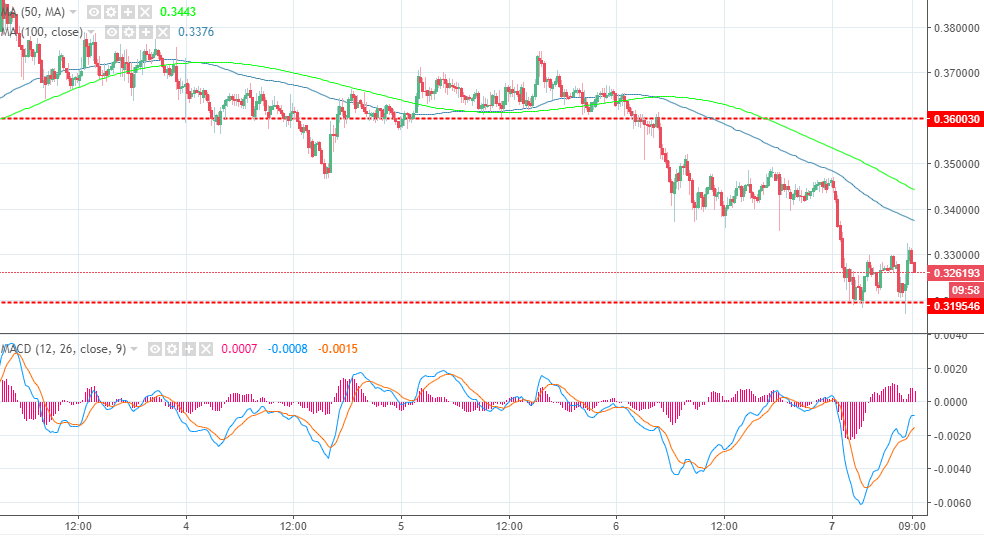