Bitcoin (BTC) attempted a recovery above $8,400 and resumed the decline into the end of the week. At the time of writing, BTC/USD is changing hands at $7,800, down over 5% on a week-on-week basis. Unsuccessful recovery attempts increase pressure on the coin as the market sentiments get sour. Disappointed by bitcoin's weakness, speculators exit the market and switch into a wait-and-see mode until the situation clarifies.

Notably, bitcoin's market dominance decreased to 66%, which is the lowest level since the beginning of August 2019. Bitcoin has been losing its market share since September 6.

What’s going on in the market

The cryptocurrency market has been at the mercy of sentiments, rumors and whales activity. No surprise here.

The cryptocurrency industry has had no shortage of news this week. However, the market movements were speculative and largely unrelated to the fundamental developments, which is no surprise to anyone involved in the crypto industry long enough.

Anyway, let’s have a closer look at what’s going in the crypto universe.

If you can’t beat them, join them

That’s the strategy adopted by the growing number of authorities and regulators all over the world. Bank of Canada and Sweden Riksbank have recently joined the global central banks that consider issuing their digital currencies to fight the threat emanating from bitcoin, Libra and other digital assets.

As the Canadian regulator would have it, cryptocurrencies can hamper the regulator’s ability to pursue a monetary policy or act as a creditor. According to the presentation submitted to the bank’s governor Stephen Poloz and the board of directors, the central bank-issued digital coin (CBDC) may be used along with cash initially, and replace it down the line.

The authors of the report admitted that digital currency may pose risks for “stable, low-cost financing for banks (deposits)”. However, the new asset will make it much easier to collect information about Canadians' spending. The obtained data may be transferred to the police or tax authorities.

Notably, the head of the Bank of Sweden voiced similar ideas. He noted that the upcoming Facebook’s Libra launch might motivate central banks to explore new opportunities.Read more on this

Meanwhile, the US Federal Reserve governors have their reasons for concerns. According to the President of the Federal Reserve Bank of Dallas Rob Kaplan, bitcoin and Co. threaten the dollar’s dominant position as a reserve currency in a global financial system. Speaking at a local business event in Austin, Texas, he admitted that the regulator was exploring the idea of CBDC (central bank digital currency).

Kaplan is concerned that sanctioned and tariffed countries are wary of dollar dominance. They are working hard on digital alternatives to the US currency.  If they succeed, the U.S. may lose its ability to sell its Treasuries at a low interest get cheap loans.

These views are shared by the head of the Commodity Futures Trading Commission (CFTC), Christopher Giancarlo, who also believes that the dollar might lose its dominant role if countries move onto a digitalized version of their fiat currencies.

Read more on this

Despite some recovery attempts during the week, BTC/USD is still locked in a range that has been dominant for the past three weeks. A failure to settle above the initial resistance of $8,400 worsened the technical picture and pushed the price back below $8,000 into the end of the week.

The price has come close to the critical support created on approach to $7,800. This area is strengthened by SMA100 (Simple Moving Average) weekly and the lower line of the Bollinger Band on a daily chart. It has provided a backstop for BTC since the end of September. Once it cleared, the sell-off may start snowballing with the next support at $7,400 (the low line of the  Bollinger Band on a weekly chart). and at psychological $7,000.  the pivotal barrier awaits us on approach to $6,700 (SMA50 weekly).

On the upside, we will need to see a sustainable move at least above $8,200  ( the middle line of the daily Bollinger Band) to mitigate the initial bearish pressure. The next important resistance is created by the weekly high marginally above $8,400. Once it is out of the way, the upside is main gain traction with the next focus on $8,600 and the ultimate barrier created by SMA200 daily on approach to $8,800.

The way to the North is not going to be easy as it is blocked by numerous barriers and resistance levels.

The Forecast Poll of experts worsened significantly since the previous week. Expectations of all timeframes are mostly bearish. The average price shorter-term forecasts are now well below 8,000. 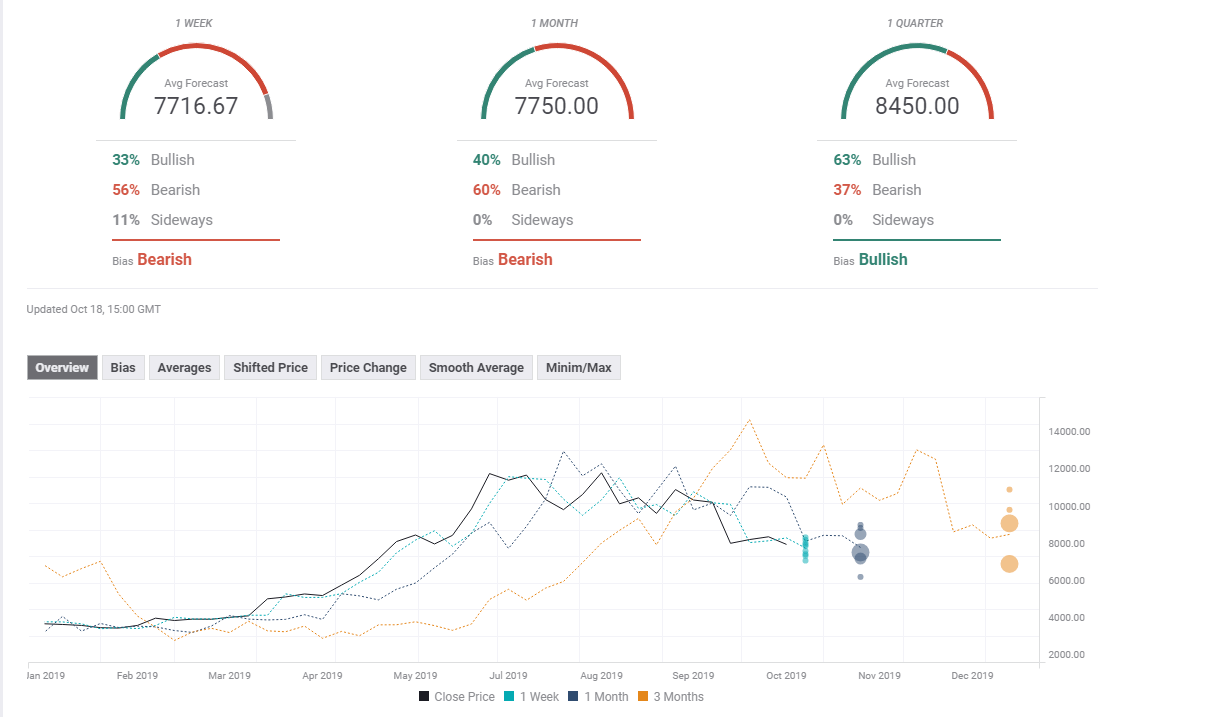 Ripple's XRP, now the third-largest digital asset with the current market value of $10.1 billion has lost nearly 6% in recent 24 hours.

Dash was among the biggest gainers in the January 2020 bull-run. From the December low around $38, the price spiked remarkably, breaking numerous barriers.

LTC bulls are not ready to regain initiative

Litecoin, the 7th largest digital coin with the current market value of $3.6 billion, lost over 6.5% in the recent 24 hours amid global correction on the cryptocurrency market.