So-called “market tourists” are fleeing from Bitcoin (BTC), leaving only long-term investors holding and transacting in the top cryptocurrency, according to blockchain analytics firm Glassnode.

In its July 4 Week Onchain report, Glassnode analysts said June saw Bitcoin have one of its worst-performing months in 11 years, with a loss of 37.9%. It added activity on the Bitcoin network is at levels concurrent with the deepest part of the bear market in 2018 and 2019, writing:

The Bitcoin network is approaching a state where almost all speculative entities, and market tourists have been completely purged from the asset.

However, despite the almost complete purge of “tourists,” Glassnode noted significant accumulation levels, stating that the balances of shrimps — those holding less than 1 BTC, and whales — those with 1,000 to 5,000 BTC, were “increasing meaningfully.”

Shrimps, in particular, see the current Bitcoin prices as attractive and are accumulating it at a rate of almost 60,500 BTC per month, which Glassnode says is “the most aggressive rate in history,” equivalent to 0.32% of the BTC supply per month.

Explaining the purge of these tourist-type investors, Glassnode revealed that both the number of active addresses and entities have seen a downtrend since November 2021, implying new and existing investors alike are not interacting with the network.

Address activity has fallen from over 1 million daily active addresses in November 2021 to around 870,000 per day over the past week. Similarly, active entities, a collation of multiple addresses owned by the same person or institution, are now approximately 244,000 per day, which Glassnode says is around the “lower end of the ‘Low Activity’ channel typical of bear markets.”

“A retention of HODLers is more evident in this metric, as Active Entities is generally trending sideways, indicative of a stable base-load of users,” the analysts added. 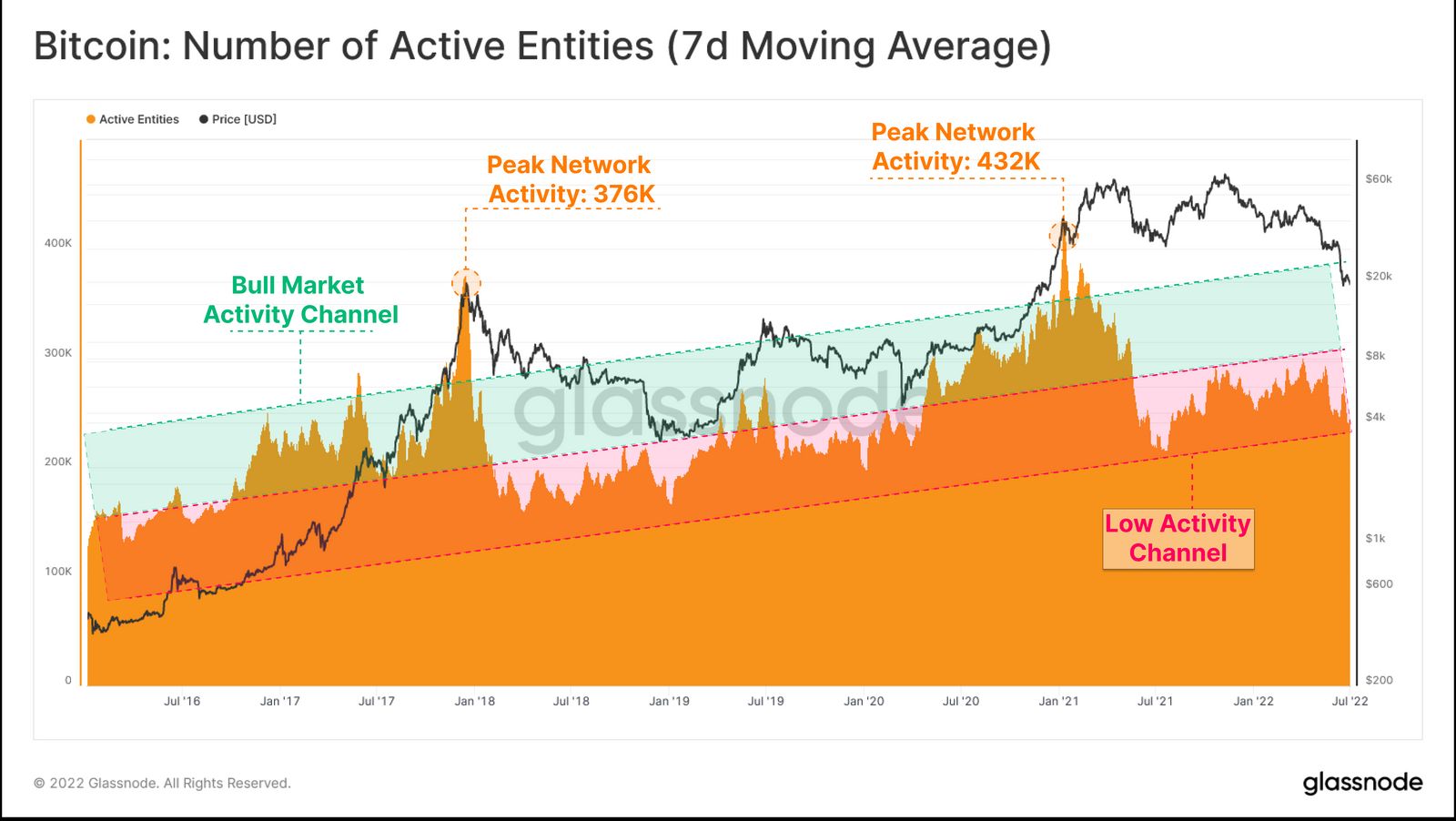 The growth of new entities has also dived to lows from the 2018 to 2019 bear market, with the user-base of Bitcoin hitting 7,000 daily net new entities.

The transaction count remains “stagnant and sideways,” which indicates a lack of new demand but also means that holders are being retained through the market conditions. 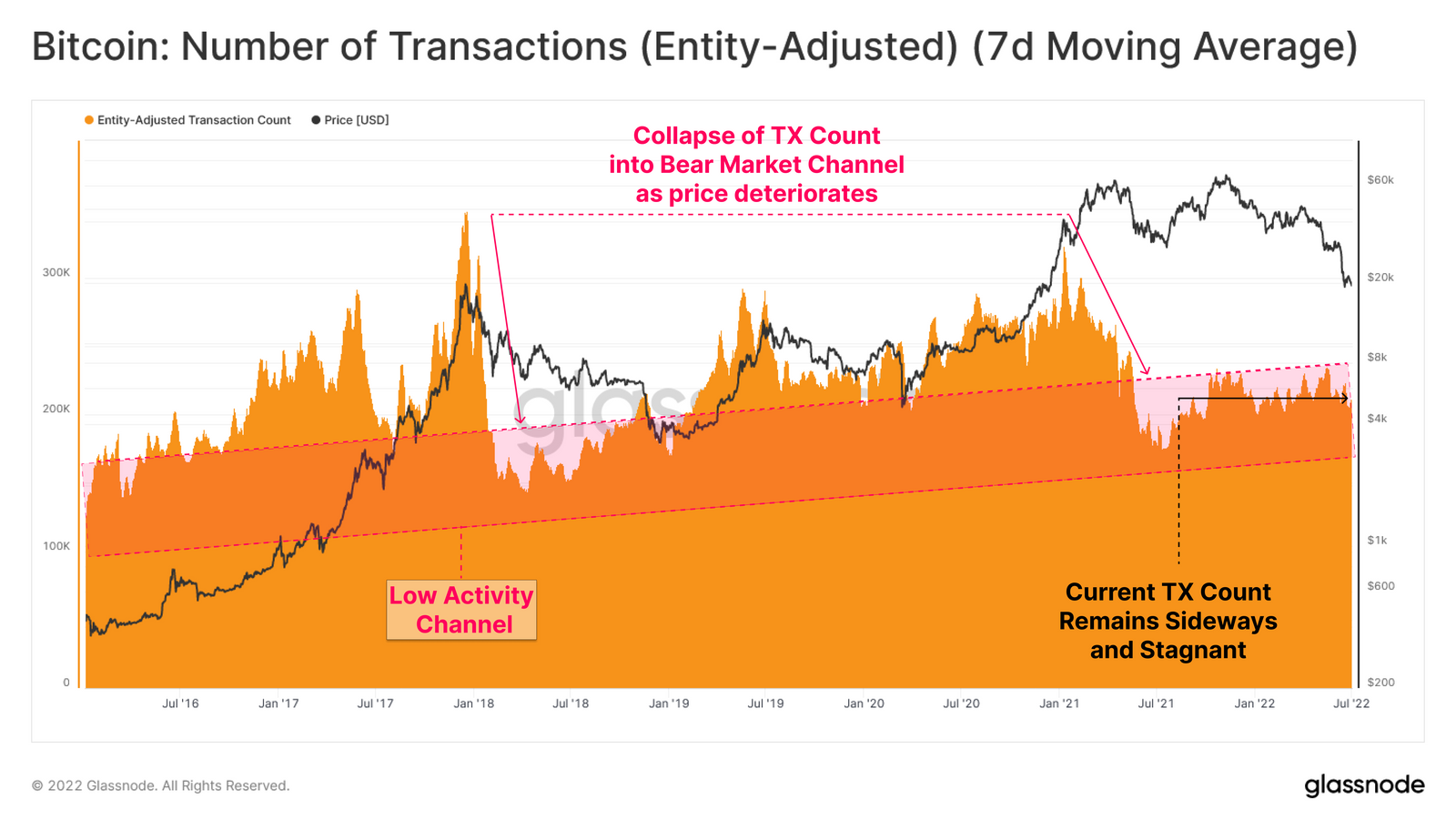 “Transactional demand can be seen to move sideways throughout the main body of the bear,” - Glassnode

Driving home its point, Glassnode concluded that the number of addresses with a non-zero balance, those that hold at least some Bitcoin, continues to hit all-time-highs and is currently sitting at over 42.3 million addresses.

Past bear markets saw a purge of wallets when the price of Bitcoin collapsed. Still, with this metric indicating otherwise, Glassnode says it shows an “increasing level of resolve amongst the average Bitcoin participant.”

Coinabase has a lot of eyes on it, being the second biggest cryptocurrency exchange in the world. But despite that title, the exchange is losing revenue left and right due to the crypto market crash triggered by FTX’s bankruptcy.