Bitcoin's near-term prospects look bleak after the U.S. Federal Reserve set the stage for a more aggressive withdrawal of liquidity, weakening market confidence in the so-called Fed put – a notion that the central bank will come to the rescue if assets tumble.

On Wednesday, the Fed pointed to the U.S. economy's underlying strength and inflation's stickiness and reaffirmed plans to end the bond-purchase program in March. It also hinted at a potential interest-rate increase in the same month.

Before the event, crypto followers on Twitter were expecting Fed Chairman Powell to sound less hawkish in the wake of the recent stock market drop. Powell, however, made no reference to asset prices and said policymakers feel there is quite a bit of room to raise interest rates without threatening progress on jobs.

That led experts to predict choppy-to-adverse bitcoin price action in the coming weeks.

"Bitcoin is likely to remain under pressure as there is no Fed support," Delta Exchange CEO Pankaj Balani said. "Post-Fed flows have been bearish, with most of our clients anticipating a deeper decline."

"The market sentiment is pessimistic, and liquidity appears to be accelerating its withdrawal from risky asset markets," Griffin Ardern, a volatility trader from crypto-asset management company Bluefin. "In the futures market, investors are already reluctant to pay more premiums for far-month futures. That's a vital bearish sign."

The Fed put worked in the past as inflation was low. However, with U.S. inflation running at a four-decade high, the central bank may become more accepting of asset price slides. That said, a continued decline may force the Fed to tone down its hawkish bias.

While the outlook for bitcoin is bearish, the downside may be limited unless there is also a significant slide in technology stocks. Bitcoin is seen by some as both digital gold and emerging technology.

"Bitcoin has already dropped over 40% since mid-November. Thus, downside appears limited," Balani said. "However, a significant sell-off in stocks could drive the cryptocurrency under critical support at $30,000."

Matthew Dibb, the COO and co-founder of Stack Funds, shared a similar opinion. "Support remains relatively strong for bitcoin, but a +5% drop in the S&P 500 will likely have a profound impact on crypto to the downside."

Markets have come under pressure since the Fed's meeting. While futures tied to the tech-heavy Nasdaq 100 index were trading 0.4% lower at press time, bitcoin was down 2% at $36,200, having faced rejection near $39,000 on Wednesday.

"We haven't had a meaningful bounce since we broke below $40,000, just a slow grind up," said Laurent Kssis, a director of crypto-trading advisory firm CEC Capital. "This doesn't feel that great given no real support has been established, although, on the positive side, this structure is completely the norm for higher timeframe bottom formations."

Kssis foresees consolidation near $35,000 but favors hedging long positions with a short futures contract, given the cryptocurrency's vulnerability to weakness in tech stocks.

Cash could be the king

With the Fed hiking cycle likely to begin in March, the U.S. dollar and stable coins backed by the greenback could draw demand.

"The USD strength is crazy and a major breakout looks to be forming on the dollar index," Stack Funds' Dibb said. "Looks like cash is the king." 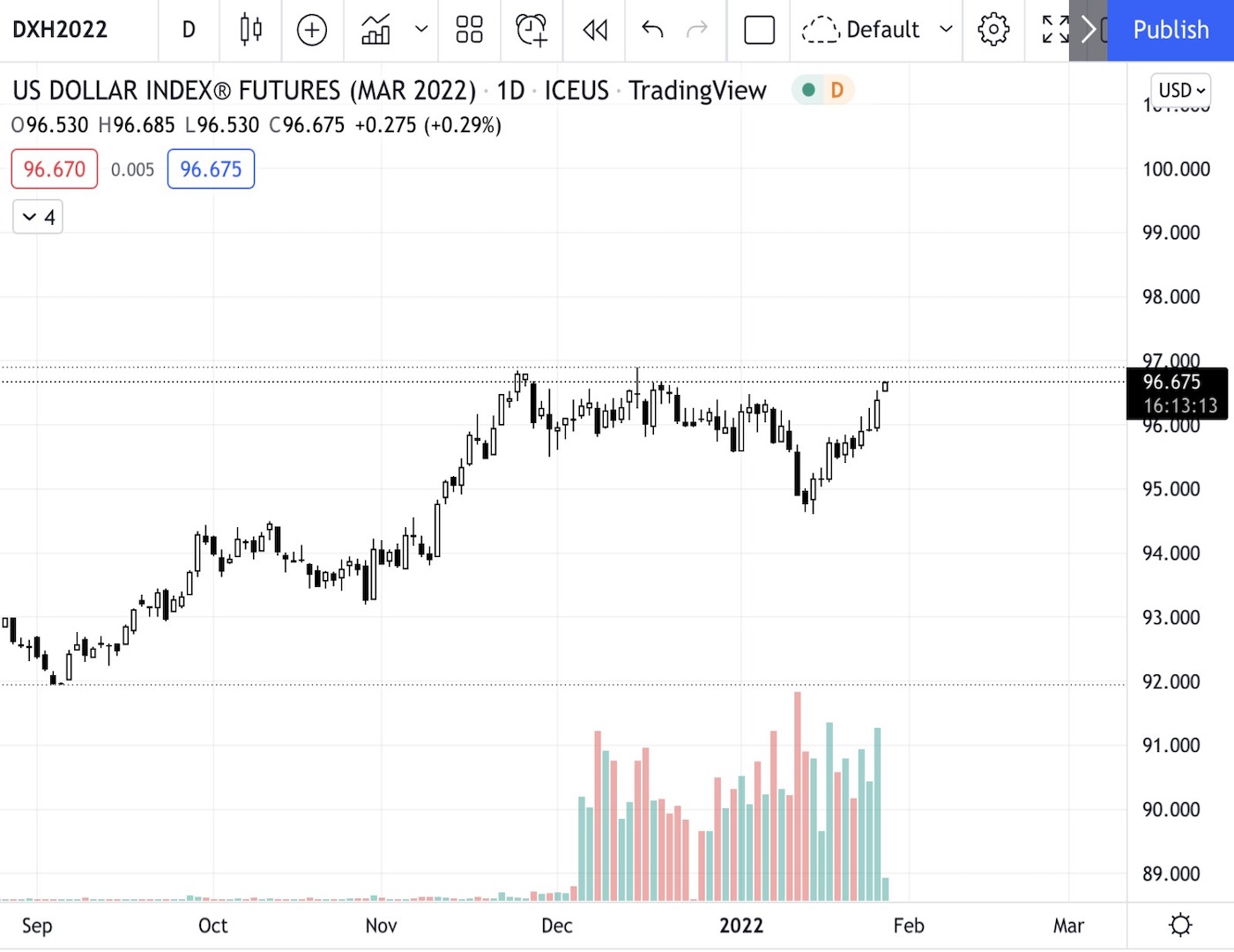 Futures tied to the dollar index, which measures the greenback's value against major fiat currencies, rose to 96.70 early today, marking a 2.2% rise in two weeks, according to TradingView data.

A close above the November high near 97.00 would confirm a breakout, opening doors for a continued rally. A dollar rally is considered bearish for bitcoin.

According to Sam Kazemian, the founder of the Ethereum-based Frax stable coin backed by asset collateralization and cryptographic algorithms, a bear market for crypto marks a bull market for stable coins.

"In a bear market, stable coins like Frax and USDC are seen as cash," Kazemian told CoinDesk in a Zoom call.

Frax's circulating supply has increased by 63% to 2.62 billion in the past 30 days, the biggest percentage gain among the top 10 stable coins by market capitalization, according to data source Coingecko.

The market dominance of tether, the largest stable coin by market value, has risen to 5%, the highest since July 2021. Meanwhile, USDC's dominance has more than doubled to a record 2.8% since November. Market dominance refers to the coin's share in the total crypto market capitalization.