Bitcoin (BTC) saw a staunch comeback on Tuesday thanks to fresh bullish news from PayPal combined with solid on-chain indicators. 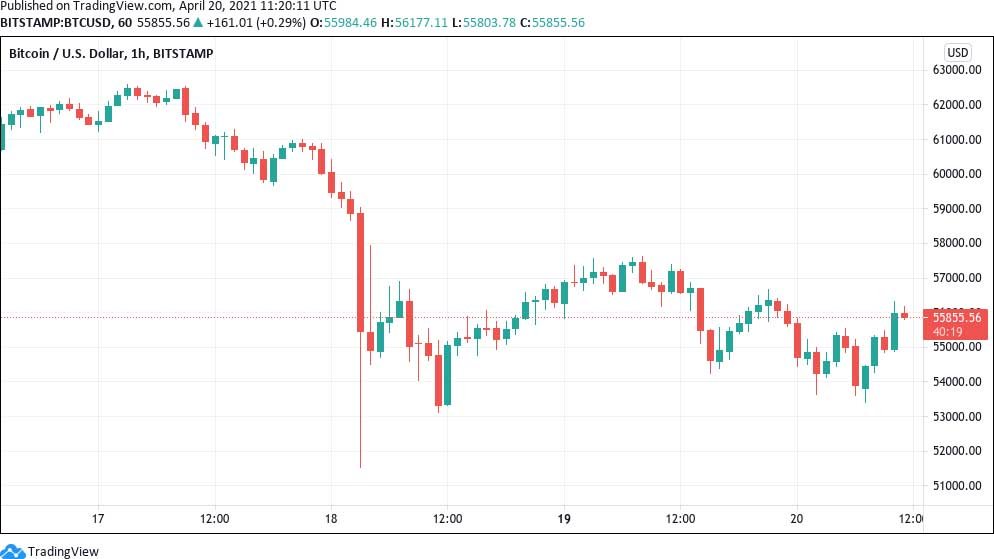 News that PayPal-owned payment company Venmo had launched cryptocurrency buying and selling to its app appeared to buoy the recovery. On the flip side, a social media-induced “Dogecoin Day” was adding pressure to Bitcoin’s immediate upside prospects as funds continued to flow into Dogecoin (DOGE) on the day.

As Cointelegraph reported, the aim of the “celebration” is to launch DOGE/USD to $4.20 to coincide with the date and the week in which SpaceX “Technoking” Elon Musk promises to “put a literal Dogecoin on the literal moon” with his latest rocket launch.

The hashtag #Doge420 was trending on Twitter at the time of writing, with DOGE/USD trading at just over $0.38, coincidentally up 420% in a week but flat on the day. United States traders were yet to wake up, leaving the prospect of gains later in the day open.

Back within Bitcoin, meanwhile, traders were eyeing one indicator in particular as signaling both solid support at $52,000 and that this week’s dip would now bounce definitively.

As such, daily performance should now see BTC/USD lifted off its recent floor and continue grinding upward.

TradingView account Elliot 0511, who uploaded a chart showing the habitual behavior, said in comments that there was no reason to think that this time would be different. It summarized:

“As we see from the chart we have a double confirmation that this DIP is almost at the end, we can establish it from the fact that, besides the fact that the price is bounced on the main support, we also have Stoch RSI at 0, this happened only 6 times from Bull market start and there was always a rebound, I don't see the reason why this time the same thing should not happen, the Bull market has just begun, don’t scare yourself because there is no reason.”

“If you are willing to buy a hyped up meme coin at these prices, you should have no problem adding some Bitcoin spot here,” it told followers Tuesday.

“Once $DOGE dumps we should see a nice recovery. No point talking about any price lower than $52,000 unless this doesn’t hold, which I think it will.”

Dogecoin price has successfully bounced off the $0.397 to $0.451 demand barrier, hinting at an incipient upswing. A continuation of this momentum could push DOGE to $0.697 and $0.740. Breakdown of the support level at $0.371 will invalidate the bullish thesis.

MATIC price breakout from a minor correction gains traction above $1. Extreme overbought conditions on the weekly chart may not mark a top. Oddz Finance and Stakefish deals continue the accelerated adoption of everything Polygon.