Bitcoin price continued with the declines yesterday the support at $6,400 gave in to selling pressure. The slide was unstoppable at $6,300 leading further explorations downstream. Bitcoin trade lows of $ 6,226.22 before recovering slightly above the 23.6% Fib retracement level support taken between the highs of $6,800.42 and lows of $6,122.65 closer to $6,282.15. This level is also acting as a support at the time of press.

The trading on Thursday has been slightly bullish but there is a shortage of momentum to witness considerable gains. BTC/USD has traded highs of $6,387.17 and lows of $6,268.28 on the day. The crypto is still exchanging hands marginally above $6,300 while battling to keep the 50 simple moving average support at $6,315.84.

There is a contracting triangle forming on the short-term 15-minutes chart which could lead to a breakthrough in the near-term. A break above the 100 simple moving average resistance at $6,375.45 will allow for further upside movement above the 23.6% Fibo resistance. $6,400 is also in sight and within reach, if the buyers can maintain the momentum above the trendline. However, BTC/USD could break down more if the lower trendline support at $6,300 is broken. Bitcoin is still in danger of dropping towards the stronger support at $6,200 while $6,000 is within reach unless the buyers maintain the price above $6,300.

Investors are angry after the Security Exchange Commission (SEC) delayed the Bitcoin ETF approval to September 30. But the CEO of Pantera Capital, Dan Morehead has called out to investors to exercise calmness and long-term thinking. The feud involving the legislators, regulatory authorities and investors is believed to be the catalyst for the current selloff in the market. While on CNBC Dan Morehead told investors:

“I still think it will be quite a long time until an ETF is approved. The last asset class to be approved for ETF certification was copper, and copper has been on earth for 10,000 years.”

The CEO added with regard to the plunging crypto prices:

“The main thing to remember is that bitcoin is very early-stage venture, but has real-time price feed — and that’s a unique thing. People get excited about the price and overreact.” 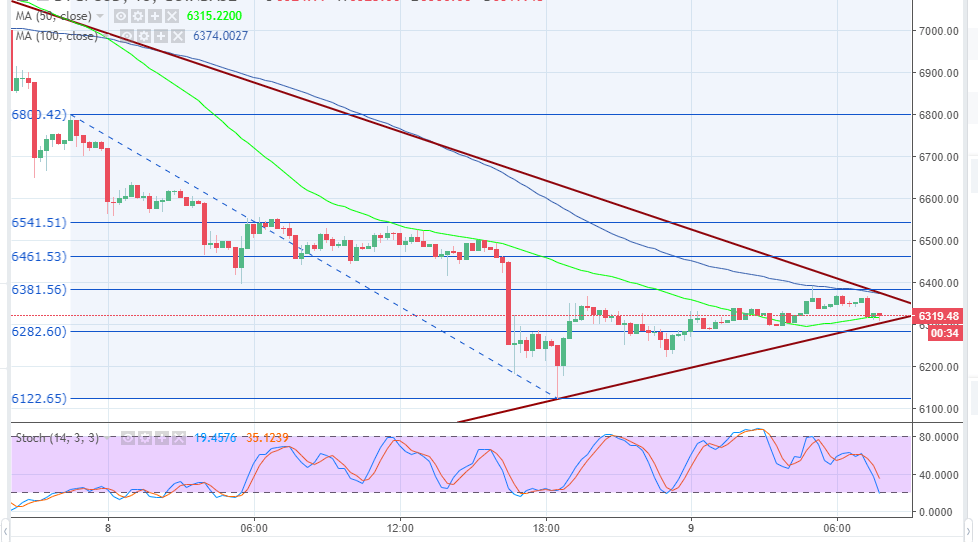