Bitcoin price is consolidation gains above $7,400 and while most of the digital assets in the market are struggling after the bull rally this week, the largest crypto by market capitalization appears to be stable. Following the bullish engulfing candle on Tuesday, a short-term bullish flag pattern supported above $7,300 broke out above $7,400.

The technical indicators on the 4-hour chart are sending bearish signals in the medium-term. For instance, the 50 SMA has crossed below the longer term 200 SMA signalling for more selling entries. Similarly, the stochastic is at 65.5% and advancing to the south. On the upside, the immediate resistance is $7,500, which also a breakout position towards $7,600 and the upper limit at $7,800. Bitcoin price is, however, likely, to test the short-term support at $7,400 before retracing higher above $7,500.

Bitcoin market dominance has continued to rise in the past few days. Its market share is at 45.1% according to CoinMarketCap. Bitcoin has remained stable above $7,400, however, the same cannot be said about most of the coins and altcoins. Bitcoin had a 45% market share dominance in April 2018. It has a trading volume of $4.8 billion in the last 24 hours while its market capitalization stands at $128 billion. 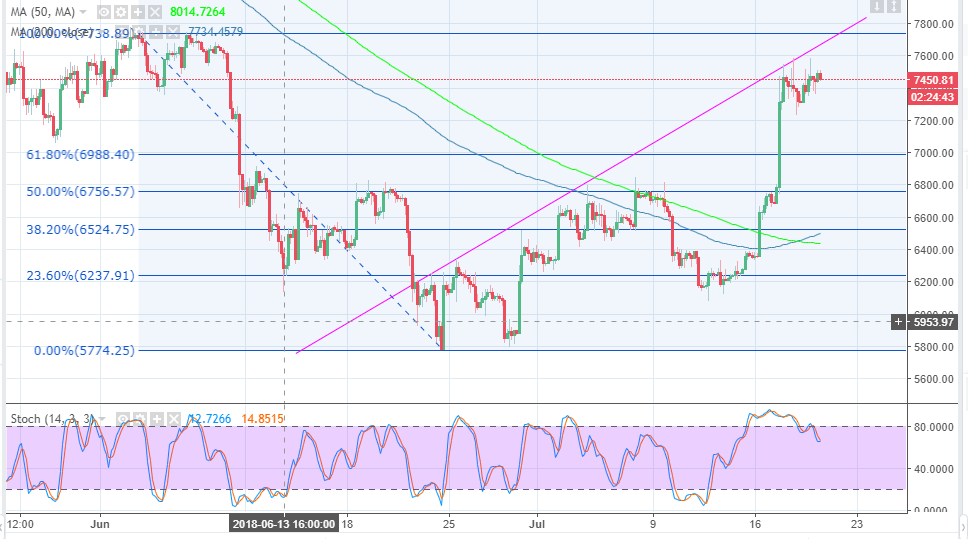