Bitcoin price trend is generally bullish at the moment owing to the fact that it opened the trading at $6531.96 followed by a downside movement that had BTC/USD trade marginally above $6,450. The price is currently changing at $6,491 as the weak bullish momentum tries to advance above $6,500. The short-term 100 SMA is going to be offering resistance slightly above $6,500 but the longer term 100 SMA will be a significant handle close to $6,550 approaching the key resistance at $6,600.

The co-founder of Fundstrat who is also a respected Wall Street strategist, Tom Lee while on CNBC's Squawk Box seemed to relent on his earlier prediction that Bitcoin (BTC) will reach $25,000 by the end of 2018. He was more inclined to introducing a fair figure while saying:

“Bitcoin has historically traded at 2.5 times its mining costs. It’s not out of the question that it could be over $20,000 by the end of the year at fair value,” but Tom Lee still maintained that the $25,000 figure is still viable. Lee added, “…given where mining costs will be and applying the historical average of 2.5 times mining costs, that would imply fair value over $20,000, roughly $22,000.”

Bitcoin is likely to break above the short-term resistance at $6,500 (50 SMA) while $6,600 is within reach in the intraday trading on Friday. The level at $6,700 is the currently immediate upper supply zone, besides if BTC/USD can find a support above this level; the buyers can find support to retrace towards $7,000 in the medium term. On the downside, the 61.8% Fibonacci retracement level with the last high leg of $6,781.69 and a low leg of $5,777 will stop downside explorations at $6,400. 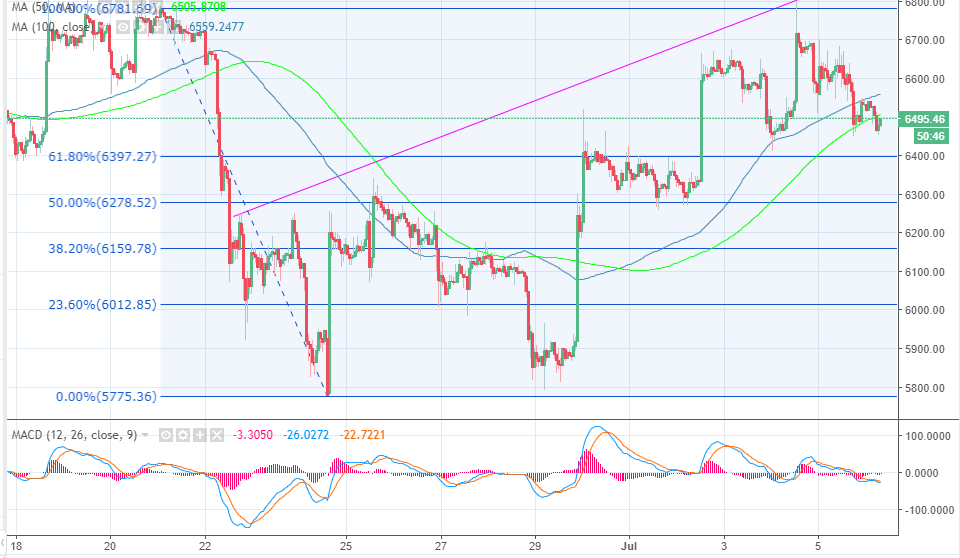