Bitcoin spiked again before the close of the session yesterday. Similarly, as covered in the Bitcoin price analysis yesterday, a consolidation above $6,700 paved the way for another upside movement that broke above the critical resistance at $6,800 as well as long-term key resistance at $7,000. Moreover, the inverse head-and-shoulders pattern resulted in the bullish movement.

The sharp ascent retraced steps above $7,300 but lost steam short of $7,400. BTC/USD reacted with lower corrections but the Bulls stood their ground and the declines were stopped marginally above $7,300. Furthermore, after kicking off the trading today at approximately $7,314, the price recoiled even higher breaking above $7,500 during the Asian trading hours. Another downside correction occurred but found a support above $7,330.

Bitcoin price is currently exchanging above $7,400 and is aiming for $7,500 in the short-term. The stochastic RSI on the 1-hour timeframe chart is heading north but still at 50%. In the short-term, $7,600 is within reach, but first, the price must find a support above $7,500 and possibly consolidate gains above this level. In the meantime, a support above $7,400 is essential to prevent declines into the $7,300 range.

To sum it up, the trend is strongly bullish at the time of press, but it important that a support is established above $7,400.

In other news, Litecoin founder Charlie Lee has advised investors and cryptocurrency enthusiasts to first by at least one Bitcoin before diving in to purchase altcoins. Lee wrote this on his Twitter account and the message reads:

“There will be at most 21 million bitcoins in existence. There isn’t even enough BTC to go around for EVERY millionaire to own one. So before you buy any other coin (LTC included), try to own at least 1 BTC first. Once you have 1 BTC, buy all the s***coins you want!” 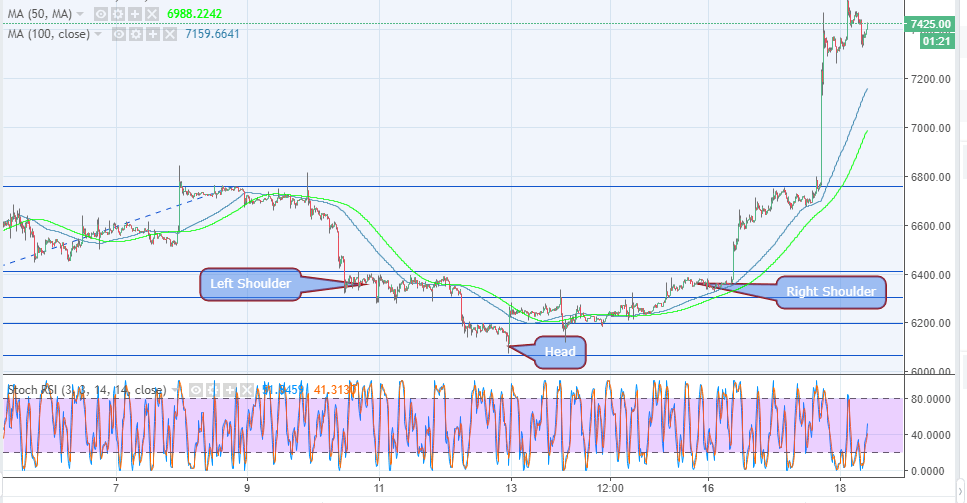