Bitcoin price is trading marginally above $7,600, but the current immediate support is at risk of being broken. BTC/USD along with the other major coins like Ethereum, Ripple and Bitcoin Cash made considerable upside corrections during the weekend sessions. Bitcoin price broke above the resistance at $7,700, but the upside was limited below $7,750 followed by downside correction during the Monday Asian trading hours.

The Seattle based cryptocurrency exchange, Bittrex has entered into a partnership with a bank in New York. The move is geared towards allowing some of the corporate customers to trade “USD to crypto” on the exchange. The assets that will benefit from the partnership with Signature Bank are Bitcoin, TrueUSD as well as Tether. The CEO of Bittrex, Bill Shihara said in a comment:

Bitcoin price, on the other hand, is immediately supported by the 38.2% Fib retracement with the last high leg of $7,907 and a $7,090 low. Both the 50 SMA and the 200 SMA are pointing towards short-term lower corrections. Besides, the MACD is moving into the negative territory to signal that the bears are gaining control. The 50% Fibo will support the price around $7,500 but $7,400 is still within reach on the downside. On the upside, the key resistance is at $7,750 toward the psychological $7,800 level. 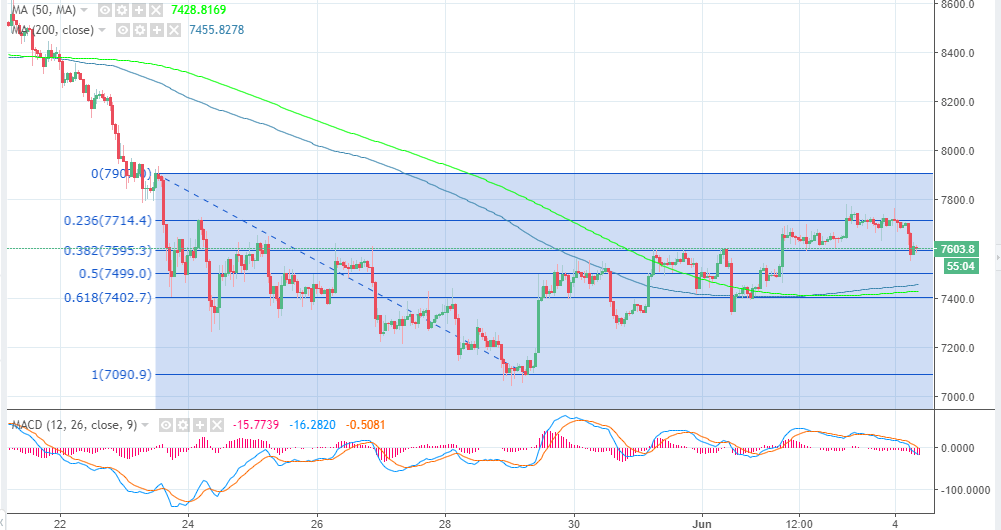