Bitcoin’s mining difficulty, a metric that describes how difficult it is for miners to find new bitcoin blocks and earn rewards, has seen a small jump after its dramatic 13% surge two weeks ago.

At 00:05 UTC on Tuesday, the biweekly mining difficulty adjustment posted a 4.5% increase at block 699551, according to several mining sites. “Difficulty” refers to the relative measure of the amount of resources required to mine bitcoin. This measurement adjusts up or down depending on the amount of power consumed (or “hashrate” produced) by the network at a given time. Bitcoin’s protocol is set to adjust the difficulty level every 2,016 blocks, or roughly every two weeks, to ensure that new blocks are mined at a stable rate.

Mining bitcoin is becoming more costly as mining difficulty has been driven up by the massive amounts of existing computing resources devoted to mining, as well as more competition among miners to find new blocks. However, the largest cryptocurrency’s recent bull run has offset the increasing costs and keeps bitcoin mining highly profitable, according to miners and mining pool operators.

“Price is increasing faster than difficulty,” Daniel Frumkin, researcher at Prague-based bitcoin mining company Slush Pool, said. The good news is that the price is going up, which means mining revenue in fiat is holding steady even though revenue is decreasing in BTC terms, Frumkin added. 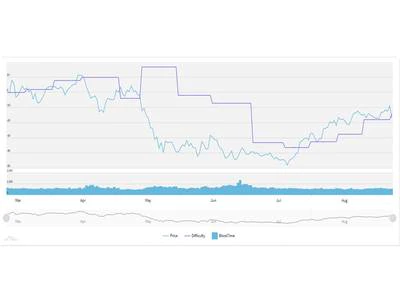 Bitcoin’s price appeared to have recovered from China’s crackdown on crypto trading and mining in late July. It broke through $50,000 again last week after dropping below $30,000 on July 20, according to the CoinDesk 20 price index.

Hash price, a measure of bitcoin mining revenue in fiat currency, hit the bottom during the bear market in the summer of 2019. Margins on mining operations have increased by over 80% since then, according to Nick Hansen, CEO of Seattle-based mining company Luxor.

Besides bitcoin’s recent bull run, the record revenue margin is also in part due to the State Council of China ordering local authorities to shut down crypto mining sites in May. This shutdown resulted in the retirement of roughly one million mining machines in China. However, those miners outside of China who were able to stay online found themselves much more successful - and profitable - as the field of miners competing to find new blocks suddenly narrowed.

The latest 4.5% increase in mining difficulty pales next to the surge of two weeks ago when the difficulty shot up 13%. The slower growth could be attributed to limited hosting capacity across the globe, said Azam Roslan, senior sales associate at New York-based miner hosting services provider Wattum.

As the lack of hosting capacity continues, mining difficulty may face slow growth in the near future.

“At the moment, there is officially no available hosting space until global infrastructure catches up to the demand,” Roslan said. “It is very unlikely that we would see new highs in difficulty until hosting supply stabilizes and older equipment gets back online.”

While miners and hosting services providers are scrambling to build new infrastructure, hosting supply has been far from fully absorbing all the second-hand machines from China as well as large quantities of new machines ordered by public miners in North America such as Marathon and Riot.

“From our continuous global search of low-cost and sustainable electricity, we found that there is an extreme lack of available rack space to cater to all the displaced miners,” Rosland said. “As hosting space increases in value alongside mining profitability, every single facility operator is looking forward to expanding their existing capacity.”

More new sites would be in operation as early as December, while many won’t be able to host mining machines until the first quarter of 2021, according to estimates by Hansen.

The end of the rainy season in South China could be another reason that mining difficulty is slower than the last adjustment.

As some Chinese miners have secretly plugged their mining machines back online, the mining hashrate has recovered at a velocity that exceeded many mining pool operator’s expectations, according to two major Chinese mining companies.

“The revenue margins are so high that they may be willing to take extra risks such as plugging back in China secretly, which we definitely think is happening,” Hansen said.

The rainy season in Sichuan province of South China during this summer has enabled local dams to produce large amounts of hydro power, which can boost Chinese miners’ hashpower with cheap and ample electricity. However, the miners tend to migrate to northern regions such as Xinjiang and Inner Mongolia in China to continue mining with coal-fire power as the rainy season ends in September.

Chinese miners’ migration to North China might be slower this year due to the ban on crypto mining. That is another reason why growth in mining hashrate would be moderate in the coming months besides the lack of mining infrastructure, Hansen said.