Bitcoin is on the move again, a venomous snake in the grass. You might expect to find a reasonable explanation for cryptocurrency’s sudden, spectacular rise from the dead. Instead, you get only dim-witted speculation that institutional players are starting to warm to it again. Fidelity, for one, reportedly will be buying and selling bitcoin for institutional customers starting in a few weeks. While that may be good news for cryptomaniacs, it hardly justifies the doubling of bitcoin’s price since early April.

Recall that blockchain “money” was reviled and repudiated after it fell to $4,000 in less than a year from a $20,000 peak at the end of 2017. Since then, cryptocurrencies have remained under a dark cloud, not only because of the disastrous outcome of the 2017 bubble, but because of security breaches and scandals that ordinarily would doom a less addictive asset class. Now, apparently, all is forgiven or forgotten — not because Fidelity and their ilk want to better serve their customers, but because they sense that speculators, having learned nothing from the first bubble, are hot to trot again.

Mourning Is for Sissies

It is predictable that bitcoin’s rise from the pyre will end badly. But it does give the speculative mania that has been driving the stock market a new lease on life, since bitcoin nuttiness will have to run its course a second time before it comes to a fitting end. The chart (inset) is remarkable because, in most instances where an investable has gutted and disemboweled so many fools, it has taken a while to forget and rebuild. Base-building is what saucer-shaped bottoms are all about. In bitcoin’s case, however, there has been no such seemly interval for contrition, mourning and reflection. Bidden anew by fools, block-chain money has lurched back to life and there is no stopping it now.

Despite my cynical contempt for cryptocurrencies (although not for blockchain technology), I will continue to forecast price action based solely on charts rather than feelings. During the 2017 bubble, Rick’s Picks subscribers saw ample proof that the Hidden Pivot Method is well suited to the demands of bitcoin traders who require accurate price forecasts and risk-averse entry tactics. The ‘mechanical’ trade set-up in particular is geared toward initiating trades in so violent a vehicle as bitcoin. Getting bitcoin's wild swings right is a piece of cake. But don’t take my word for it. 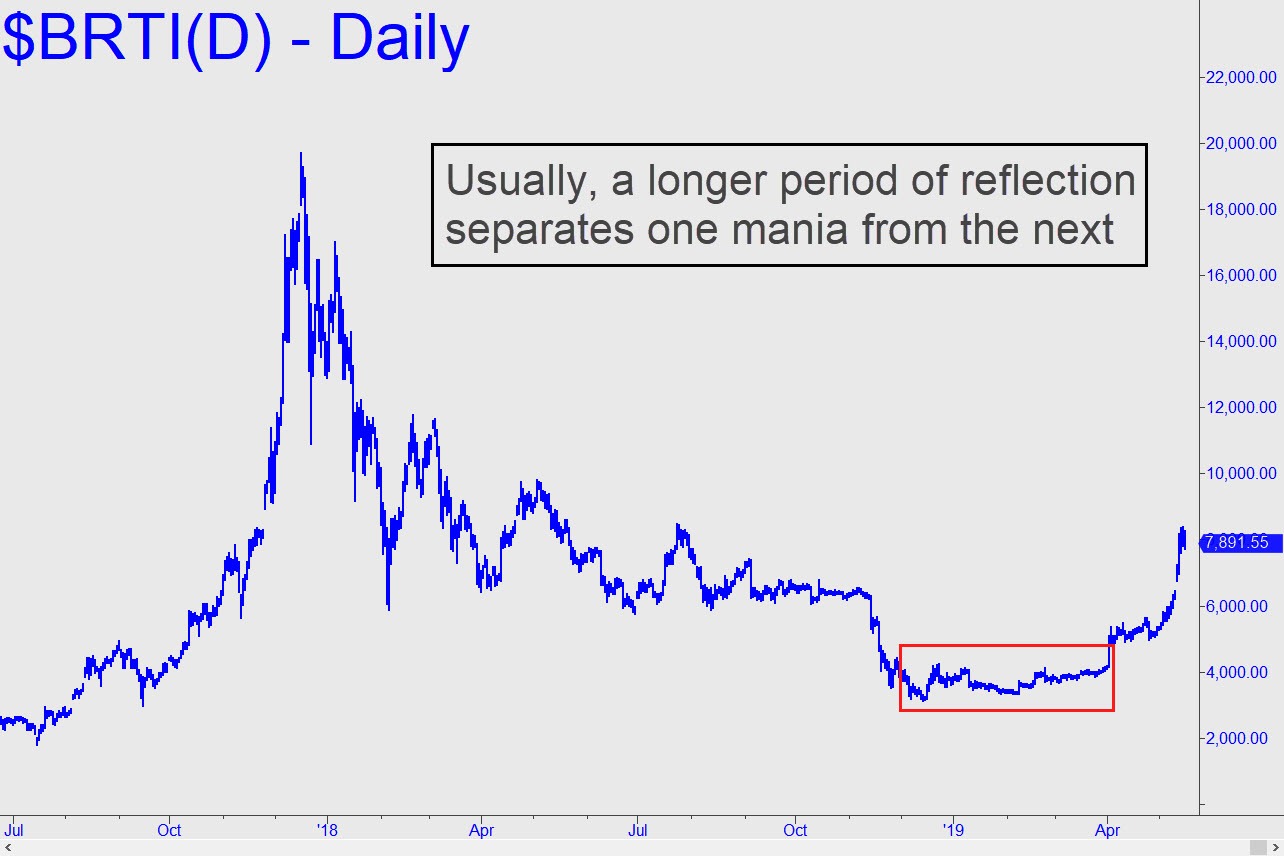