Bitcoin price spikes continue as data reveals exchange activity is anything but flat this week.

According to the exchange whale ratio indicator from on-chain analytics firm CryptoQuant, large transactions have accounted for over 90% of recent exchange deposits.

In a marked change from previous behavior, over the past week, whales have become much more active prospective sellers on exchanges.

The exchange whale ratio, which measures how large the top 10 deposits to exchanges are relative to all deposits, is sounding the alarm.

“$BTC Exchange Whale Ratio(72h MA) reached 91%. This indicates the top 10 deposits take 91% of the deposit volume across all exchanges in the hourly timeframe.” 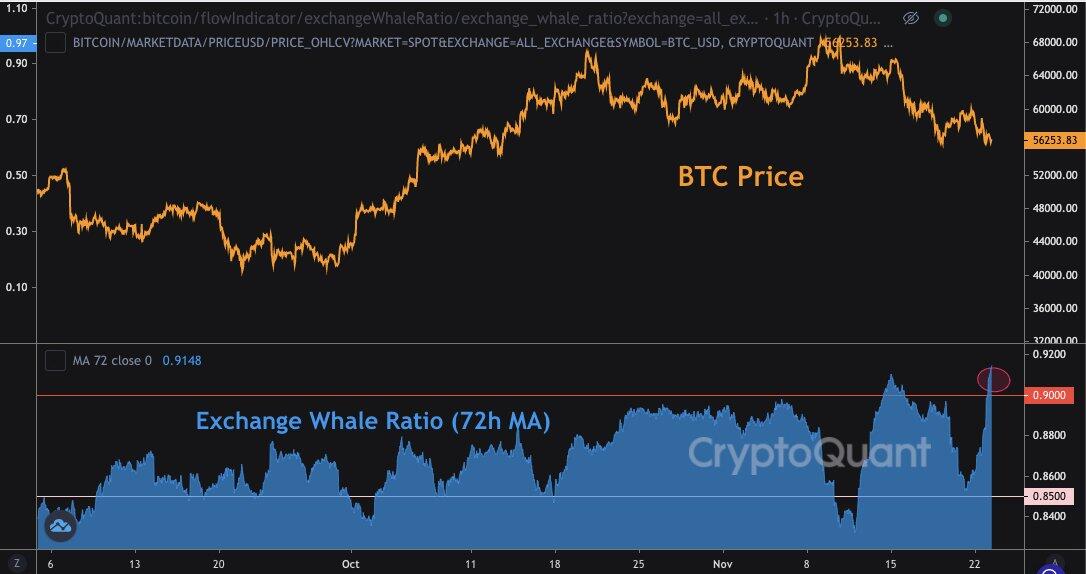 The data presents an interesting counterpoint to the current narrative involving whales.

As Cointelegraph reported, large wallets have been buying throughout the recent downturn, while on Tuesday, bid levels among whales increased on exchange Bitfinex from $50,000 to around $54,000.

As responses to Ki additionally noted, outflows from exchanges en masse also continue, with reserves still at their lowest since mid-2018.

Bitcoin saw volatile spikes Tuesday in what would correlate with sudden large-volume actions on exchanges.

The phenomenon has played out several times over the past week, each time seeing a sudden burst in BTC price action that then dissipates at major resistance levels. For analysts, $60,000 nonetheless needs to return and hold as support once more in order to trigger a genuine change in the current downtrend.