Bitcoin price briefly surged above $35,000 to spark a relief rally in altcoins but a number of bearish factors still surround BTC.

Although bulls made a show of force in the morning trading hours, Bitcoin (BTC) price is still pinned under the $35,000 resistance and unable to flip the 20-day moving average to support or secure a daily close above the level.

Data from Cointelegraph Markets Pro and TradingView since rallying to $35,400 on June 28, Bitcoin has traded in a range between $33,850 and $35,000 as the fallout from China’s crackdown on BTC mining continues to reverberate across the market. 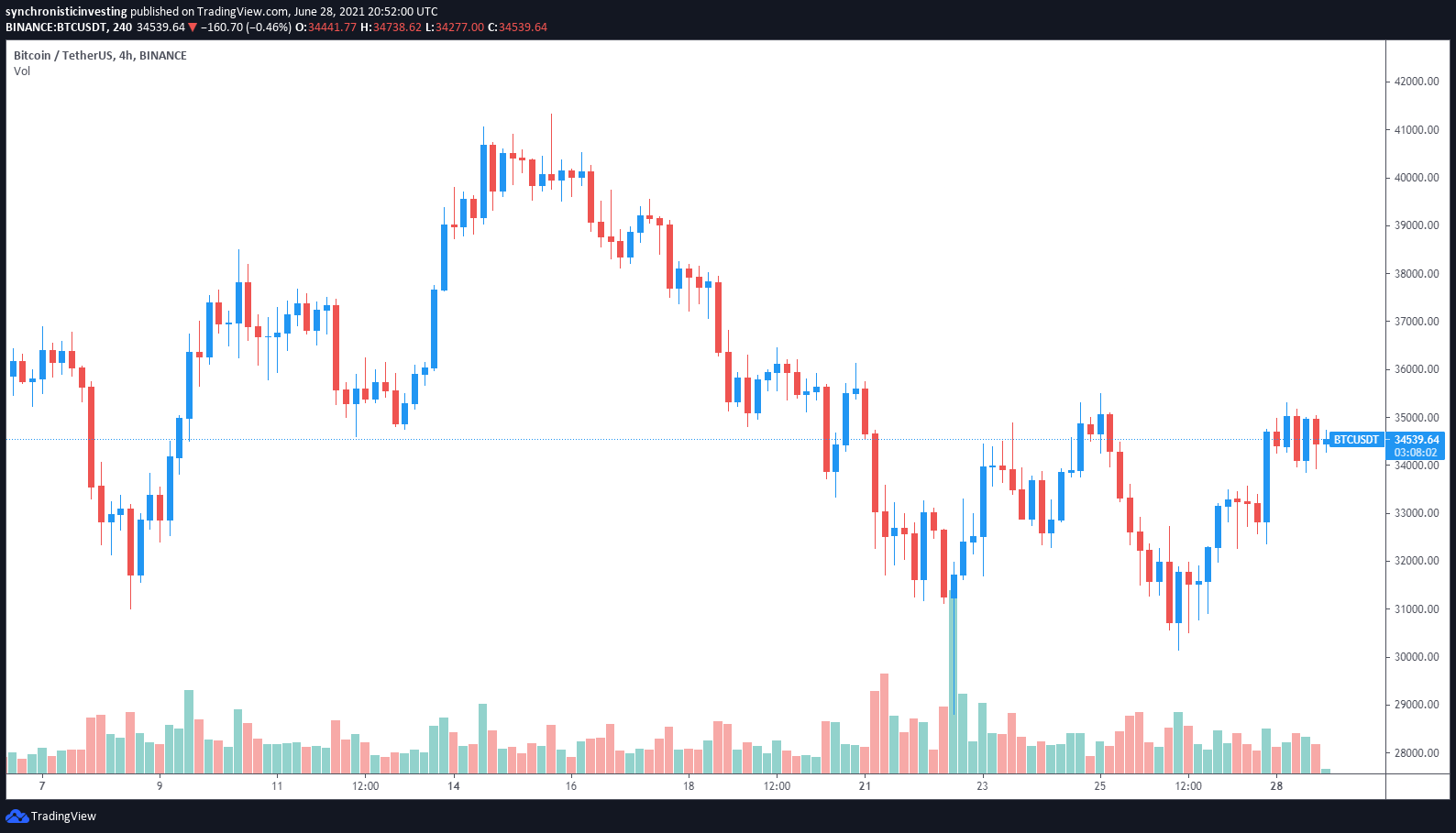 In addition to turning the Bitcoin mining ecosystem on its head, China's government also turned the screw on local cryptocurrency exchanges, resulting in the closure of BTCChina. China has also effectively banned crypto derivatives trading for Huobi exchange users.

Bitfinex BTC flows come into focus while the selling continues

According to data from Glassnode, the downside price action over the past week “appears to have created a panic” for both long and short term holders “as demonstrated by the volatility in LTH-SOPR, and deep capitulation in STH-SOPR.” 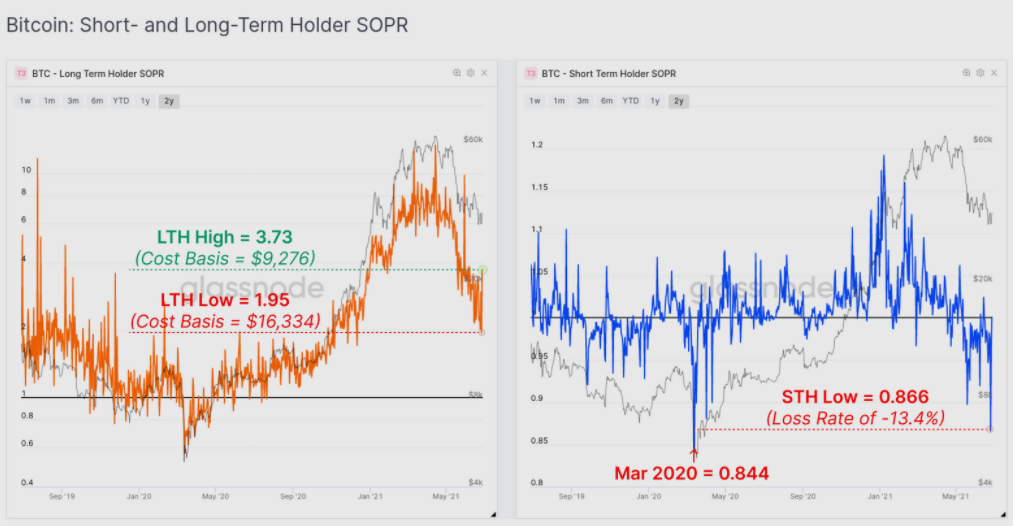 STHs have realized losses only slightly less than in the March 2020 capitulation event. LTHs were willing to spend coins with an average cost basis fluctuating between $9.2k and $16.3k this week, suggesting a high degree of uncertainty.

Further insight into the current market conditions offered by CryptoQuant highlighted Bitcoin inflows and outflows at Bitfinex as a possible gauge for market developments.

Hoping for a quick uptrend turnaround

According to CryptoQuant’s analysis, the market has seen a “relatively high derivative to spot BTC flow,” a change that usually “implies a turning point” in the market.

CryptoQuant highlighted that the recent increase seen in the Bitcoin all exchange inflow mean (MA7) “indicates that the large deposits that caused the decline are coming to an end,” an observation that was further supported by Bitcoin outflows from Bitfinex, “which was considered the main culprit of the recent downtrend.”

The increasingly risky situation the bears now find themselves in was highlighted by crypto Twitter analyst, William Clemente III, who posted the following tweet pointing to 11 straight days of negative funding.

Funding has now been negative for 11 days straight.

Most altcoins saw a turnaround in prices as Bitcoin showed signs of life above $34,000, including a 15.7% gain in Ether (ETH) price that briefly lifted the top altcoin back above $2,100. 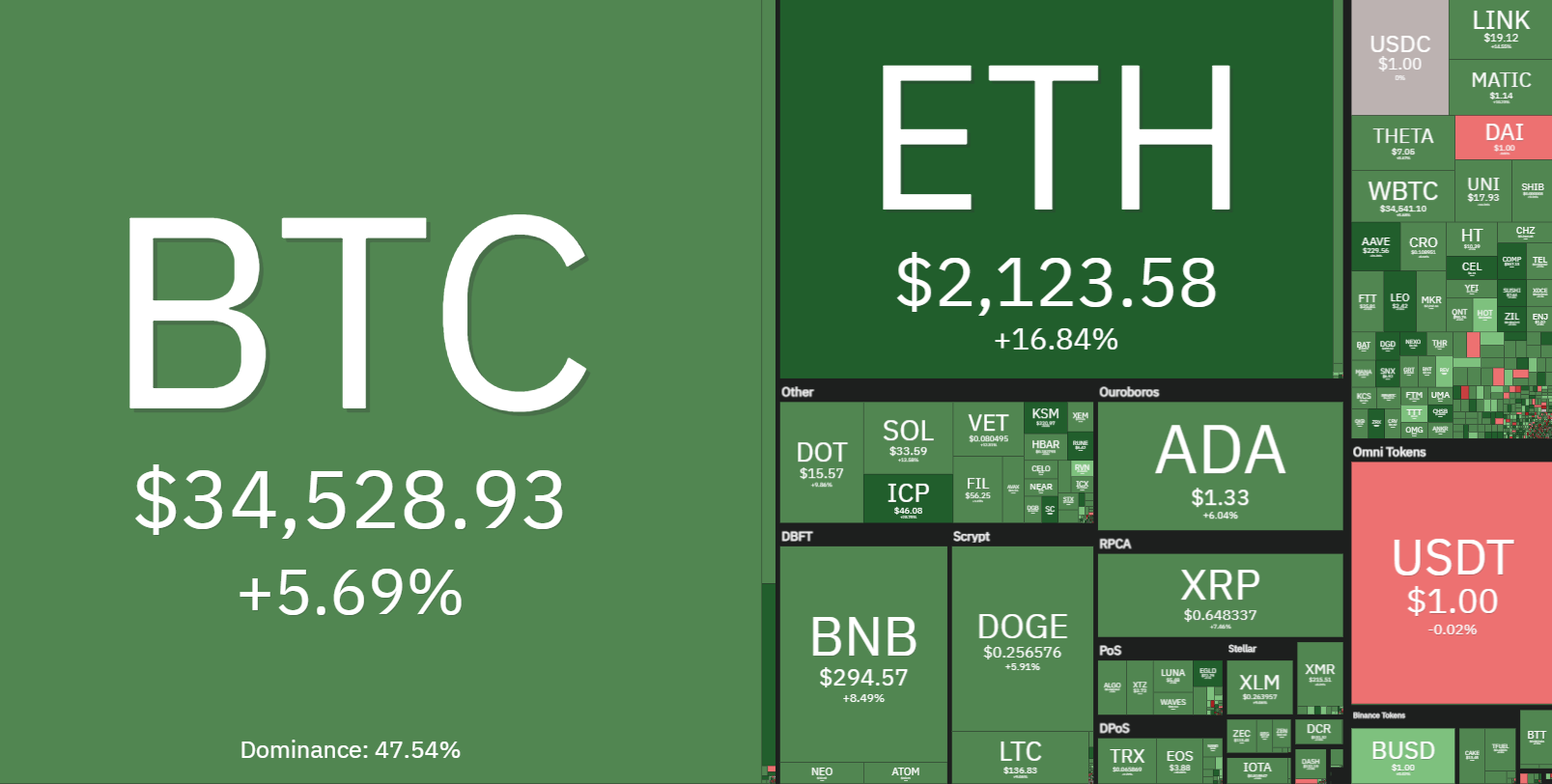 The best performance of the day was posted by Populous (PPT), which surged 100% to an intraday high at $2.67, while IoTeX (IOTX), Kusama (KSM) and Compound (COMP) all registered 33%.