Ark Investment Management recently amended its filing for its ARK Next Generation Internet (ARKW) exchange-traded fund (ETF) with the United States Securities & Exchange Commission (SEC). The revision would allow the fund to invest in crypto ETFs in Canada.

The American investment management firm’s revision of its ARK Next Generation Internet ETF stated that the fund may have exposure to digital assets, including Bitcoin, through an investment in a grantor trust or with other pooled investment vehicles, including ETFs in Canada.

The revised document also stated that the fund may invest in the Grayscale Bitcoin Trust.

Bloomberg ETF analyst Eric Balchunas suggested that Ark Invest was looking to replace the fund’s investment in GBTC with a Canadian ETF. The firm’s fund holds 8.5 million shares in the Grayscale Bitcoin Trust, which is down 22% year-to-date.

Since Canadian ETFs are tracking better, Balchunas further predicts that ARKW is looking to swap out GBTC for a Canadian Bitcoin ETF.

The company’s CEO, Cathie Wood, has been a longstanding Bitcoin bull and has created a BTC ETF in partnership with 21Shares earlier in the year. The investment firm has filed the Bitcoin ETF, which would track the performance of the leading cryptocurrency, with the SEC.

Wood further emphasized that she forsees a future where Bitcoin is part of a balanced investment portfolio. She added that if 1% of the corporate cash of every company in the S&P 500 were converted to BTC, the bellwether cryptocurrency would reach over $72,000. Should this cash level increase to 10%, the world’s largest digital asset by market capitalization would reach over $400,000.

Unlike the United States, Canada has approved multiple cryptocurrency ETFs this year. 3iQ, which launched its Bitcoin ETF in April this year, has already seen its assets under management reach over $946 million.

Bitcoin price appears to be losing momentum as a death cross emerges on the 4-hour chart. Triggering a sell-off, BTC is scouring for support to prevent further losses.

The 50 four-hour Simple Moving Average (SMA) trends lower, knocking against the 200 four-hour SMA, as the recent flash crash took Bitcoin price to under $43,000. 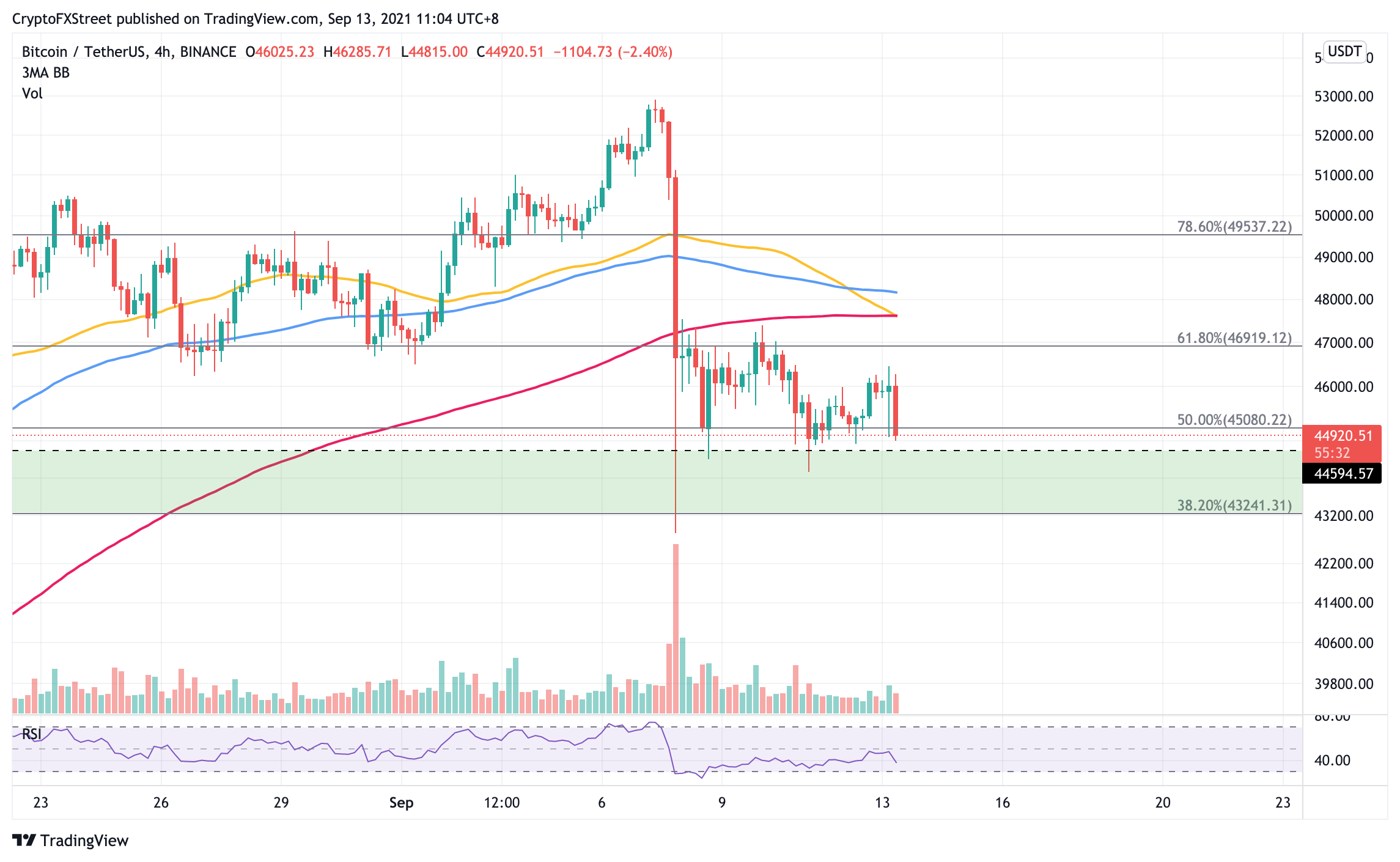 Bitcoin price is expected to continue to move sideways before directional intentions materialize. An increase in buying pressure may incentivize BTC to tag the 61.8% Fibonacci extension level at $46,919 in the near term.