Coinbase, a U.S-based cryptocurrency exchange, announced on March 23 the addition of three new cryptocurrencies – Ankr, Curve DAO and Storj – to its platform. As a result, the said coins have seen their price increase massively.

Among the three, the Storj price saw a 144% bull rally on March 23. On the other hand, the Curve DAO price surge was the most underwhelming.

Starting immediately, we will begin accepting inbound transfers of ANKR, CRV and STORJ to Coinbase Pro. Trading will begin on or after 9AM Pacific Time (PT) Thursday March 25, if liquidity conditions are met.

This pump in asset prices after getting listed on a major exchange like Coinbase is commonly known as the “Coinbase Effect” and was also seen in recently listed tokens like Cardano, Polygon, Filecoin, Aave, Sushi, and so on.

Ankr is an Ethereum-based distributed computing platform, and its native token is ANKR. After the announcement, the ANKR price surged 75% from $0.068 to $0.12.

Investors seem to have begun booking profits after hitting this local top. As a result, the Ankr price has dropped nearly 22% as it trades around $0.099.

If market participants continue to book profits, this correction will likely push the utility token toward the Momentum Reversal Indicator’s breakout line at $0.095. However, if sellers persist, the ANKR price could slide 10% toward the 23.6% Fibonacci retracement level at $0.084.

On the flip side, if the Coinbase Effect continues to inject new buyers, then the newly-listed token is bound to surge higher.

A decisive candlestick close above $0.10 will confirm the bullish momentum and can potentially increase the Ankr price 20% to $0.12, coinciding with the 50% Fibonacci extension level.

Curve DAO price saw a 45% pump in its price, which has pushed it toward the upper trend line of an ascending parallel channel. Now, CRV faces a supply barrier at $2.91, coinciding with the 78.6% Fibonacci retracement level.

A decisive 6-hour candlestick close above this level confirms buyers’ presence. In such a case, the Curve DAO price could climb 10% toward the first resistance level at $3.24. Following this, CRV might even breach through the ascending parallel channel’s upper boundary at $3.5 and surge toward the 127.25% Fibonacci extension level at $3.71. 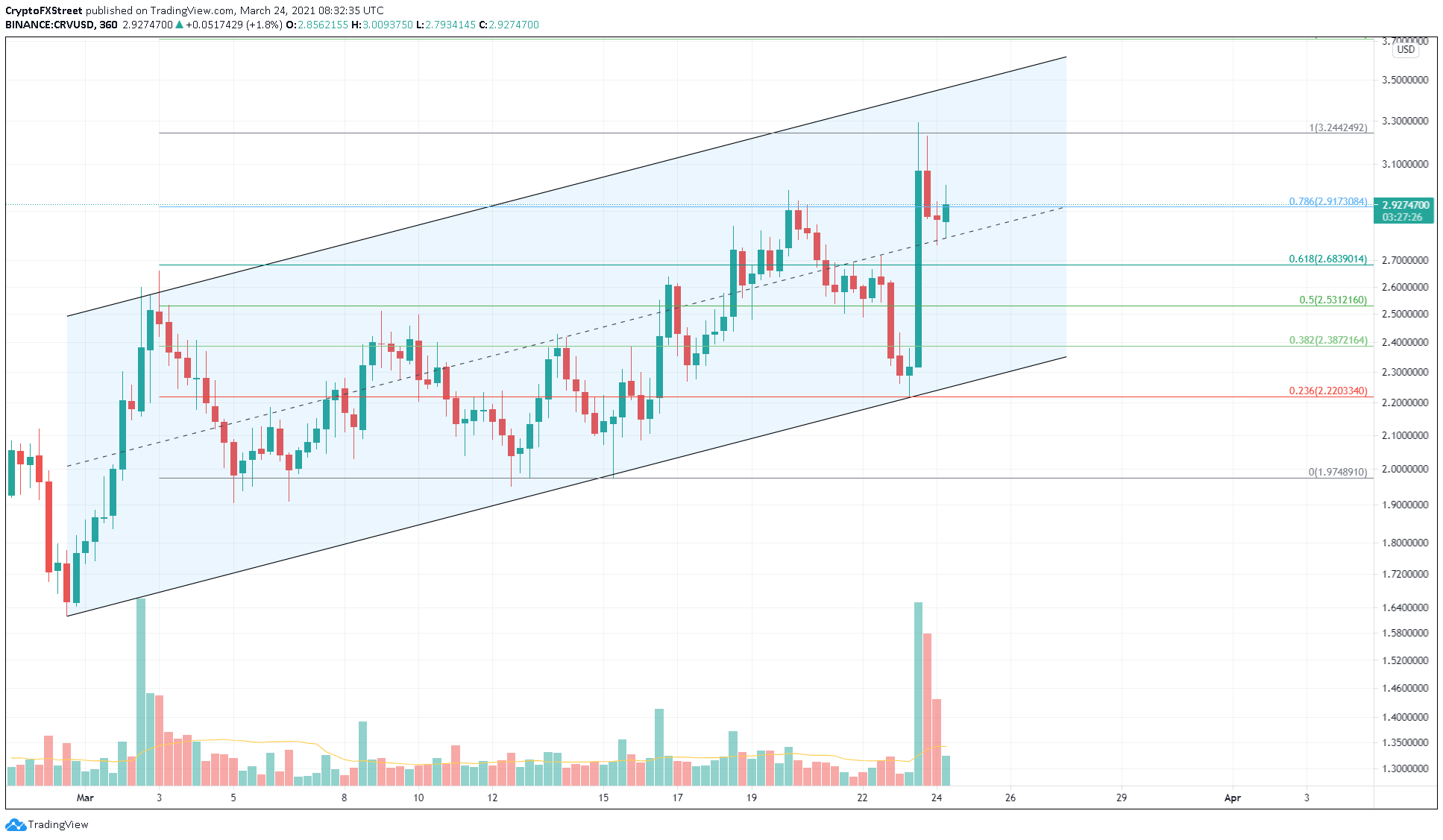 While Curve DAO token’s outlook seems bullish, a failure to sustain above $2.91 could spell disaster for the governance token.

In such a case, the CRV price could slide toward the 61.8% Fibonacci retracement level at $2.68, the first significant demand barrier. If sellers manage to break through, Curve DAO might head to a stale support level at $2.53.

STORJ was the third cryptocurrency to be listed on Coinbase. It is an Ethereum-based token that powers a decentralized network known as Tardigrade. The Storj price surged a whopping 144% after the listing news and showed no signs of slowing down.

At the time of writing, STORJ trades between the 100% and 78.6% Fibonacci extension levels, running from $1.9 to $1.58. Therefore, STORJ could head either way, and its direction can be discerned only after it breaches the barriers mentioned above.

A decisive 6-hour candlestick close above $1.9 will indicate the bulls regime and propel the cryptocurrency by 25% to $2.38 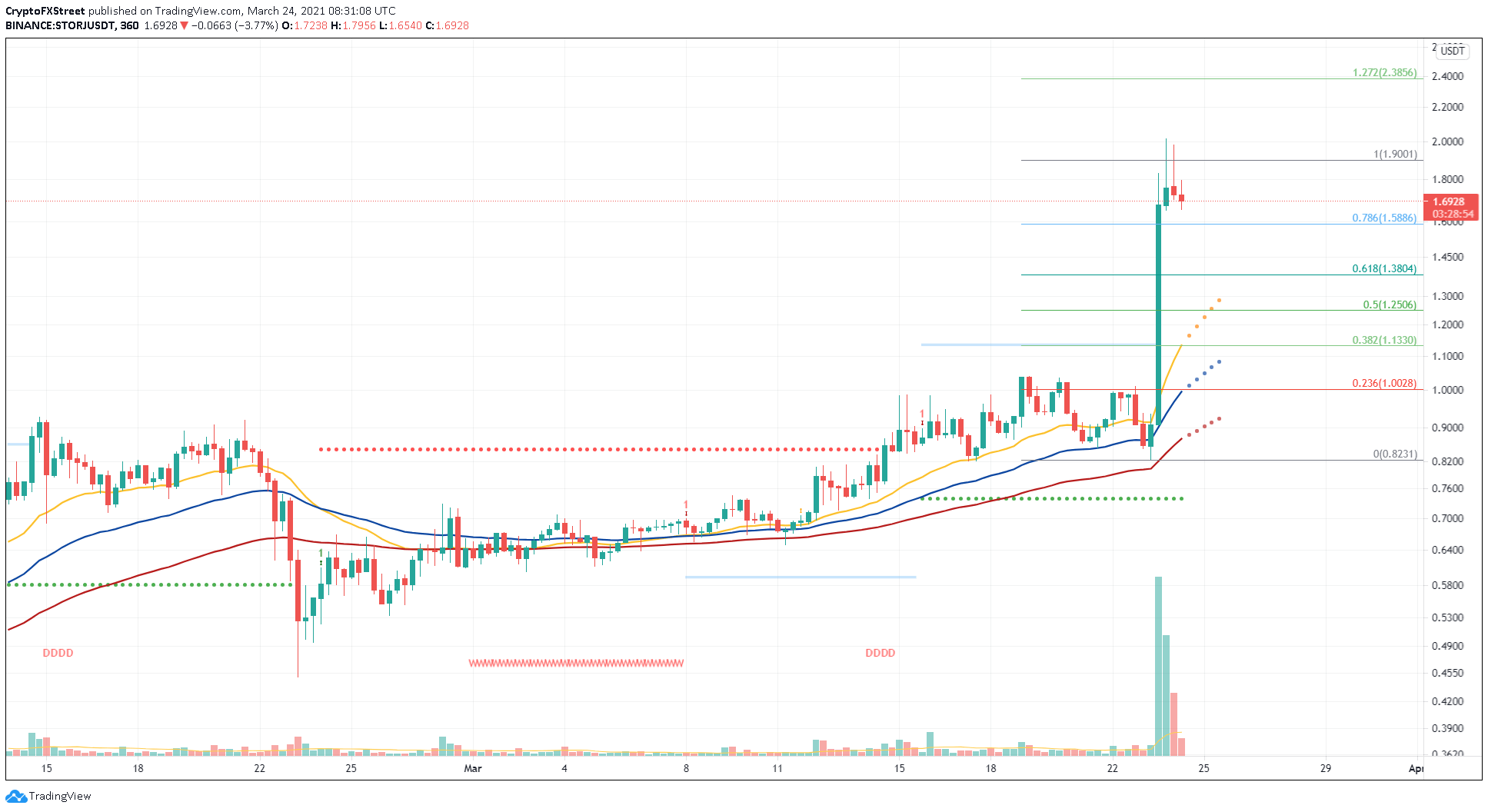 MRI’s breakout line coinciding with the 38.2% Fibonacci retracement level at $1.13 will play a crucial role. If this barrier is pierced to the downside, the 144% increase in its market value could come undone.