Recently, there been a noticeable fall in the value of the Yuan (CNY) relative to the Dollar (USD). With the Dollar having a strong finish to the year and the Yuan falling steadily to its weakest level for eight years, the question is where a new level of support will be established. Once the Yuan stabilises against the U.S. currency, there is an argument for a measured investment, banking on the longer-term strength of the Chinese currency.

The PBOC's (People's Bank of China) proven willingness to intervene, despite moves toward liberalization, complicates the matter. Will we see a true level of support for the currency, or will the Chinese Central Bank step in to prop up its currency, risking speculation over its willingness to support the Yuan in the medium to long-term at an artificially high valuation? Should the Chinese step in to support the currency before markets feel its price has been fully corrected, a mid-term rally is unlikely to be in the offing. Market sentiment may, however, be influenced by this and the PBOC may find that its intervention point mirrors expected base-levels of support.

"Chinese policymakers have been unfazed by the yuan's recent slide, but are ready to slow its descent for fear of fanning capital flight if the currency falls too quickly through the psychologically important 7-per-dollar level, policy advisers said" - Kevin Yao, Reuters

Chinese policy-makers, as per Reuters, believe that intervention is not thought to be imminent, however 'if the pace of depreciation is too fast, if it [the Yuan] hits 7 before the end of this year, the central bank will control it.' Furthermore, former central bank advisor Li Daokui, now professor of economics at Tsinghua University, expects any falls in the value of the Yuan to be capped between 3 and 5 percent. Such expected support suggests that a medium-term Yuan rally is unlikely. Analysts such as Yu Yonding, also a former advisor to the PBOC, however, argue that Yuan devaluation is as the result of a falling trade surplus and is not related to economic fundamentals. This suggests that there may be an unexpected bounce-back in the value of the Chinese currency in 2017 should markets begin to see the Yuan as undervalued. This might happen as a result of a bumpy first hundred days for the U.S. President-elect, a rise in Chinese exports as a result of devaluation or a general rising weakness in emerging economies which might spur investors to spread their exposure in Asian markets further than the relative safe-haven of the Japanese Yen. In fact, it is worth keeping an eye on this last currency pairing (JPYCNY) as a way of spreading the risk. Moving your Yuan holdings into the Yen and tracking the market while you wait for a Chinese rally might end up being a good idea. 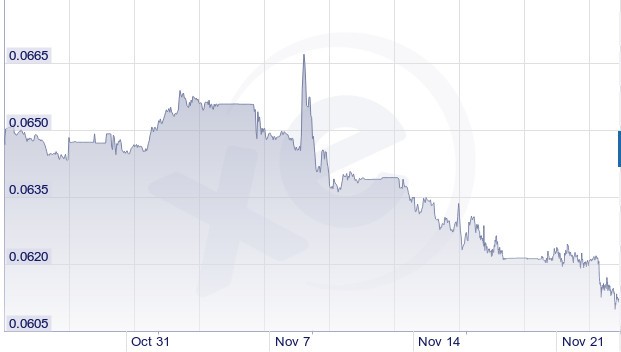 Looking long term, the key concerns for the USDCNY pair with day-trading limited to a 2% margin each-way are geopolitical concerns (see Trump) and the establishing of a new base-level of support for the Yuan.

During his election campaign, Trump lambasted China as a currency manipulator and threatened to hit the Asian country with 45% tariffs, however starting an all-out trade war does not seem to be prudent. Not least when the US may need to sell bonds in order to support the signature Trump infrastructure project. China, let it not be forgotten, is a big buyer of U.S. Treasury Bonds.

Tariffs, at least in the medium term, seem unlikely. Marc Chandler, global head of currency strategy at Brown Brothers Harriman, agrees. He suggests that the far more moderate Barack Obama was not adverse to castigating China whilst on the campaign trail. Unless Trump finds himself between an enormous rock and an extremely hard place in early 2017 tariffs, while an outside risk, should not be a concern for the Chinese economy. Further to this, Dollar strength and likely rising U.S. inflation ought to help to make Chinese imports more attractive to the U.S. market, which would help to alleviate concerns over the People's Republic's trade surplus.

There is, however, substantial uncertainty about the base-level of support that the Yuan will come to rest at, seeing as the USDCNY rate of 7 seems set to be tested before the year's end despite policy makers' assertions. Such an event seems likely given how quickly forecasts have become out of date. Only last week Stephen Innes, senior trader at Oanda, argued that the Yuan would gradually depreciate to a level of 6.9 against the dollar by the end of the year. This level has already been broken. With just over a month remaining in 2016, a level of 7 is very much within the bounds of possibility.

Beijing's biggest concern is that sharp fall in the Yuan will trigger the sort of capital flight that followed August's surprise devaluation of the currency, which sparked fears the health of the economy was worse than Bejing had let on...

Outflows from the $3 trillion-plus reserves [...] have since continued at a much more subdued pace but the yuan's decline in recent weeks has raised some concerns that capital flight could pick up again if the Yuan slides too fast.

An interesting graphic from the website Zerohedge suggests that Chinese analysts may be underestimating the risk of capital flight post-Trump with downwards seemingly being the only direction for the Asian currency at present.

No Trump Bump for the Yuan. Source: Zerohedge.com

Such fears, while noted, are not certainties. Chinese President Xi Jinping, in talks with Trump, suggested that cooperation was the only choice for relations between the world's two largest economies. Trump agreed that the two had established a 'clear sense of mutual respect'. This, when combined with the general opinion that the Yuan has a further 3-5% to fall, suggests a final base-level of support for the Yuan being established at the mid 7.2 mark, with 7.3 at the extreme.

Once this base-level is reached, with exports likely to grow in 2017 by 8% according to Credit Suisse, it might be time to take a 2017 position in the Chinese currency. Hypothetically, as 2017 begins with Chinese exports rising (off-setting balance of trade fears), GDP rising both domestically and at home (again according to Credit Suisse forecasts) and likely inflation increases in Europe and the U.S. further fuelling the attractiveness of Chinese goods, there is an outside chance of a bullish Yuan by the end of next year.

The long-term prospects of the People's Republic, potential political ructions aside, remain steady, and growth is likely to continue albeit at a slower rate. In FX terms, however, the USDCNY pair for the foreseeable future is likely to consist of one-way traffic in favor of the Greenback. If you hold Yuan, it would seem prudent to focus on other currency pairings in the short to medium term, such as JPYCNY where the potential to off-set your Dollar losses exists. Should you be thinking of a near-term position regarding the CNY, betting against it until it establishes a new level of support might appear the best choice. With the psychological level of 7 Yuan to the Dollar possibly being breached by the end of the year, and sharp falls likely in the immediate aftermath of such an event, shorting the currency against the Dollar could be profitable. If, however, you are interested in taking a longer term view, the Chinese currency ought to return to 2015 levels within the next twelve to eighteen months. This being the case, once base-levels in the USDCNY pair of between 7.2 and 7.3 are reached, a strong long-term position could generate significant returns.