One of the main themes of my book, Zero Hour was that we are in a period of political and social revolution, the likes of which we haven’t seen since the late 1700s, with the convergence of democracy with the American Revolution; free market capitalism; and the Industrial Revolution…

1776 was the year all three came together. We had the Declaration of Independence, the patenting of the steam engine, and the greatest economic book of all times: The Wealth of Nations, by the first real economist, Adam Smith.

If you don’t think cycles are important, then ignore that date!

Look at this chart from my book: 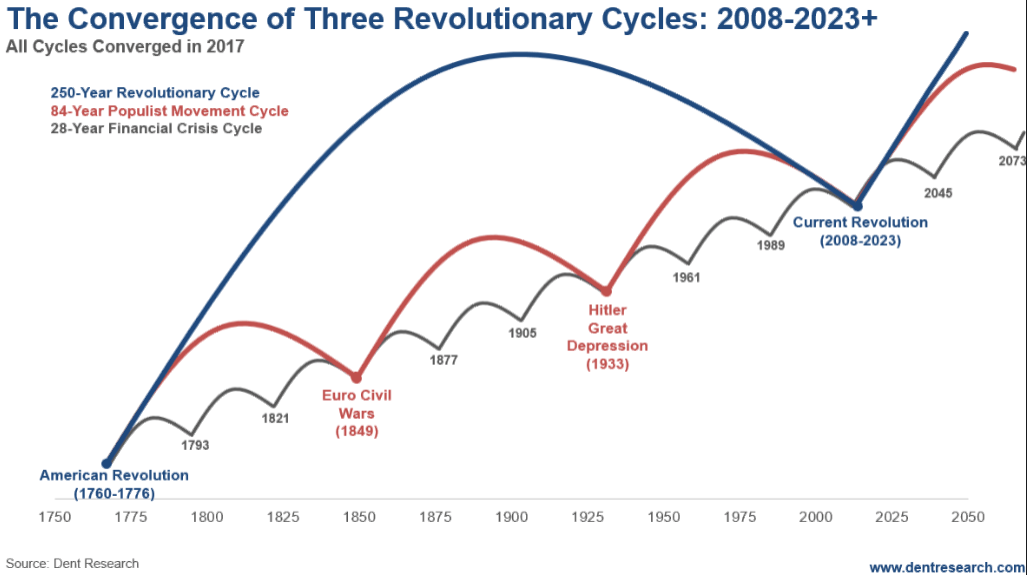 Our kids are going to look back at this period and say, “What the hell happened here?”

Is there anything in human history more important than the convergence of democracy, free market capitalism, and the Industrial Revolution? That made the Agricultural Revolution 10,000 years ago look like nothing.

Why? The exponential nature of technology and evolution…

And the clean-up hitter home run of the 500-year Mega-Innovation/Inflation Cycle starting in the very late 1800s. Oh, and then the larger 5,000-year Civilization Cycle that first saw the Agricultural Revolution and settling into small towns around 8,000BC; then the advent of cities, writing and the wheel around 3,000BC; and currently, the advent of electricity, computers, the internet and mega cities.

When I talk about long-term things like this, people look at me like, “Harry, you need to get a girlfriend.”

We have seen more economic progress in the last 120 years than all of human history combined – and we are only halfway through that 500-year up-cycle that peaks around 2150. That’s why it’s important to study longer-term cycles. It’s also why I make my blockbuster issue of Leading Edge from December 2018 available for all readers as a great resource to give to your kids (who will live through much of this and live much longer), and anyone you want, or they want.

When Zero Hour came out, Brexit and Trump were already in play. I talk about 50/50 polarization everywhere in the world. Today, the U.K. is still about 50/50 split on whether to leave the European Union. The U.S., in its modern-day Civil War, is near 50/50 red vs. blue, with little indecision, on whether to impeach Trump as he throws one wrecking ball after the next domestically and globally.

There has been terrorism non-stop since 9/11, and now domestic terrorism leads here with angry white men shooting innocent kids in schools and malls – non-stop!

There have been endless civil wars around the world, concentrated in the Middle East after the “Arab Spring,” most of which have largely thus far failed to spawn democracy there due to still largely backward cultures.

Now what do we have? A major revolt in Hong Kong against the Neanderthal Chinese communist autocracy in the age of what I call the bottoms-up “Network Revolution” of this very 250-year cycle.

Congratulations to those brave revolutionaries there, and they aren’t giving up. I feared that would not happen due to the scarcity of young people who drive such revolutions due to China’s One Child policy since the 1970s from that same mafia-like, outdated government.

And just this week: major revolts against the even-more Neanderthal government in Iran, where over 200 people have bravely died. Iran has the most educated and pro-western populace in the Middle East, but a government as backward, or more, as Saudi Arabia.

This revolution against top-down autocracy and outdated governments and politics will continue to mushroom for years to come, and the greatest financial crisis of our lives between 2020 and 2023 will only exacerbate it…

And next comes top-down management in corporations – like the top CEOs buying back their own stocks into the top of the biggest bubble in history. Oh, that will look brilliant in the years ahead.

Gold prices remain positive while taking rounds to $1,583, following the intra-day high of $1588.70 flashed at the week’s start. The yellow metal recently benefited from fears of China’s coronavirus outbreak.