Wall Street suffered losses at the end of Wednesday’s session as the crisis in Eastern Europe and its global economic consequences continued to hurt the market climate. The United States has accused Russia of war crimes and revealed another round of sanctions against Moscow this week, ostensibly to heed Zelensky’s call for more pressure on Russia from Western powers, as ongoing peace talks between Moscow and Kiev continue to fail.

The USA 500, USA 100 and USA 30 indices fell more than 1% on Wednesday as the negative climate and market expectations for a tighter monetary policy by the Fed and growing inflation concerns returned to spook markets as oil prices continued to rally. Markets are speculating that the Fed may raise interest rates by 50 bps in May, following aggressive comments by several policymakers this week. In a speech to the National Association for Business Economics, Fed Chairman Powell opened the door to more aggressive steps to tame inflation, which is now at a 40-year high.

Fears of inflation due to the protracted conflict and diplomatic stalemate continue to pump up energy prices, after briefly cooling down. The growing uncertainty has raised fears of potential additional sanctions against Russia from America’s allies that could end up disrupting supplies. Russian President Vladimir Putin said on Wednesday that hostile countries should pay for Russian gas in rubles. The comments came after the European Union said it intended to move away from Russian gas and might even target the country’s energy sector with sanctions over the conflict in Eastern Europe.

USOil soared over 5% and trades around $115.00, while UKOil rallied over 6% and peaked at $123.75. The disruption to Russian energy supply, the looming threat of EU sanctions and attacks on Saudi oil facilities all indicate that oil supplies will remain tight until the conflict is resolved. China and India, meanwhile, could benefit from buying Russian oil at a discount as long as they are not included in the list of countries targeted by Putin.

Meanwhile, the price of the precious metal Gold strengthened on Wednesday and recovered from the previous day’s losses. XAUUSD has seen gains above 1%, surpassing the previous day’s high and trading around $1945. Traders remain uncertain, between the Fed’s hints of more aggressive rate hikes in the future and the consequences of the ongoing  War in Ukraine as it enters its second month. An increase in interest rates that is too large is signaled to hamper growth, while the current inflation will create a higher burden and cost of living crisis. On the other hand, an additional shock wave from the conflict could turn price pressures into hyperinflation which will further complicate central bank policy. Thus, it is estimated that safe haven assets will remain in high price conditions for quite a long time. 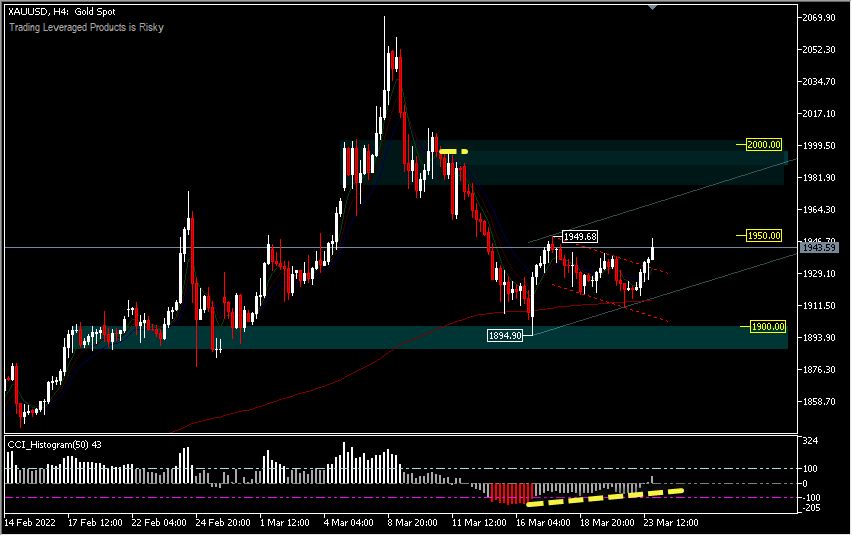