“The US dollar will collapse or it will be replaced by another currency” – we hear such statements all the time. Are they true? We decided to check these claims – so we invite you to read our today’s article about the US dollar’s international supremacy and find out whether the greenback’s demise is likely in the foreseeable future. Let’s also draw implications from the analysis for the precious metals market.

We have heard about the fall of the US dollar’s significance for over half a century. In particular, the rise of China’s economy threatens the greenback’s dominance. Trump’s unsound fiscal policy and the recent Powell’s dovish turn only reinforce these fears. So, let’s analyze whether such a scenario is likely in the foreseeable future and let’s draw implications for the precious metals market.

The dollar’s supremacy started around 1955 when reserves held in greenback exceeded those held in pound sterling. Since then, the US dollar is a king. To be clear, we do not maintain that greenback is a wonderful currency without problems and better than gold. No, it simply has no competitors among other fiat currencies. It is a king of beggars.

Initially, after the gradual demise of British currency, the only possible alternatives to the greenback were the Japanese yen and the Deutsche Mark, as Japan and Germany noted impressive pace of economic development. However, both economies were much smaller and with less liquid financial market. Moreover, the US army stationed in both countries, which cast a shadow over their currencies. The situation has not improved since then. In the 1990s, Germany struggled with the reunification, while Japan fell into multi-year stagnation after the burst of the enormous asset price bubble.

Actually, one may convincingly claim that Japan has not fully recovered yet, as the country still faces deflation, weak banks, adverse demographics, sluggish growth or even periodic bouts of negative growth, and negative interest rates. Indeed, the Bank of Japan is running the most accommodative machine of any central bank that it systematically important. Hence, yen is not likely candidate to replace the US dollar.

Many analysts believed that 21th century will bring some changes, as the ECB launched euro – a new, common currency for several European countries. However, for almost every economist with some knowledge about the international monetary system, it was clear that a project based on a unified monetary policy and heterogeneous fiscal policy (each member of the Eurozone conducts its own policy) could not pose a serious threat to the US dollar. The euro is too fragile, which was revealed by the Great Recession and the sovereign debt crisis. The current Italy’s problems are just an old shortcomings in a new disguise (I write more about the latest twenty years of the Eurozone in the February edition of the Market Overview).

Last but not least, Germany is also an obstacle for euro to gain in importance. You see, Berlin favors the policy of a balanced budget – for us it is a very sound policy, but it results in the small supply of German Bunds. So, investors prefer to park their funds in the US Treasury market, which is the most liquid market in the world.

If not euro and not yen, so maybe yuan will dethrone the US dollar? This is what many analysts expect, based on China’s economic potential. After all, the IMF included the Chinese renminbi into the SDR basket in October 2016. However, the yuan is not likely to replace the US dollar anytime soon. The main reason is shallow financial market in China. It still lacks transparency and it is controlled to large extent by the authorities. Do you remember August 2015, when the People’s Bank of China devalued the currency? I bet you do.

Let’s look at the chart below. The share of the yuan in global currency reserves amounted to 1.8 percent in Q3 2018. It does not look like a great threat for US dollar, does it? 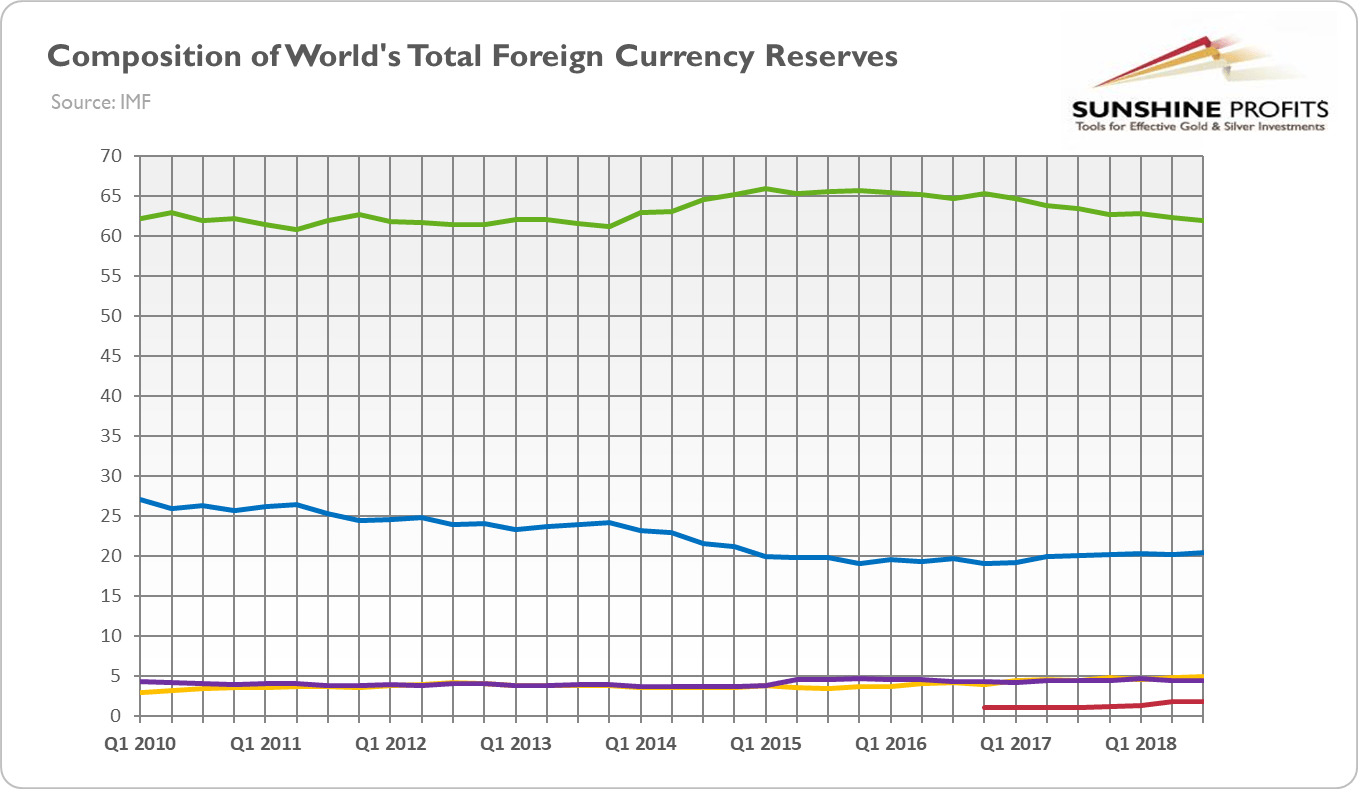 Investors should remember that there are four things needed in order for a currency to play a global role: size, stability, liquidity, and security. Although China’s economy and trade payments are big, the yuan is not stable, not liquid and not secure. The financial system is still heavily controlled by the authorities and it is not open and transparent.

Although the share of the US dollar in the world’s total foreign reserves has declined somewhat since 2015, it remained dominant, with share above 60 percent. The euro, which is the second most popular reserve currency, has share amounting to 20 percent, or one third of the greenback’s share. Moreover, although dollar’s role as official reserve diminished slightly, its share in bank external claims has risen. Similarly, volumes through U.S.-based dollar wire transfer and settlement systems have also continued to rise.

To sum up, Tina says that the US dollar will remain the world’s global reserve, despite all its shortcomings. Who is Tina? It is the slogan used by Margaret Thatcher: “there is no alternative”. Yen? Let’s be serious, Japan still cannot stand on its own feet after post-bubble recession, approaching the third lost decade. Euro? No way, as long as there are doubts about the Eurozone’s survival. Yuan? Maybe someday, but not anytime soon, as the renminbi is not freely floating, while China’s capital markets are not yet fully open.

The implications for the precious metals market are clear. The gold bulls should not count on yuan replacing the US dollar. It is not going to happen anytime soon. You may not like America and its currency, but the fact is the greenback will remain the dominant fiat currency. US dollar will remain relatively strong, which will be a headwind for the yellow metal. However, when China liberalizes and opens its capital market, the gradual reshuffle in the composition of the foreign reserves may occur, which could support gold.