May was certainly a positive month for the yellow metal. Gold could keep its momentum later this year, but a lot depends on the Fed and inflation.

We left May in the rearview mirror, and as the chart below shows, it was the second positive month in a row for the yellow metal. Gold rose 7% last month – this is 12.3% since the local bottom on March 31, 2021. The jump was driven mainly by inflation fears, a weak greenback and a decrease in real interest rates. 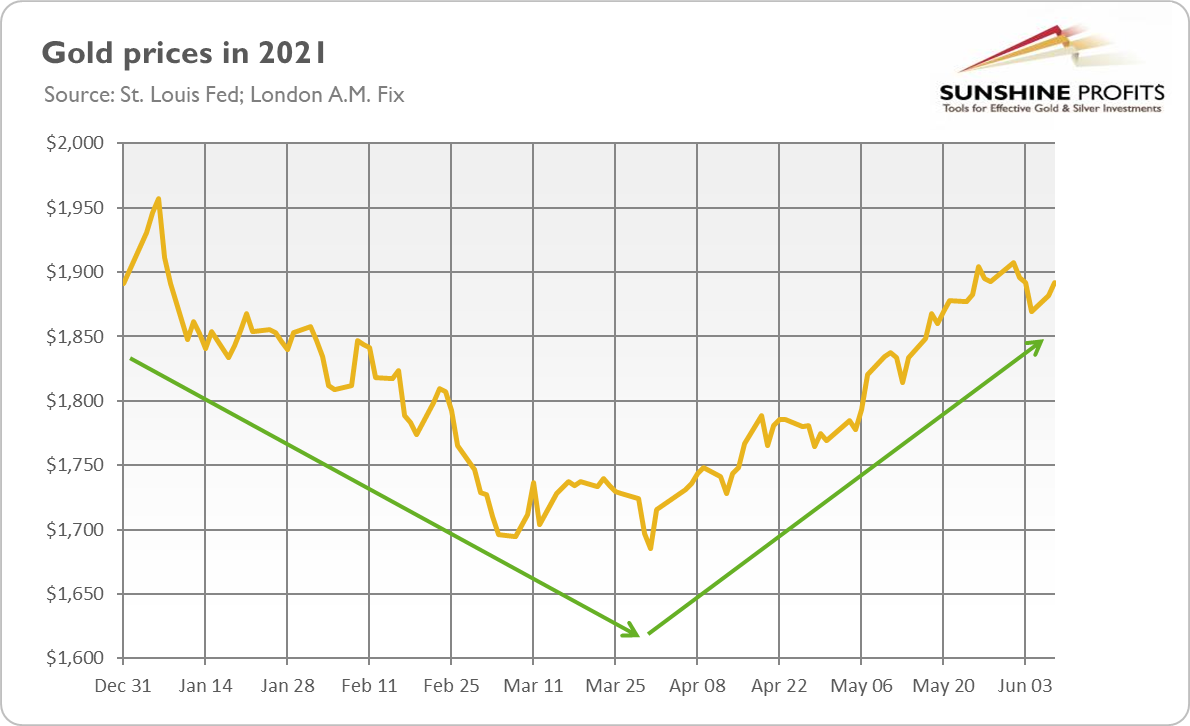 Hence, I was right: the second quarter has been so far much better for the shiny metal than the first one, in which it declined by 11%. Gold even jumped temporarily above $1,900 at the turn of May and June. Since then, it has been fluctuating around this level. All this means that the yellow metal fully recovered its Q1 losses, finishing last month virtually flat year-to-date.

Now, the key question is: what’s next for gold? Outlooks are, as always, divided. Some analysts point out that gold’s struggle to move decisively north above $1,900 amid all the increase in the money supply, public debt and inflation is disturbing and has bearish implications for the future. For instance, the French bank Société Générale still believes that we will see $2,000 per ounce by the end of the year, but its conviction towards this forecast has weakened. I have to admit – the lack of a stronger rally in gold is something I also worry about.

But on the other hand, some believe that gold is still in a long-term bull trend. For instance, the World Gold Council, in its latest Gold Market Commentary, points out that sentiment towards gold became more bullish in May, as net positioning on COMEX futures rose to its highest level since February. Moreover, not only gold ETFs recorded their first monthly inflows since January 2021, but also the highest ones since September 2020.

Furthermore, the WGC’s 2021 Central Bank Gold Reserves Survey reveals a slightly stronger conviction towards gold, as there is a growing recognition among central banks of gold’s performance during periods of economic crises. The report notes that 21% of central banks expect to increase their gold reserves within the next year (value relatively unchanged from last year’s survey) and that no central bank expects to sell gold this year – down from 4% in 2020.

Also, Commerzbank remains bullish on gold despite recent volatility. Although the German bank expects that the Fed will start tapering its quantitative easing by the fourth quarter, it’s forecasting rising inflation. As a result, nominal interest rates will stay below the inflation rate leaving real bond yields significantly below zero.

What does all this imply for the gold market? Well, there are both downside and upside risks for gold in the future. Possible drawbacks are the unwinding of the Fed’s bond-buying program and the new tightening cycle. Strengthening expectations of asset purchases tapering and normalization of the ultra-dovish monetary policy could trigger an increase in the interest rates and outflows from the gold market.

To the other group of factors, I would include higher inflation. After all, we have never seen such coexistence of dovish monetary policy and easy fiscal policy. Not surprisingly, investors started to worry about record-breaking inflation. As the chart below shows, market-based probabilities derived from options (calculated by the Minneapolis Fed , which computes probabilities from option prices) show that the previous expectations of the CPI annual rate above 3% over five years have significantly increased recently. Higher inflation would increase demand for gold as an inflation hedge and decrease real interest rates, supporting gold prices. 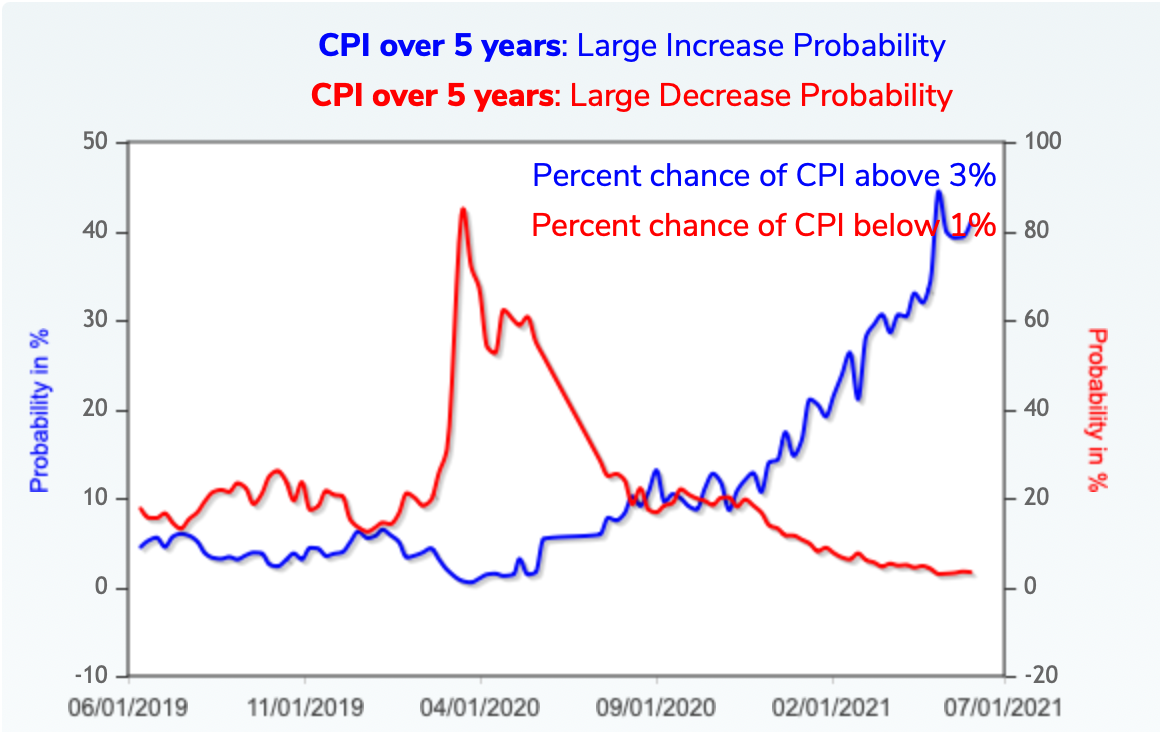 So, gold’s future depends on the Fed’s reaction to rising inflation, or whether or not investors will focus on nominal and real interest rates. If the US central bank stays behind the inflation curve, real interest rates will stay in the negative territory, supporting the price of gold. However, if the Fed tightens its monetary policy decisively, or if investors focus on rising nominal bond yields in a response to inflation, the yellow metal may go down.

To that point, the most recent changes in the Fed’s framework, comments from the FOMC members and disappointing data about the US labor market suggest that we are far away from any serious tightening. So, gold has room for moving higher.

Having said that, it seems that gold needs more negative events (or even a kind of financial crisis ) to rally decisively further. So far, the US economy remains in the boom phase and higher inflation doesn’t seem to significantly disrupt the functioning of the markets. Perhaps gold bulls will have to wait a bit longer until we move from reflation to stagflation . Today’s report on inflation and upcoming FOMC meeting could provide more clues about gold’s future – stay tuned!

EUR/USD has dropped to around 1.2150 after the ECB prolonged its high pace of bond buys. The dollar is advancing after US CPI hit 5% YoY in May, beating estimates.