Biden scaled back on his infrastructure bill. However, with all the remaining cards still in play, his economic agenda should be positive for gold.

Inflation, bond yields, monetary policy… that’s all interesting and crucial to understand trends in the gold markets – but, hey, what’s up in politics? A lot has happened recently on this front. In particular, last month, the world was shocked by the chaotic withdrawal of US troops from Afghanistan. The messy pullover and the quick takeover of the country by the Taliban is not only the end of Biden’s honeymoon but also America’s great failure. Some analysts even say that the fall of Kabul is another Saigon time for the US. Indeed, it goes without saying that the collapse in Afghanistan is a huge blow to America’s reputation. So, it could weaken the faith in Uncle Sam and its currency, which could be positive for gold in the long run.

However, the end of the US mission in Afghanistan doesn’t pose any direct threats to America (although terrorism could thrive under the Taliban regime) or to the greenback. So, I don’t expect any substantial, long-lasting moves in gold prices (always remember that geopolitical events cause only short-lived fluctuations, if any).

Another recent important development in the US policy was that the Senate passed a $1 trillion bipartisan infrastructure bill, which is a big step in pushing Biden’s economic agenda through Congress. The economic effect will probably be smaller than expected, as public stimulus rarely works as intended. So, I don’t expect any material impact on gold prices, especially given that this additional government spending has already been priced in.

However, I would like to point out that Biden has scaled back his infrastructure plans from $2.2 trillion and agreed to spend these funds over a longer period. It means that the US fiscal policy, although still unprecedentedly easy, is normalizing somewhat (see the chart below), at least compared to Democrats’ initial huge plans (however, they are still working on a budget resolution that would allow them to approve a complementary $3.5 trillion spending plan). A normalization of the fiscal policy is bad for gold prices, especially when coupled with the Fed’s tightening cycle. 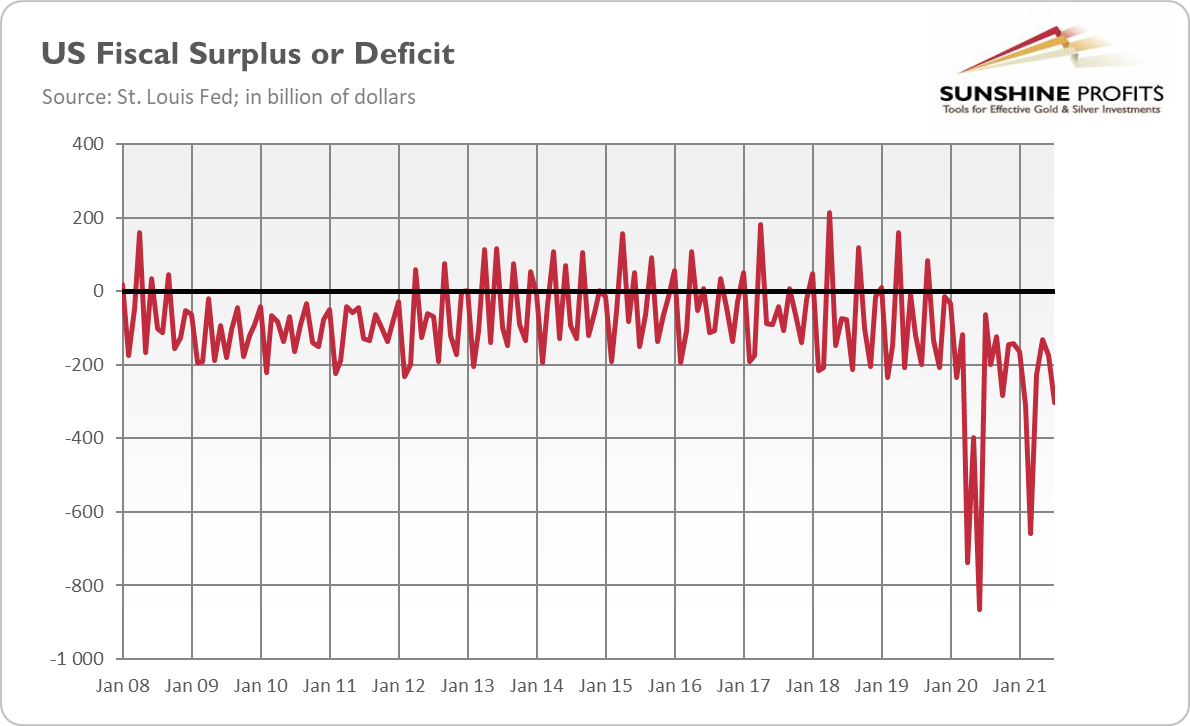 Let’s step back — it turns out that it’s quite fruitful to look at Biden’s economic agenda from a bit broader perspective. It becomes clear that Biden – despite his hatred for Trump – actually continues Trumponomics. Nouriel Roubini calls Biden’s doctrine “neo-populist” and sees the paradox in the fact that it “has more in common with Trump’s policies than with those of Barack Obama’s administration, in which the current president previously served”.

Indeed, every president from Bill Clinton to Obama favored trade liberalization and a strong dollar while respecting the Fed’s independence. They were also understanding the importance of the moderate fiscal policy (although the practice differed, especially after the financial crisis of 2007-9). They were far from being laissez-faire advocates, but at least they didn’t question the economic orthodoxy.

Then Trump stepped in, inaugurating a trade war with China, and imposing tariffs on goods from other countries as well. He also questioned the Fed’s actions, which supported a weak greenback and ballooned fiscal deficits even before the epidemic started.

Biden’s rhetoric is softer and his actions less erratic, but he has maintained Trump’s tariffs, pursuing similar nationalist and protectionist trade policy. He even widened the already large budget deficit, continuing the spending spree financed by public debt. Although Biden doesn’t openly favor a weak dollar, the current administration is far from pursuing a strong-dollar policy. He also supported large direct cash transfers to citizens that Trump started in response to the pandemic. Last but not least, Biden fights with Big Business, introducing some anti-monopoly policies.

What does it all mean for the gold market? Well, the continuation of neo-populist economic doctrine and shifting away from sound economics (I wrote about this earlier this year) implies generally looser monetary and fiscal policies. Larger debts create a risk of a debt crisis, while downplaying the inflationary pressures (as for populists, price stability is less important than employment gains, rising wages, or reducing inequalities) increases the odds of inflation crisis or even stagflation (big government and huge indebtedness could hamper the pace of GDP growth).

As we know from Latin America, the rules of populists and MMT-like policies never end well. And, as we know from the 1970s, constant stimulation of the economy (because there is still some slack) and neglecting the dangers of inflation could be disastrous. So, Bidenomics should be generally supportive of gold.

Having said that, investors should remember that many more factors influence gold prices than just the President’s actions. A part of Biden’s presidency will coincide with the economic expansion from the pandemic recession and normalization of the interest rates that will likely create downward pressure on the yellow metal.