Outlook: We get housing starts and building permits today with low expectations of anything positive. Starts likely fell the same as June by about 2% and permits, by about 3-4% after 10% in June. We also get industrial production, expected up by 0.3%. We shall see what this does for the Atlanta Fed GDPNow, currently at 2.5%. Oh, yes, Canada reports CPI, likely 7.6% y/y after 8.1% in June, while core is expected a bit higher at 4.7% y/y from 4.6% in June.

But the brilliant and sane Ed Yardeni wrote in the FT that “Most Fed watchers seem to spend more time criticising the US Federal Reserve than watching it. It’s easy to do. Anyone can play the game and attacking the Fed is like shooting at sitting ducks: officials at the central bank can’t respond directly given their public role.”

Yardeni is defending Fed chief Powell for saying Fed funds are actually near neutral at 2.25-2.50%, drawing scorn from several sides. But Powell might be right, for two reasons. First, the dollar is up over 10% so far this year, “equivalent to at least a 50-basis-point rise in the federal funds rate.”

In addition, QT in Jun-Aug adds up to a drop of $142.5 billion and scheduled for $1.14 trillion through August 2023. “In my opinion, QT is equivalent to at least a 0.50 percentage point increase in the federal funds rate too.” And it will be more if the Fed gets out of mortgages, as some members favor.

“In my opinion, the markets have already discounted a peak federal funds rate of 3 to 3.25 per cent – which is where it soon will be assuming that the Fed raises the rate by 0.75 percentage points again at the end of September as widely expected.”

This is the first time anyone has explicitly named the level of the dollar and QT as effectively raising Fed funds by 1%, exactly as they teach in Econ 101.

But in the US, yesterday the Empire State manufacturing survey fell a whopping 42.4 points, the most in 21 years if we don’t count the pandemic-driven shock in April 2020. We get the Philly Fed today. Also, the National Association of Home Builders (NAHB) index fell by 6 points when only 1 point was forecast, considered a housing recession as new buyers cancel orders and demand drops. It’s telling that sentiment toward homebuilders fell for the 8th month, with equity prices down 19-36%, according to Wolf Street. 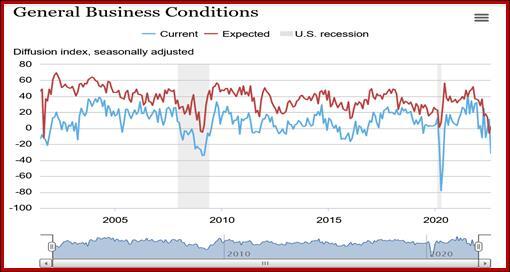 Maybe attention will turn from inflation to growth now that we have slowdowns in Germany and China, even if Japan and the US seem okay, for the moment. Adding to gloom is economist Roubini, who sees either a hard landing or inflation “out of control," according to Bloomberg. The hard landing option is getting some heft behind it. The number of bad news items is starting to challenge the good news items (jobs, inflation down). Yesterday the Dept of Agriculture warned that the drought will wreck the cotton crop. Other commodities–0the bulwark of many a portfolio these days–are dropping due to falling demand, like steel in China as building slows to a crawl.

Global recession? The prospect is not zero probability. The quick and easy deduction is the Fed actually doing what the doves seek–only 50 bp in Sept or 75 then but a lot less later. The CME Fed Watch tool shows the likelihood of the full Monty down to 57.5% from 61.0% only yesterday. If this sentiment catches hold, yields should fall a bit more. But this doesn’t mean a destruction of the safe-haven aspect of the dollar, especially with Germany headed for actual recession. Still, it’s a bit scary.