The Fed has published this month the newest edition of its Financial Stability Report. Generally speaking, the level of vulnerabilities in the financial system has moved little since the publication of the May edition of the report. The most of the US central banks’ observations are reassuring: investor appetite for risk generally appears to have returned to a level in the middle of its historical range, while the core of the financial sector appears resilient, with leverage low and funding risk limited relative to the levels of recent decades.

What is very important in light of the causes of the Great Recession, the largest U.S. banks remain strongly capitalized, while household borrowing remains at a modest level relative to income, as one can see in the chart below. Isn’t that splendid news? Isn’t this time different? It’s bad news for the gold market?

No, and there are two reasons for it. Let’s discuss the first one.

You see, the generals are fighting the previous wars, while the economists and officials are confronting the previous financial crisis. But history never repeats itself, it only rhymes. So the fact that the households are not heavily indebted this time, while big banks are finally well capitalized is praiseworthy, but it is irrelevant. I mean here that the lack of symptoms of the previous economic crisis does not exclude the next downturn, because the next crisis will be different. 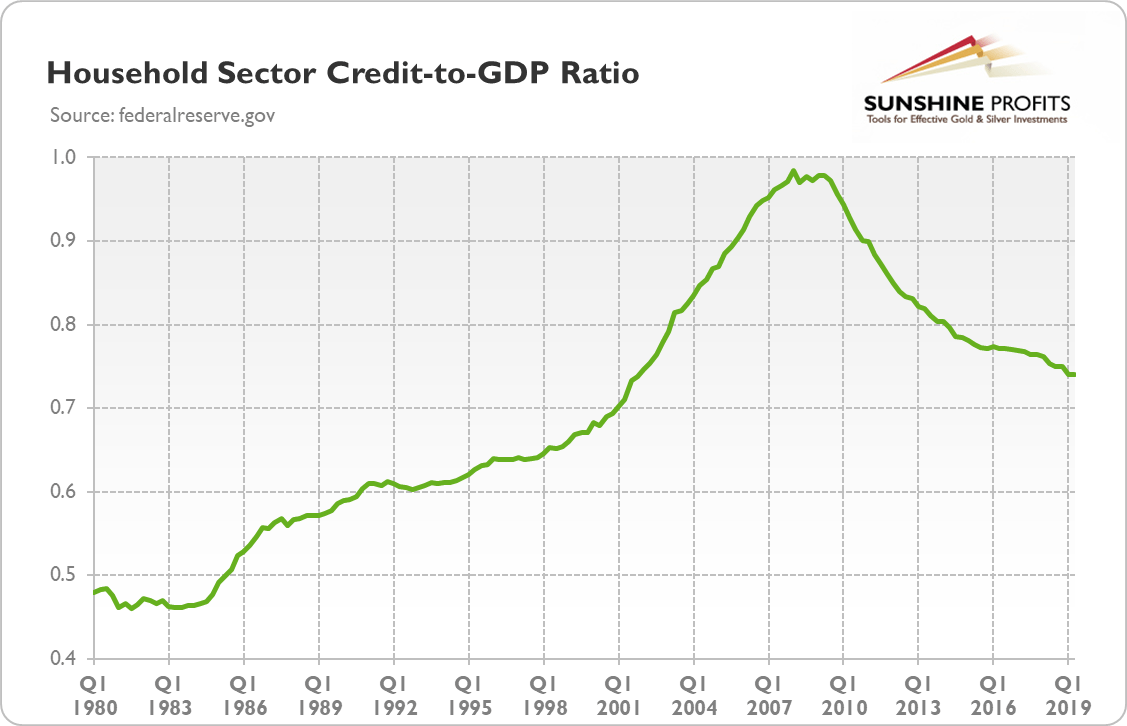 Where can there be an outbreak of the next global financial turmoil? Many people worry about some geopolitical conflicts, including the trade wars, could spill over to the U.S. financial system and negatively affect the global economy. My research shows that geopolitical risks – and they impact on the gold market – are often exaggerated.

The next recession may also begin in China. Because of the size of the Chinese economy, significant distress in that country could spill over to the global markets through a rise in the risk premium, changes in the exchange rates, and declines in trade and commodity prices. Indeed, the pace of China’s economic growth has already slowed down, and the global economy has weakened (while gold shined) in response.

Many market participants express concerns about something else, and this is the second factor that we mentioned previously. That’s something that we will leave to our subscribers, though. If you would like to know what else could be the trigger of the next recession, I encourage you to read the full version of today’s Fundamental Gold Report, which analyzes thoroughly the latest Fed’s report on the financial stability its impact on the precious metals market. In order to receive the following (posted bi-weekly) analyses and stay informed on all things fundamentally golden, please subscribe now on our website.