Even though the beginning of yesterday’s session was rather uneventful, its remaining hours proved much more informative and meaningful. In fact, based on how the developments unfolded, we decided to go long silver. This position is against the big downtrend, which continues to be the most likely outcome due to myriads of reasons outlined inthis week’s flagship Gold Trading Alert. Yet, just because gold, silver, and mining stocks are likely to fall very far in the following months, it doesn’t mean that there will be no periodic corrections and that some of them will be likely enough to provide good risk/reward situations that would justify going long. It seems that we have one of such situations right now.

We’ve been writing for a few days now that the short-term outlook for gold, silver, and mining stocks is now rather bullish, even though the medium-term outlook continues to be extremely bearish. We wrote, however, that the situation was not bullish enough to justify long positions. So, what happened that the outlook for silver became bullish enough to justify opening the long position in it? And why not in gold and mining stocks as well?

It's a matter of what happened during Tuesday’s session. And more precisely, how it happened. How silver performed relative to gold, and – most importantly – relative to mining stocks. And the way the latter showed strength. 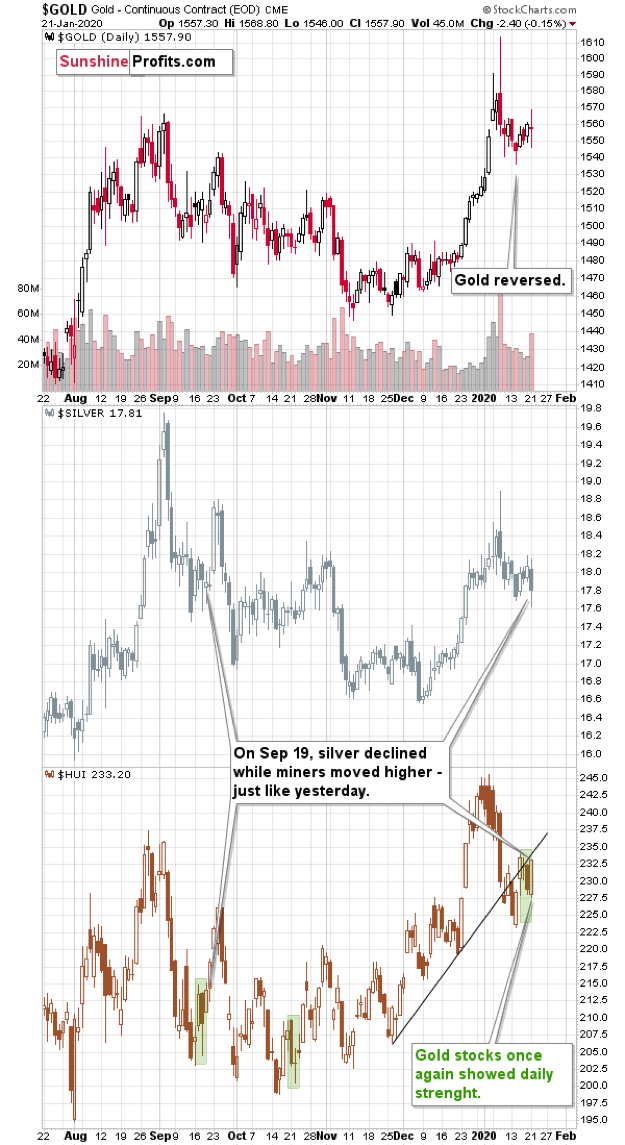 What may seem surprising is that it was silver’s weakness that actually increased its bullish potential.

People tend to view rallies as bullish and declines as bearish as if seeing something once made it more likely to happen on the next day too. But it isn’t so. If it were, it would be possible for everyone to make money by simply going long after a daily rally; and going short after a daily decline. And yet, people are not doing it. Why? Because it doesn’t generate returns on average, because this simple strategy doesn’t work. Why again? Because daily rallies are not bullish by themselves, just as daily declines are not bearish on their own.

In fact, the opposite might be true to some very limited extent. After all, a decline needs to take place before the bottom, and everyone knows that its best to buy at the bottom. It’s also best to sell something when it tops and to enter short positions at that time. And a rally must first take place for a top to form.

Most daily rallies and most daily declines, however, don’t result in tops or bottoms. They are followed by some other price action. Therefore in most cases, a daily rally or a daily decline doesn’t tell us anything about the way the price will move in the following days.

In case of news, we can detect anomalies and determine whether the market is reacting the way it should – if not, this might create a trading opportunity.

In case of the previous price moves, we can apply the classic technical analysis patterns, cyclical analysis and similar techniques.

The last case can provide sector-specific insights as some things might happen in a special way that doesn’t take place in general and thus it’s not covered by the classic technical rules (by the way, did you know that technical rules are justified from the fundamental point of view?). We saw this kind of signal yesterday.

Namely, mining stocks showed daily strength by soaring back to previous highs while gold did almost nothing in closing price terms, and silver actually declined. Overall, silver is close to its recent lows, while gold miners are close to their very recent highs. We’ve researched the relative performance of silver and mining stocks and to make long story short in case of this trading tip, miners tend to rally particularly strongly in the early part of a given rally, and silver tends to be relatively weak initially but soars in the final part of the rally.

Yesterday’s session, combined with the relative performance of silver and miners that we saw recently, perfectly fits the “early part of the rally” situation as outlined above. That’s exactly what miners and silver are supposed to do before the final part of the rally takes place.

There’s also a confirmation of the above present in the mining stocks themselves. In this case, it’s the second way the context plays an important role.

The green areas marked on the above chart show similar cases in mining stocks. Gold miners declined significantly at the beginning of the year, but they corrected with short-term strength. On Monday, we wrote that Friday's decline might have indicated that we just saw another short-term top, or it might have been a regular daily pause that we often see in the initial part of short-term upswings. Based on how miners rallied yesterday, it seems more likely that it was just a pause. Consequently, the situation is similar to what happened in mid-September 2019 and mid-October 2019.

The similarity to September 2019 is the key one, though. That was the corrective upswing after a big, sharp short-term decline and this is the kind of decline that we saw earlier this month. Silver’s performance is also quite similar. On September 19, 2019, gold miners rallied strongly after the daily slide, while silver was unable to close above the previous day’s closing price.

This means two things: that we were correct to close the short positions in the precious metals sector immediately after gold’s Jan 14 reversal, and that silver is likely to enter its “big catch up” stage shortly.

Miners might still rally more in percentage terms, but it might be more difficult to exit such position close to the top. Please note that in late September 2019, the top in miners was just a one-day phenomenon and miners declined immediately thereafter. In case of silver, there were actually two more intraday highs when one could have exited the long position and enter the short one.

So, while we are usually diversifying between gold, silver, and mining stocks in our trades, this time – based on how silver declined recently and how miners rallied – it seems justified to take advantage of the extra opportunity that silver’s relative performance provides.

Please note that we expect to keep this long position active only for several days.

Summing up, it seems that the final part of the corrective upswing in the precious metals market is still ahead of us. This means that silver is likely to rally particularly strong in the next several days. The risk to reward ratio in case of silver outperforms the risk to reward ratio in case of the rest of the precious metals sector similarly to how our long Stock Picks from the previous week outperformed the S&P (over 3 times). Consequently, at this time, we aim to profit on a quick long trade in silver, and it might be something you might want to consider as well.