The preliminary estimate of US GDP growth for the second quarter and the latest monetary policy meeting by the European Central Bank will be the most keenly awaited events of the next seven days. While there should be plenty of headlines from these two risk events, the remainder of the week is looking unusually quiet, with only Australian inflation, Eurozone flash CPIs and US durable goods standing out as notable releases.

Recent data out of Australia has been fairly solid, with the economy bouncing back nicely in 2018 after a weak patch in the latter half of 2017. However, this hasn’t been enough to halt the Australian dollar’s slide, which is down by nearly 6% versus the greenback so far this year. Next week’s inflation figures might also struggle to lift the aussie given the growing trade risks and widening yield differential with the US even if, as expected, the RBA hits its price target. CPI numbers due on Wednesday are forecast to show the quarterly CPI rate rising to 2.2% year-on-year in the second quarter from the prior 1.9%. This would make it the first time since the first quarter of 2017 that inflation would have fallen inside the RBA’s target band of 2-3%. Investors will also be watching the RBA’s alternative trimmed mean and weighted median gauges of inflation due the same day, as well as quarterly producer prices on Friday for evidence that the uptick is sustainable. 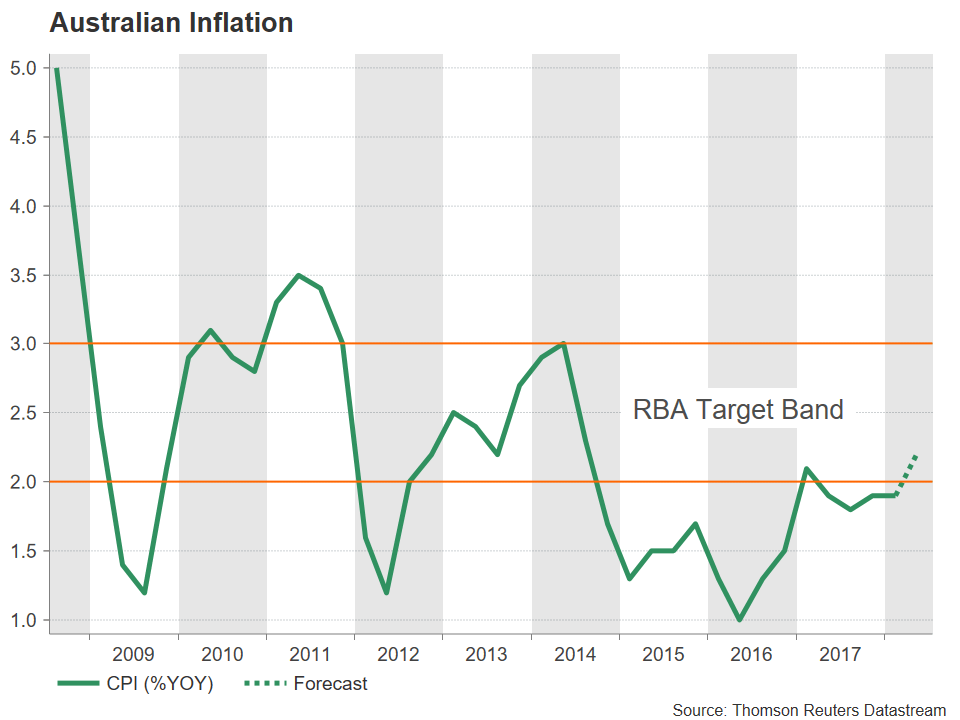 The aussie is not alone in feeling the heat from the elevated trade tensions and the bullish US dollar. Its New Zealand counterpart has also been under heavy selling pressure during the past few weeks. However, the kiwi might find some short-term respite if New Zealand trade figures on Tuesday point to strong exports in June.

The ECB surprised many at its June meeting by announcing the full details of the decision to end its asset purchases and when to expect the first rate increase. Traders will be looking for more clues on the Bank’s ambiguous timeline of a rate hike on Thursday. But before then, attention will be on the Eurozone’s flash PMI releases on Tuesday, as well as on the German Ifo survey on Wednesday.

After a modest rebound in the euro area’s services and composite PMIs in June, a slight easing in activity is forecast for July. As for the manufacturing sector, the downslide is expected to continue in July. The euro could extend this week’s declines if analysts are unable to find anything positive from IHS Markit’s PMI reports. Meanwhile, there’s not likely to be much to cheer about either from Germany’s Ifo business confidence gauges. The Ifo business climate index is expected to drop marginally to 101.5 in July to more than one-year lows, underlining the deteriorating outlook of German businesses as a result of the growing trade frictions. An EU trade mission will be holding talks with their US counterparts in Washington next week. German exporters might find something to celebrate about if the US accepts the EU’s compromise on tariffs and backs away from imposing higher levies on European car imports. 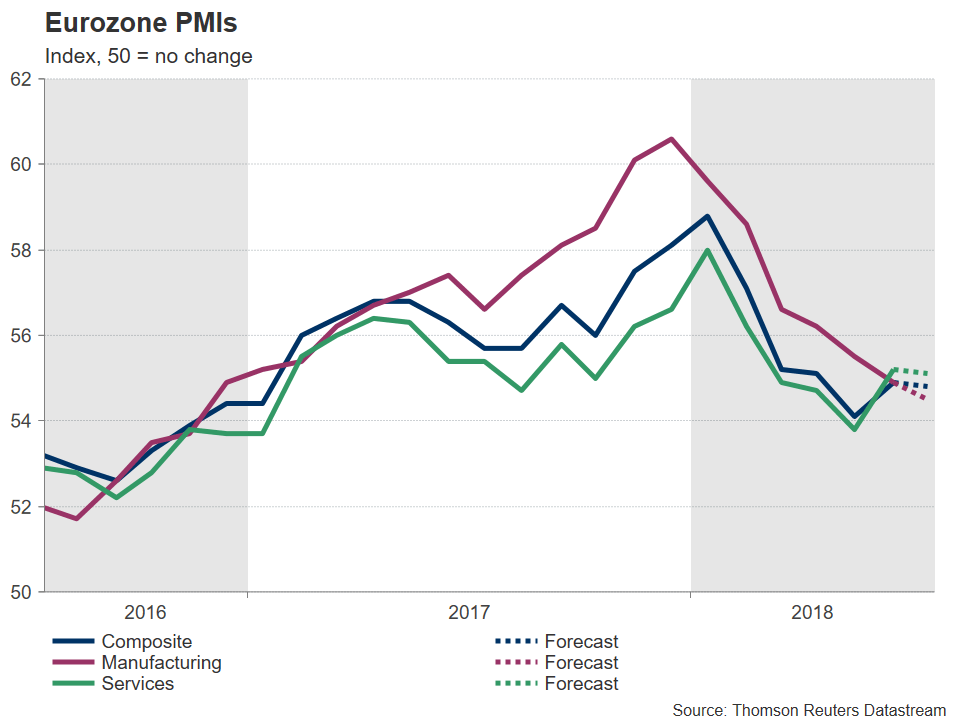 The clouded outlook for businesses is almost certain to keep the ECB on a cautious course even as the central bank readies to pull out of its bond buying program. Following last month’s landmark decision to call an end to four years of quantitative easing, investors will be hoping for more clarity on the ECB’s forward guidance to keep rates on hold “at least through the summer of 2019”, with some reports suggesting that Governing Council members had their own differing interpretations of what this meant. The unexpectedly dovish rate path forecast has been weighing on the euro ever since. But the single currency could benefit from any hint that a rate hike could come before the end of 2019, which is the current market pricing. As for the July meeting, no change in policy is anticipated by the ECB, with Mario Draghi expected to reiterate his recent message.

US GDP eyed for Q2 bounce

The first estimate of GDP growth in the June quarter will be the highlight of the US economic calendar, but there will be plenty of other US releases to keep traders busy next week. Housing data will be in focus on Monday (existing home sales) and Wednesday (new home sales) for signs of any weaknesses in the US housing market in June following this week’s surprisingly large drops in housing starts and building permits. On Tuesday, the flash PMI releases from IHS Markit are expected to show manufacturing and services activity holding near June’s levels in July, while on Wednesday, durable goods orders are set to rebound by 2.5% month-on-month in June from a 0.4% dip in the prior month. 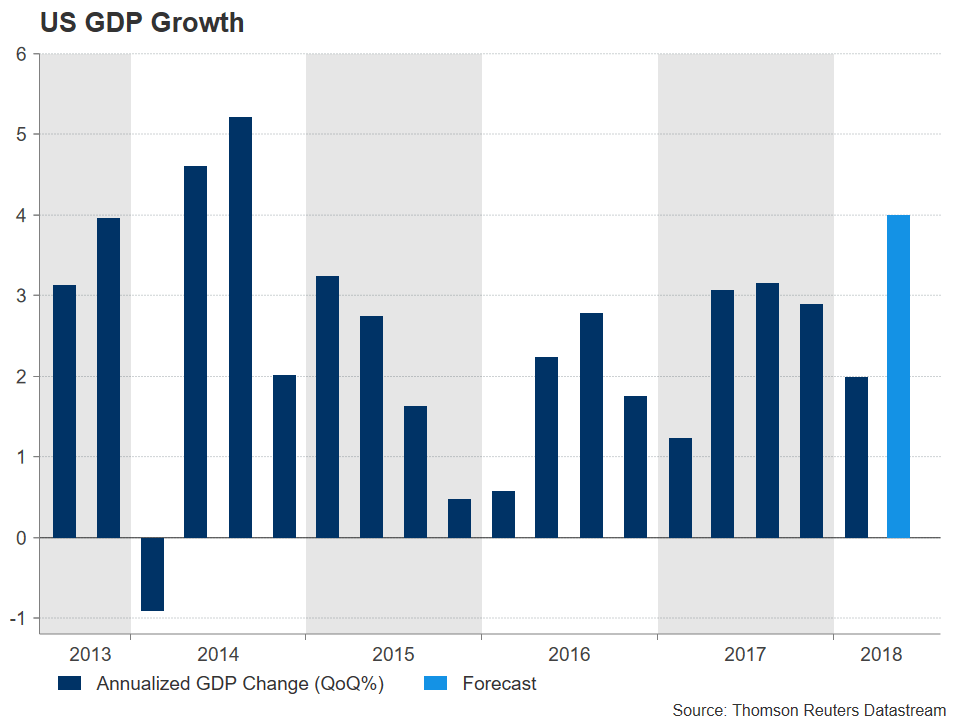 After the usual first quarter slowdown, the US economy is expected to roar back in the second quarter. Annualized growth is projected to jump from the prior 2.0% to 4.0% in the three months to June, which would make it the biggest expansion since the third quarter of 2014. The Trump administration’s tax cuts at the start of the year are thought to have stimulated consumer and business spending, putting the US at the top of the growth league table among advanced economies. Given the strong gains for the US dollar in the past two weeks, a large miss in the data would come as a shock for the markets and could lead to a sharp sell-off. Similarly, a much stronger-than-expected figure would raise questions about the Fed’s “gradual” rate hike policy.