It is a very quiet week in terms of events, as trading winds down for the holiday season. This implies that liquidity may be in short supply, setting the stage for some explosive moves if there is any breakthrough in the Brexit crusade or the US stimulus saga. Overall, markets are set to end a crazy year on an incredibly optimistic note, with a little help from central banks showering investors with cheap money. The ‘party’ could continue into next year as the reflation trade is likely to dominate.

Cheerful end to a wild year

What a year it has been. Most countries entered lockdowns, the retail sector was decimated, international borders were shut, America saw large-scale riots, and crude oil prices turned negative. But perhaps it wasn’t all bad, as the crisis also forced some positive regime changes. Monetary and fiscal policy joined forces after a long time, the EU took a giant step towards a fiscal union, and medical science quickly gave us vaccines to put this nightmare behind us.

In the markets, the dominant force was stimulus. Stocks staged one of the most powerful comebacks ever, the dollar was ravaged as the Fed was more aggressive than other central banks and safe-haven demand vanished, while commodity prices went through the roof once the recovery narrative took hold. It’s surreal, but apparently even a deadly pandemic is no match for lavish government spending and ultra-low interest rates.

Looking into early 2021, this party looks set to continue. The ‘reflation trade’ is likely to dominate as the global economy heals its wounds, central banks keep their foot on the gas, and governments continue to spend like drunken sailors. This implies a favorable backdrop for equities, commodities, and other risk-linked assets. 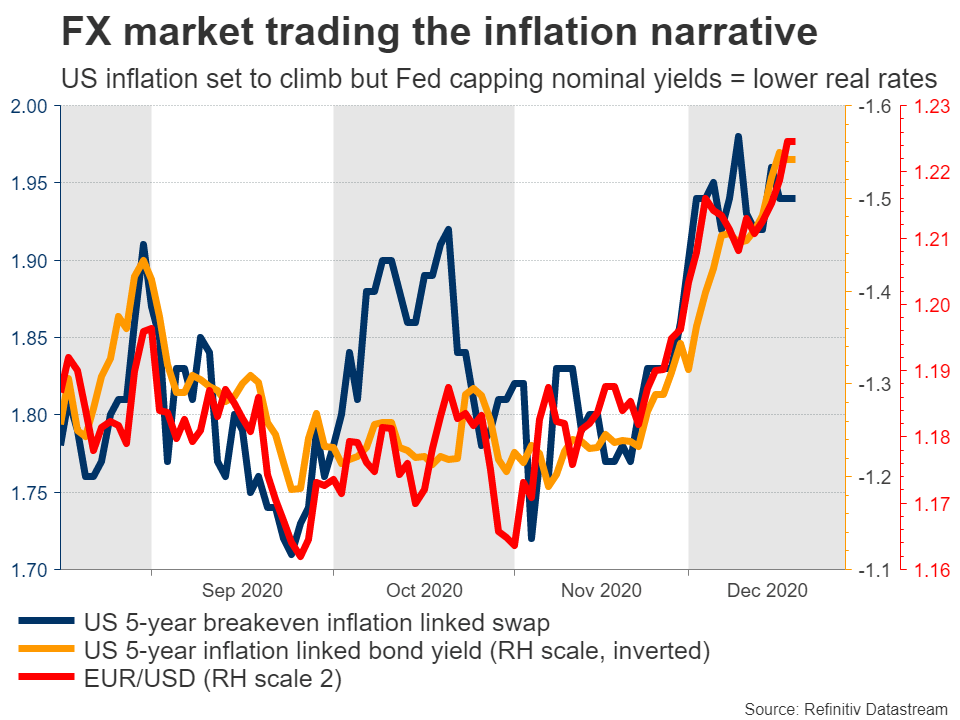 In the FX arena, the overwhelming consensus is for a weaker dollar. US inflation is expected to accelerate faster than other nations amid a combination of powerful stimulus, soaring industrial commodity prices, reverse-globalization, and suppressed demand waiting to be unleashed. With inflation accelerating but the Fed keeping nominal bond yields capped, real interest rates (nominal minus inflation) are expected to stay deeply negative, devastating the dollar and boosting commodity-linked currencies.

The catch is that much of this has already played out. We have seen gigantic moves as investors frontloaded the recovery narrative, and several trades like short-dollar are becoming quite crowded. It all hangs on the assumption that things will return to normal quickly, but markets seem to be underestimating the uncertainties. There’s still a major risk of a wave of small business bankruptcies or a surge in unemployment as government support is withdrawn, or even an eviction crisis in America as the moratoriums expire, to name a few. 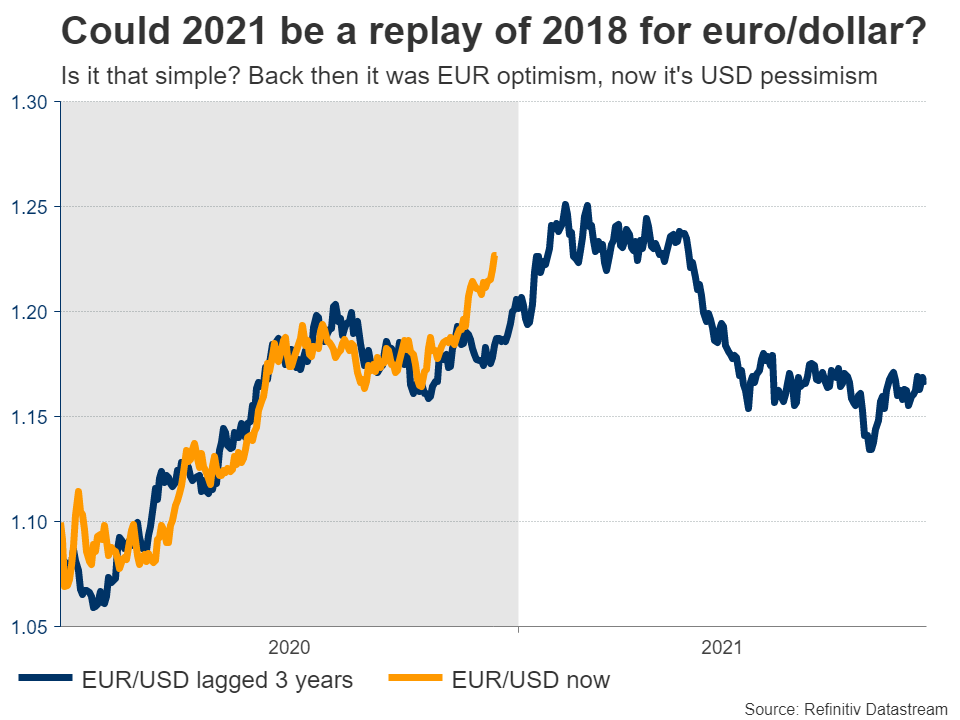 The bottom line is that while euro/dollar could continue to race higher for now amid all this euphoria, it may have trouble breaking significantly above $1.25, as any risk-off episode could spark a major short-squeeze in the dollar and the ECB is likely to go to battle to defend that level. Plus, the euro area is still in deep trouble economically, while the US is doing much better, which may dawn on investors at some point. Could it be 2018 all over again?

A Brexit deal for Christmas?

In an otherwise quiet week, the Brexit adventure will remain front and center. Negotiators are making a final attempt to reach a trade deal, and there has been some progress lately. The EU dropped its demand that it should have the right to unilaterally impose tariffs if the UK fails to keep up with its standards going forward, with both sides agreeing to set up an ‘independent arbitration system’ to resolve any disputes.

The outstanding issues now are what this ‘system’ will look like, and fisheries. It is a close call as the clock has almost run out, but a last-minute deal still seems like the most likely finale. Both sides desperately want to avoid the economic shock of a no-deal, and Boris Johnson is famous for taking negotiations to their absolute breaking point before conceding. It is difficult to imagine a deal falling apart because of fisheries, of all things. 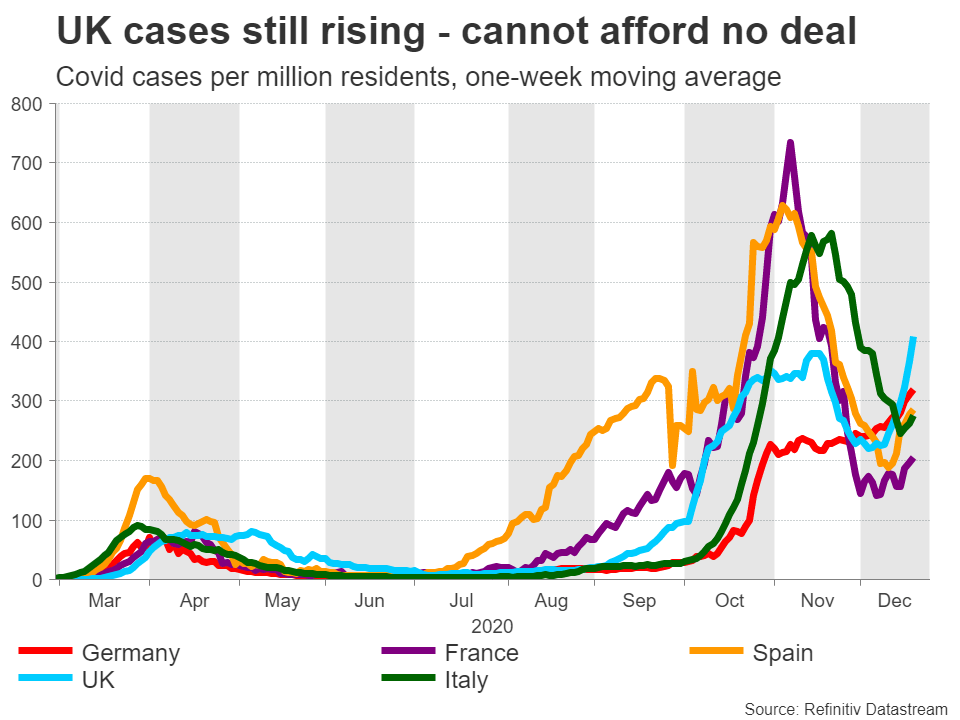 As for sterling, the ultimate destination may be higher. Even though a lot of optimism has been baked in already, there is still a high degree of uncertainty about the outcome, which suggests the pound may have some miles left in the tank once an agreement is finalized. This may be especially true if a deal hits in the coming week(s) when liquidity will be thin, amplifying any moves.

US Congressional deal imminent as well?

The other deal that is being brewed is in Washington D.C., where both Republicans and Democrats suggest that a new relief package is ‘very close’. The price tag is rumored at $900bn, which would include new cheques for all Americans and higher unemployment benefits to shield the economy until the vaccines are fully deployed.

While a deal does appear imminent, the risk here is that the good news is already priced in. The stock market has rallied time and again on rumors that a deal is close. Equally, the dollar keeps sinking every time there’s a new headline on this.

It is impossible to say whether this is fully priced in, but what seems clear is that most of it is, suggesting that any positive stock market/negative dollar reaction on a confirmation may be limited, or even the trigger for some profit-taking in these trends. 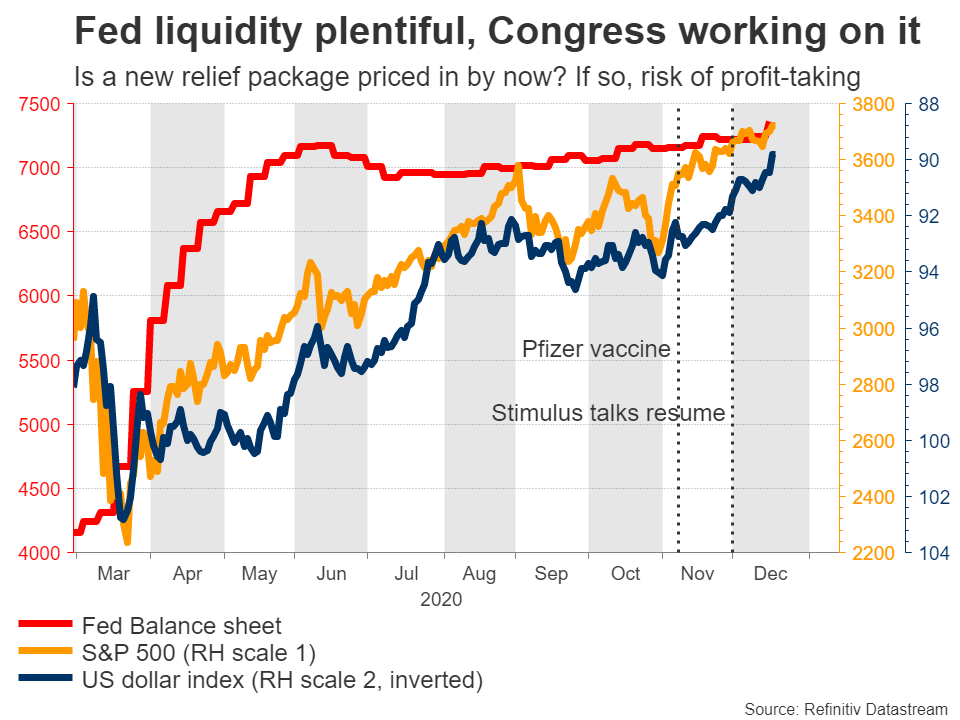 On the data front, there’s a barrage of releases on Wednesday, including durable goods orders, new home sales, personal consumption and income numbers, and the core PCE price index – all for November. Durable goods and the core PCE index are the most important, yet even those pass unnoticed nowadays.

Staying in the data domain, Canada’s monthly GDP print for October will be released on Thursday, ahead of a data deluge from Japan on Friday that includes jobs numbers and retail sales for November.

Similarly though, these are unlikely to matter much for either the loonie or the yen. The fate of both currencies hangs on how risk appetite evolves, as the loonie is linked to commodity prices and stock markets while the yen is a safe haven.

Final GDP estimates for Q3 from both the UK and the US are also due on Tuesday, but both are very old news.