As markets enjoy a bit of bounce back from the panic selling triggered by the outbreak of the deadly coronavirus, traders may struggle to keep the momentum going over the next seven days as things quieten down a little on the data front. Industrial production numbers out of the Eurozone, the United States and the United Kingdom will be the main release, though the focus will be on fourth quarter GDP estimates for the UK and on the latest retail sales figures in the US. The Reserve Bank of New Zealand will be the only central bank to hold a policy meeting but is unlikely to excite as it will probably keep rates on hold.

One eye on spread of coronavirus

China’s central bank may have managed to stabilize the markets by injecting billions of dollars into the financial system, but investors will still be keeping a close watch on how successful authorities are in curbing the spread of the coronavirus. The longer it takes to bring the situation under control, the longer many businesses will remain shut, hence the bigger the disruption to the domestic economy and to global supply chains. Although the government has pledged to provide more support to help the sectors most hit by the endemic, the relief rally may dwindle once a clearer picture starts to emerge of the full damage of the virus on the economy.

With the virus outbreak attracting all the attention, Chinese consumer and producer price data for January due on Monday are unlikely to draw much interest.

With a pickup in both GDP growth and inflation at the end of 2019, the RBNZ has little reason to ease policy over the next few months, having cut the official cash rate by 75 basis points in the past year. However, given new headwinds such as the coronavirus and Australian bushfires that are likely to slow growth in China and Australia – both close trading partners of New Zealand – the RBNZ may adopt a more cautious tone. 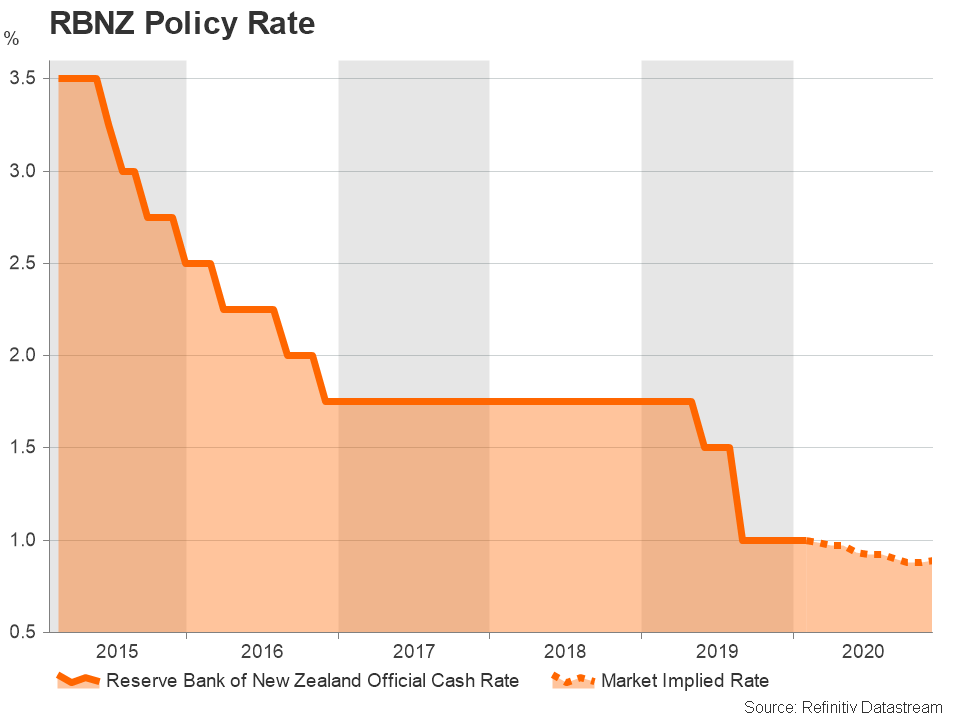 Should investors detect a tinge more dovish language than anticipated in the central bank’s announcement and quarterly Monetary Policy Statement on Wednesday, the New Zealand dollar could come under the firing line. The kiwi steadied somewhat this week having been on the slide since the start of the year, but its inability to rebound along with risk assets suggests traders don’t think the RBNZ is done cutting rates just yet.

Euro unable to catch a break

Recent data out of the Eurozone has been mostly positive and point to a soft rebound in economic activity at the turn of the year. However, the euro hasn’t been able to capitalize on the improving economic picture and is stuck near four-month lows versus the dollar. Next week’s releases will probably provide a further indication that the worse may be over the region, though this may not be enough to put a floor under the single currency.

The Eurozone sentix index for February will kick-off the week on Monday, followed by December industrial production figures on Wednesday. On Friday, the second estimate of fourth quarter GDP growth is due, along with quarterly employment numbers. No revision is expected to the flash GDP reading of 0.1% quarterly growth.

Tuesday will be a busy day for UK indicators with a flurry of releases that will include the first estimate of GDP growth in the final three months of 2019, as well as industrial output and trade figures for December. With growth recovering strongly in January following the decisive election outcome in December, the reports may be viewed as out-of-date and therefore not stir much of a response in the pound. The Bank of England has already put more weight on the latest PMIs, which jumped sharply in January, dissuading policymakers from cutting interest rates at their policy meeting last week. 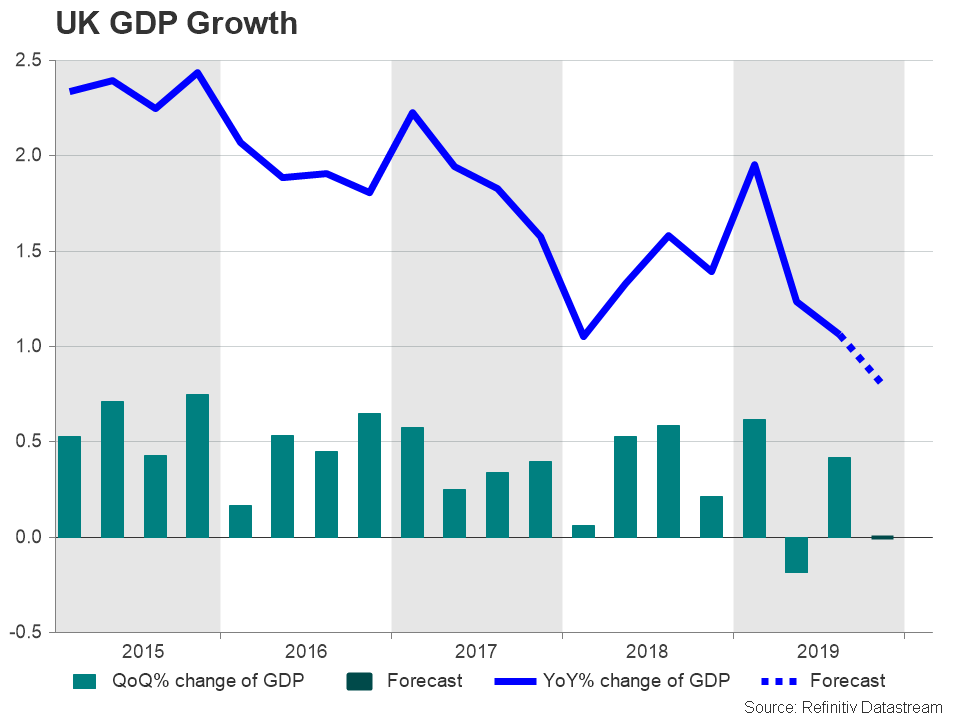 Still, the data should reveal the full scale of the economic paralysis brought on by the political turmoil in the run up to the December 12 vote, as well as any signs of a late turnaround in output. Worse-than-expected numbers could slightly push up the odds of a BoE rate cut in the coming months, though much of the focus for the UK economy will now be on hard data for January.

There’s been no shortage of upbeat data coming out of the US lately, with both the ISM manufacturing and non-manufacturing PMIs beating forecasts and Wall Street continuing its ascent into record territory. Next week’s reports are not expected to spoil this rosy backdrop, ensuring that the US dollar remains king of the FX market.

First up are the JOLTS job openings on Tuesday, and the consumer price index (CPI) will follow on Thursday. CPI inflation has been diverging from PCE inflation – the Fed’s preferred inflation metric – in recent months and the headline rate is forecast to have edged up further in January to 2.4% year-on-year. However, the core rate is expected to have moderated slightly to 2.2% y/y. While a positive surprise wouldn’t necessarily mean policymakers would turn more wary about a build-up in inflationary pressures, it would nevertheless underline the relative robustness of the US economy compared to its peers and maintain upside pressure on the greenback.

Even more important will be the January retail sales figures on Friday, which are seen as a reliable barometer of consumer spending. Retail sales are forecast to have increased by 0.3% month-on-month in January – the same pace as in the prior month. A miss in the retail sales numbers would pose a major downside risk for the dollar given the recent strong gains as it would raise concerns about the health of the US consumer amid a weak global economic environment. 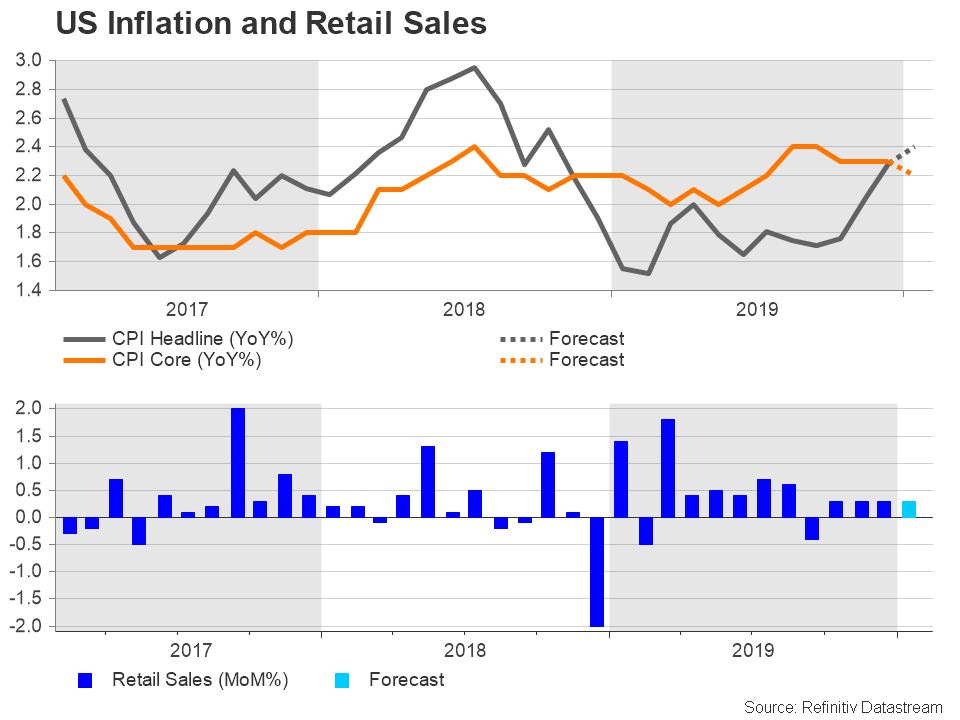 Other data to watch on Friday are industrial production for January and the University of Michigan’s preliminary consumer sentiment reading for February.

Apart from the data, an appearance by Federal Reserve chief Jerome Powell in Congress may act as another focal point for the dollar. Powell is tentatively scheduled to testify in his semi-annual congressional hearing on Tuesday and Wednesday and investors will be curious to see how he balances his outlook with rising risks from the coronavirus to consider on the one hand and a pickup in domestic growth on the other.

USD/JPY bounces in tandem with US dollar, tests 109 ahead of FOMC minutes

USD/JPY has picked up fresh bids and jumped back to test the 109 handle amid a broad-based US dollar rebound, in light of the renewed worries over the coronavirus spread. Focus shifts to FOMC minutes.

AUD/USD under pressure below 0.6150 on Australia's outlook downgrade

AUD/USD remains pressured below 0.6150 after S&P cut Australian credit outlook to negative. The shift in risk-tone adds burden onto the Aussie pair. The pandemic headlines and FOMC minutes will be important.

Coronavirus Exit Strategy: Three critical factors to watch and how they impact currencies

When can we get out of the house? That is the question on the minds of around half the world's population that is shut down at home. The broad lockdowns have also kept millions out of work and triggered a mass cancelation of activities, causing substantial economic damage.