An eventful week for equity markets, as financial markets thrived with multiple narratives. We started the week in the shadow of Dogecoin as Elon failed to deliver on Saturday Night Live. Mr. Musk then further went after the big daddy itself, Bitcoin, saying Tesla was suspending all use as a form of payment. Elon Musk stated it was because of the ESG (Environmental, Social and Governance) issues as it takes a lot of energy to mine Bitcoin. An odd one given this is a well-known fact and was known at the time Tesla decided to begin accepting Bitcoin.

Investors are more cognisant of ESG concerns now so Tesla may have come under pressure in that regard. Bitcoin was further in trouble as it was reported that the ransomware or hack attack on the Colonial pipeline, resulted in a $5 million ransom payment where the hackers demanded payment in Bitcoin. This has always been one of the main criticisms of Bitcoin, that it is unregulated and used for illicit and illegal transactions. Bitcoin suffered as this brings upon expected increased regulatory attention may now be brought to bear.

This may actually have a silver lining as it may legitimize and regularize Bitcoin. The problem still remains that all governments need and demand control of their currency. Bitcoin is unlikely to usurp the dollar any time soon. More likely it will become a more mainstream regulated asset. This has positives and negatives. The negatives in terms of price are regulation may involve insider position disclosure and a lack of the many pump schemes. A good thing for investors but not for some bubble assets.

Equities started the week negatively, perhaps anticipating the Consumer Price Index, and the number duly lit the touchpaper for some further action. The Nasdaq shed over 2.5% on Monday and repeated the feat on Wednesday post the CPI release. All Equity markets immediately went south on the number and remained under pressure. Bears finally awoke from their slumber and started to get excited but they were swiftly sent back into hibernation by Thursday and Friday’s price action. Strong inflows (see below) and some strong support areas in the Big Tech names in particular (See FAANGTastic technical analysis) helped equites turn the tide and rally to end the week.

The bond market tried its best to hurt equities as the 10-year Treasury yield reached 1.7%. However, it was the German Bund that stole the show, nearly going to a positive yield for the first time in two years. The move struggled for momentum and Friday’s weak retail sales number put yields back into the safe zone for equities, for now.

Bitcoin and crypto outflows early in the week made their way into equities by Thursday and in particular the meme names. AMC scooped the prize for most impressive as it smashed triangle resistance and signed for a near 30% rally on Thursday alone. AMC is up 4% on Friday at the time of writing and gunning for the key $14.54 resistance.

Despite the increasing nervousness over equity valuations, “buy the dip” and “don’t fight the Fed” seemed to resonate strongly with investors as the latest Refinitiv Lipper Alpha flow data shows. Up to $9 billion was pumped into equity funds to the end of May 12 from a week earlier. This is the fourteenth consecutive week of inflows. iShares Nasdaq ETF (QQQ), the Q’s as they are known, took in $1.9 billion for the first inflows in a month, which we had posted in last week's jobs report,

“Expect the Nasdaq (Nasdaq, QQQ) to see some inflows next week after Friday's jobs report as it was one of the few ETFs to see outflows”.

Growth and Value large-cap ETF’s both reaped over $4 billion in inflows.

The widely followed ARKK fund continued to suffer as price broke the 200-day moving average and followed this up by breaking key support at $106.25. ARKK price has now dropped nearly 40% from its 2021 high. 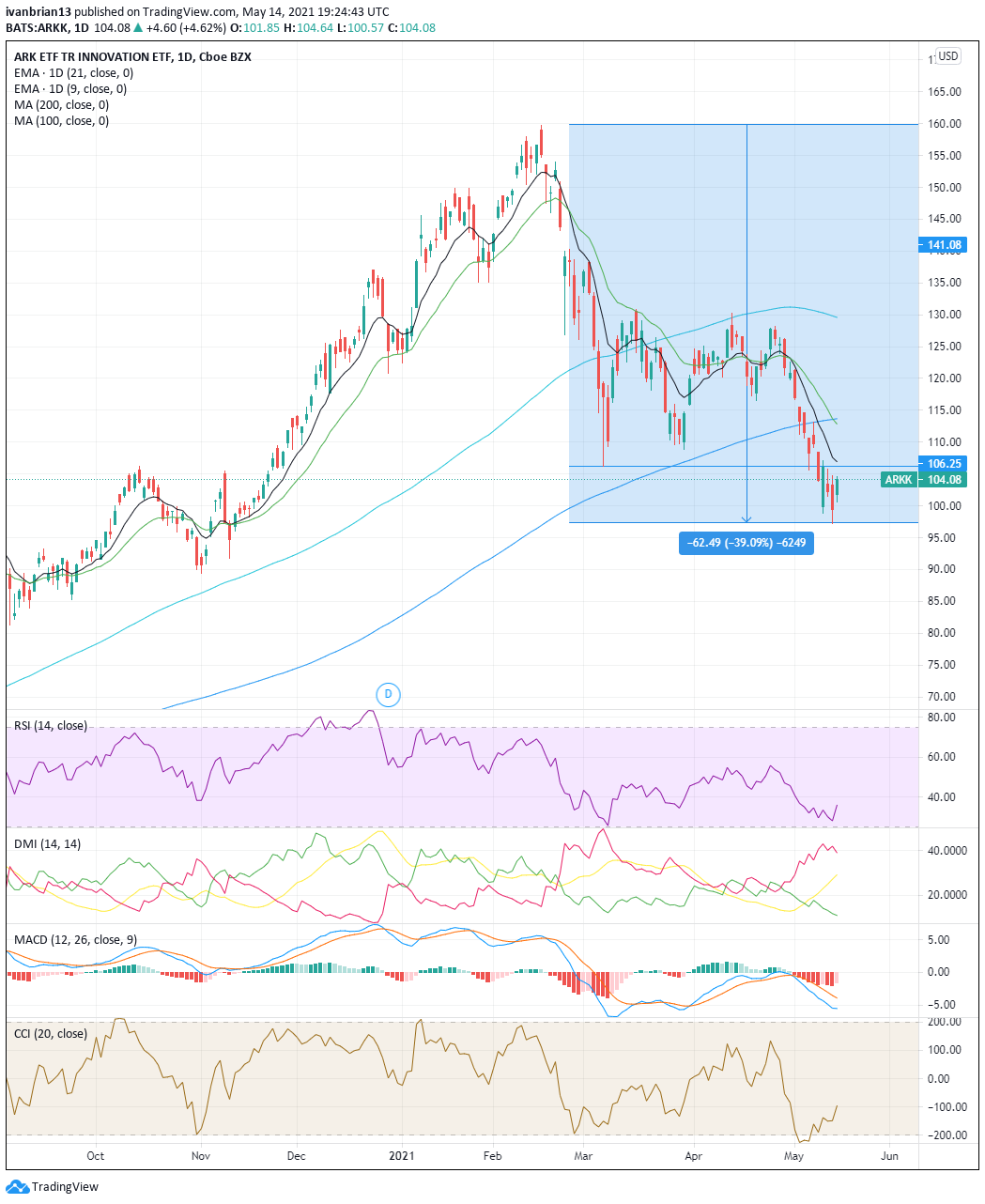 The S&P 500 staged a strong recovery and is poised to return into a bullish formation if it can close above the 9 and 21-day moving averages. Resistance at 4,124 was quickly recaptured on Friday as the disappointing retail sales number reenergized the argument for further stimulus and zero rates that had been brought into question by the strong CPI and PPI. The worst-case scenario of slowing growth and inflation has not been countenanced as of yet. Clearly buy the dip and “don’t fight the Fed" still are the go-to trades.

On the daily chart, S&P 500 price is on a strong bounce out of the 4,050-4,100 price range with the hopes of remaining bullish. The potential downside remains a factor and we can observe the following support level at 4,124 as a first test. The highlighted area below 4,000 in our S&P 500 chart is a strong support area and would be the next target following a breakdown below the 100 and 200-day moving averages (MA). 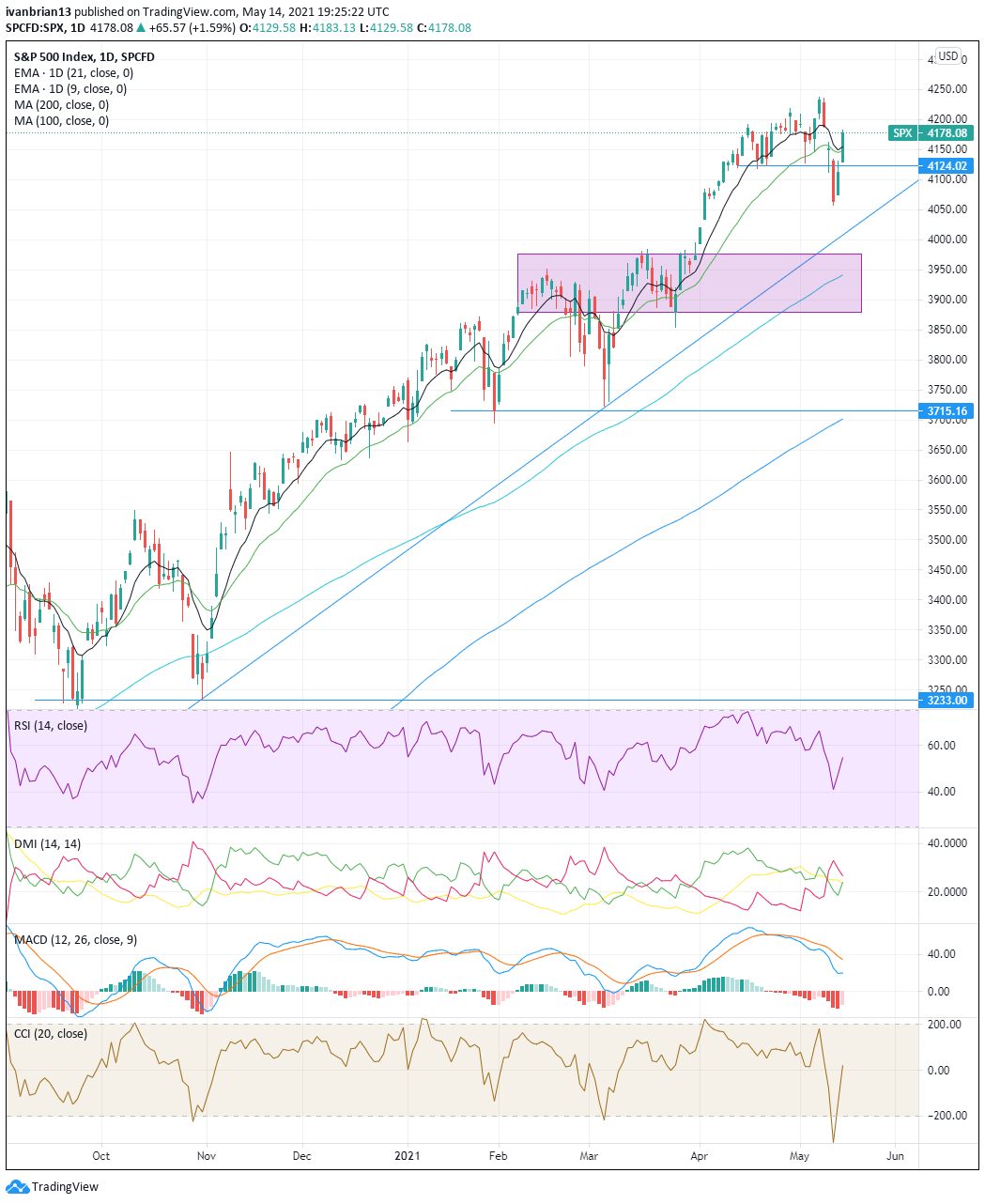 The Nasdaq gave us a much nicer viewpoint, trading neatly down to the support area and close to the trendline support at 12,910. Friday is a textbook retracement back to the 9-day moving average resistance at 13,396. Break that level and not much stands in the way of a test of new highs. 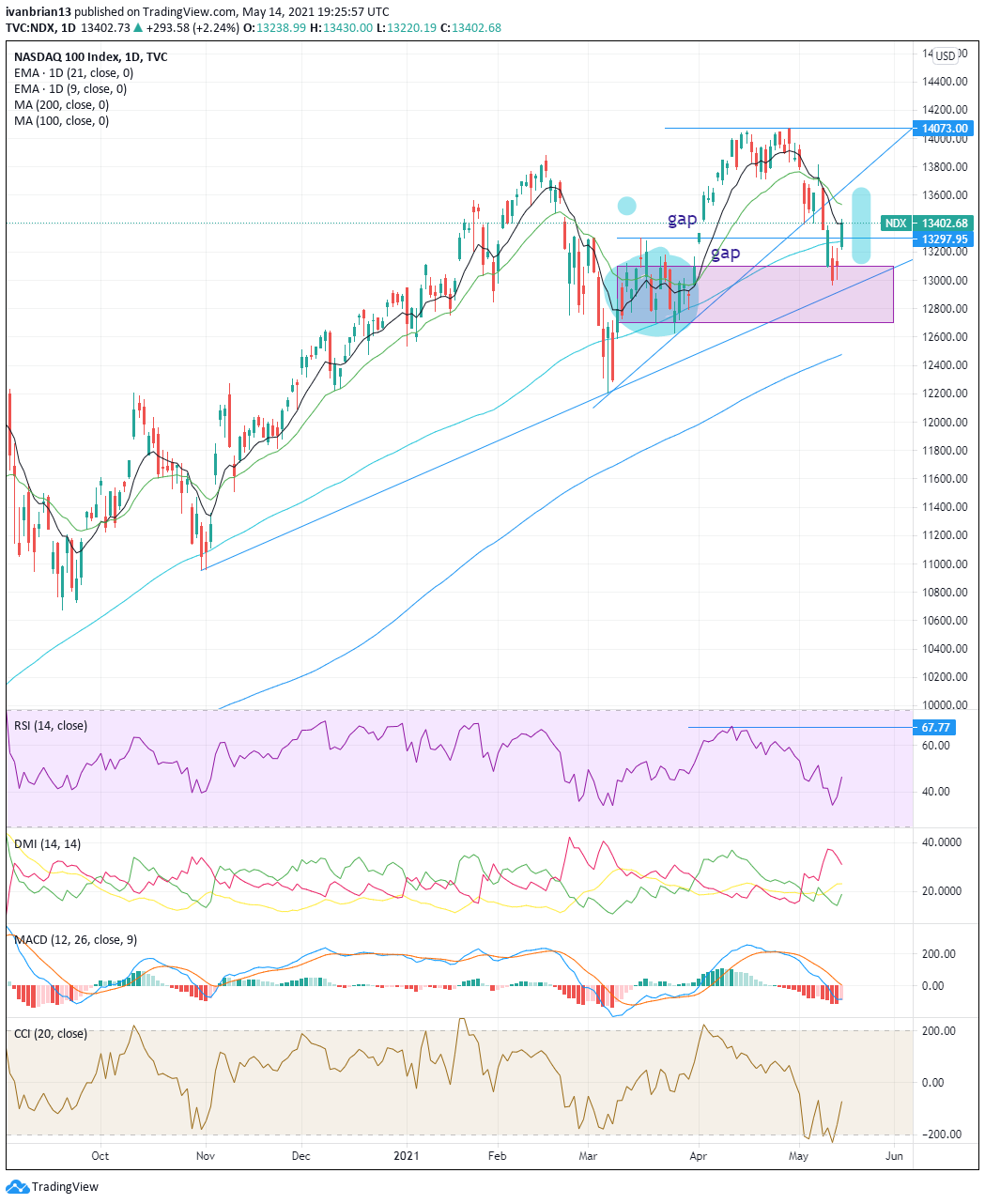 Earnings season is pretty much done and dusted and it was another knockout one for earnings growth. 457 of the 500 companies from the S&P 500 have reported and 87% of them have beaten estimates. 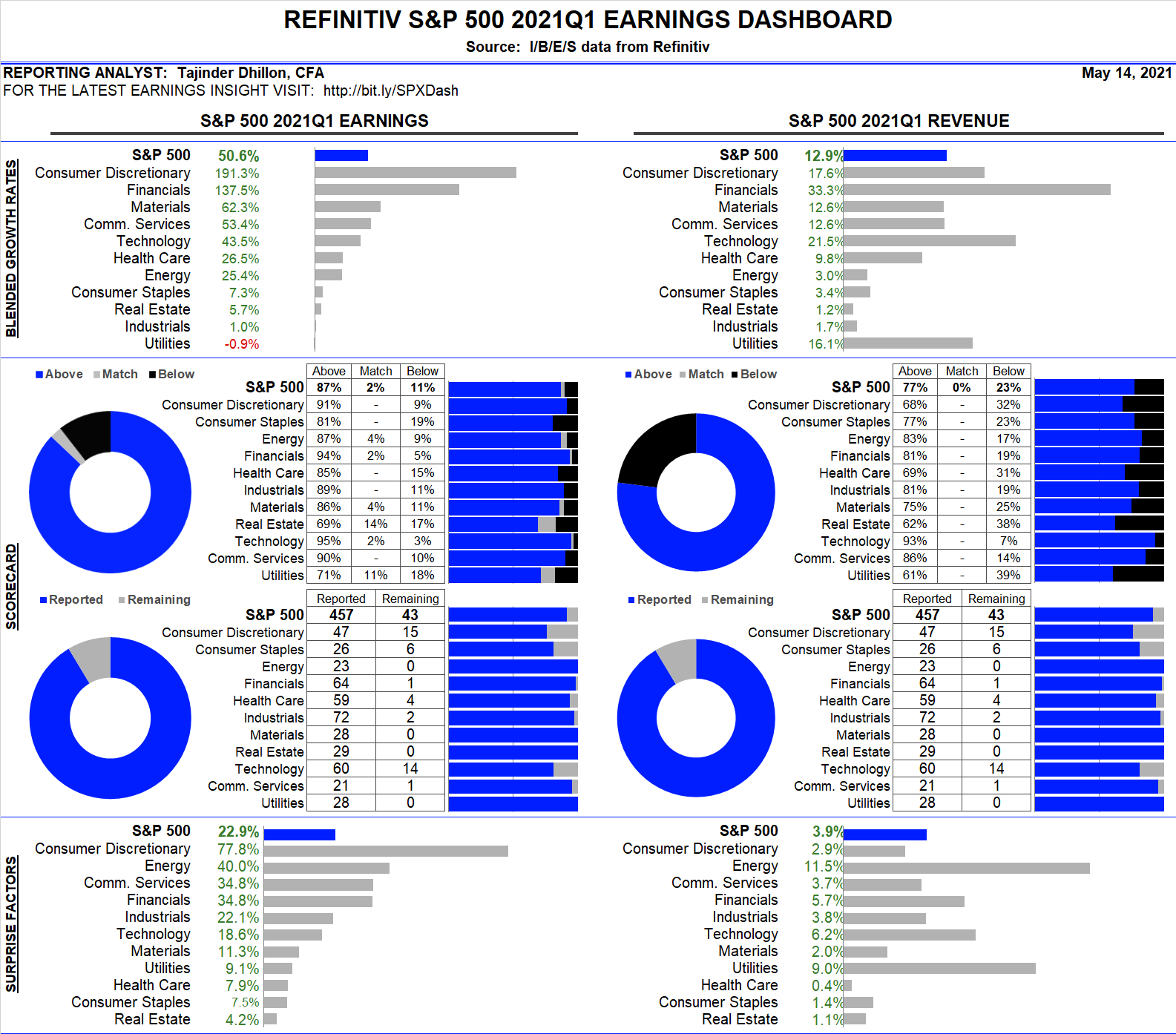 Some laggards report next week among them Home Depot, Walmart and Cisco.

Economic data is pretty light as well with Monday and Tuesday seeing little of note.

Wednesday has a 20-year bond auction which may pique some interest.

Thursday has the usual jobless claims. 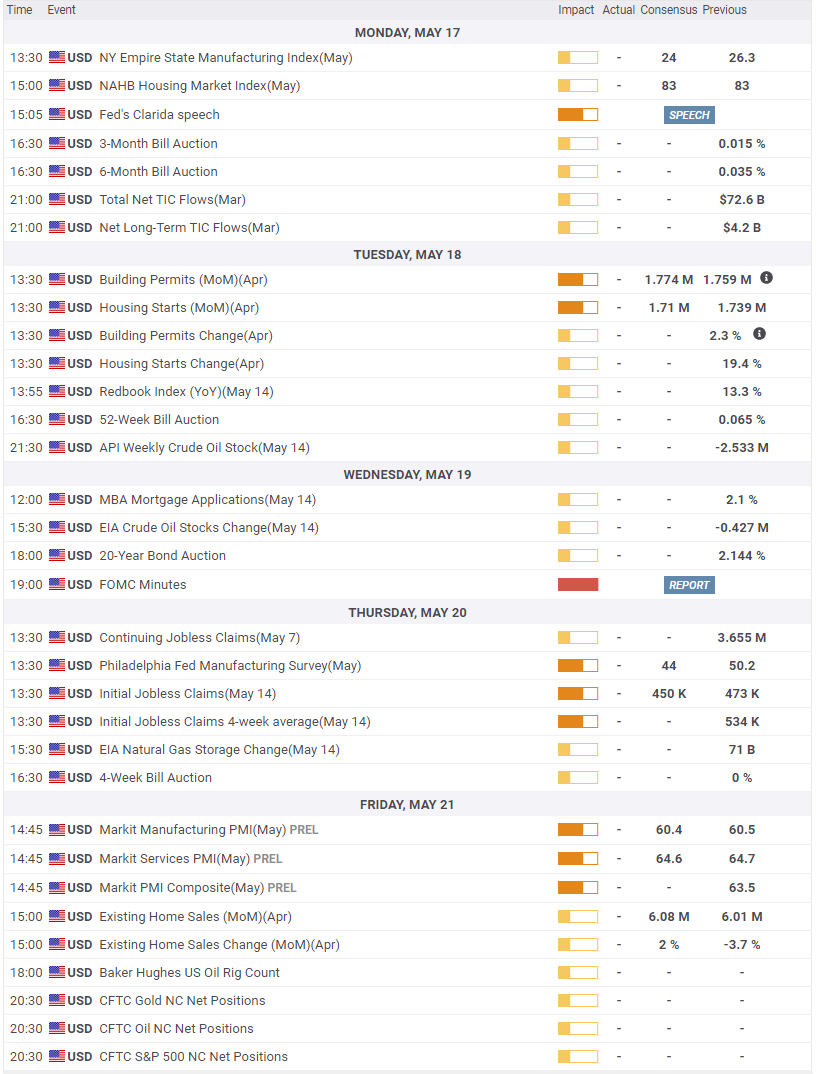 That’s all folks! If you have made it this far, thank you for reading and enjoy the weekend.