The first of the new year’s central bank meetings will get under way next week and it will be a heavy schedule on the data front as well. The European Central Bank, Bank of Japan and Bank of Canada will almost certainly be debating the latest setback to the recovery from the worsening Covid-19 outbreak. China will report its fourth quarter GDP print and flash PMIs along with inflation and retail sales numbers will be doing the rounds in most markets. However, investors will once again be gripped by the happenings on Capitol Hill in Washington amid fears of more violent scenes at Joe Biden’s inauguration and a possible vote in the Senate on Trump’s impeachment.

A surprise cut by the Bank of Canada?

Like many other countries, Canada has found itself under lockdown again as the second virus wave has more than surpassed the first peak, with deaths also surging in recent weeks. The sudden deterioration in the virus situation is already having a visible impact on the economy, leaving Bank of Canada policymakers in the lurch who only in October had decided to scale back their asset purchases by C$1 billion a week.

Increasing bond purchases is the most obvious option for the BoC to counter the downturn when it meets to set monetary policy on Wednesday. However, there’s been some speculation in recent days that the Bank may opt to cut its policy rate closer to zero, having previously signalled that 0.25% is the lower effective bound. Yet, despite the rumours triggering some selling in the Canadian dollar, interest rate futures are implying only about a 7.5% chance for a rate cut this week. That suggests there’s plenty of scope for the loonie to suffer more significant losses should the BoC deliver a shock cut or signal one. 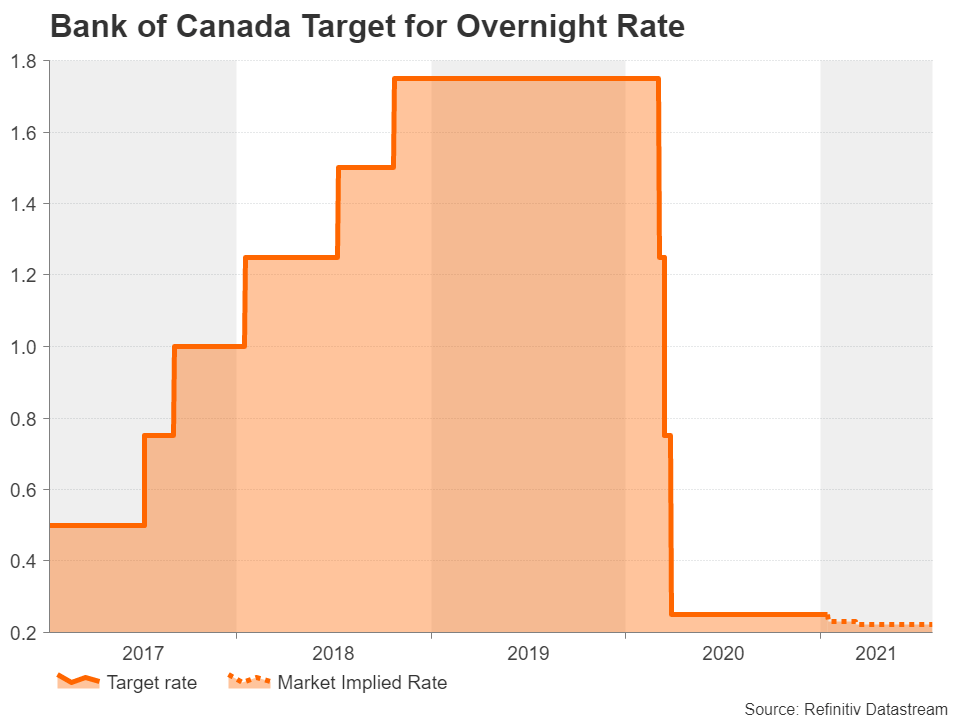 With the BoC meeting garnering all the attention, Wednesday’s inflation data and Friday’s retail sales figures will probably struggle to attract much interest.

BoJ upbeat despite state of emergency being expanded

The Bank of Japan sounded a cautiously upbeat tone in its latest assessment of Japan’s economic regions, signalling a possible upgrade in growth forecasts when it publishes its quarterly outlook report on Thursday, which will accompany its policy decision. The brighter outlook comes amidst an escalating outbreak in Japan, which has forced the government to extend the state of emergency to more prefectures.

But assuming that the vaccine rollouts proceed as planned, the only factor at this point that’s likely to force the BoJ’s hand to ease policy further is the weaker dollar. The blue sweep in the American Congress couldn’t have come at a better time for BoJ policymakers as it has boosted the US dollar just as it breached the 103-yen level for the first time since the March turmoil. If the dollar is able to sustain its rebound, there will be little incentive for the Bank of Japan to consider additional easing. 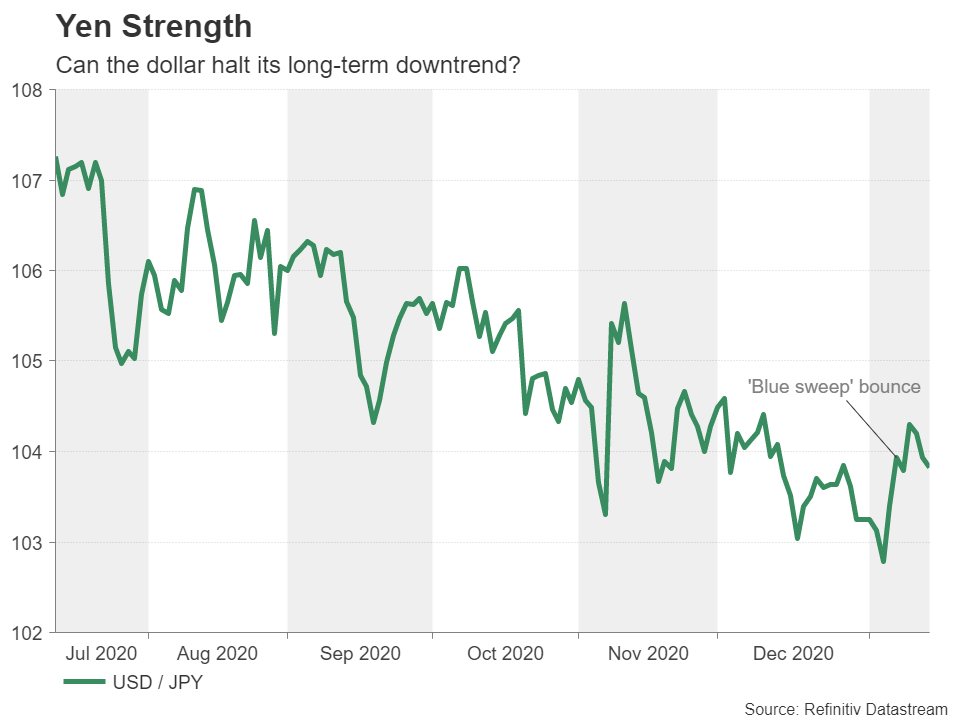 In the meantime, expect more uninspiring data to be released out of the country. Trade figures for December are due on Thursday, followed by the flash manufacturing PMI for January and December CPI on Friday.

This time last year an unknown virus was causing havoc in China as it quickly emerged that the city of Wuhan was fast becoming the epicentre of what has now become a global pandemic. But a swift and forceful response soon brought the outbreak under control and given that manufacturers have been less severely crippled by lockdowns, China’s industrial-based economy has rebounded more strongly than its competitors. The fourth quarter GDP estimate is out on Monday and is expected to show the Chinese economy expanded by 6.1% on a yearly basis during the period to reach pre-pandemic growth levels. Industrial production and retail sales readings for December are also due the same day and these may stir a bigger response than the GDP report if they point to the global slowdown weighing on domestic growth. 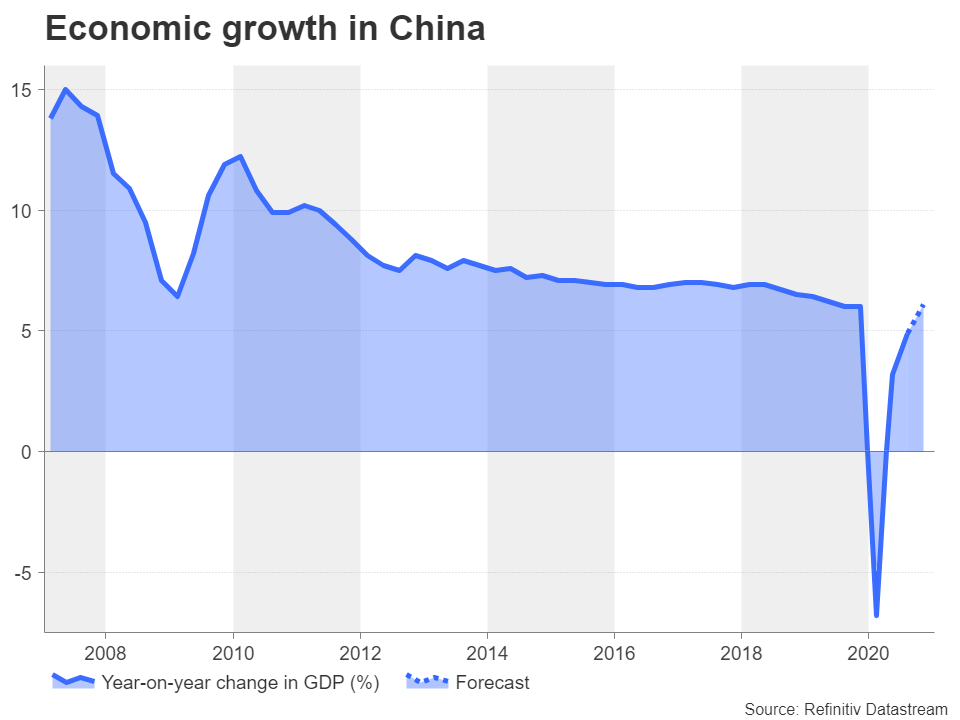 ECB to stand pat, with one eye on the euro

After an incredible rise of about 9% versus the dollar in 2020, the euro rally appears to be plateauing. Although a comeback bid by the greenback is the biggest cause for the pullback, a number of trouble spots are starting to surface in 2021 that could make this correction more permanent. The first concern is the slow roll out of vaccines in the EU, which could delay the lifting of lockdown rules that many member states have imposed. The euro area is predicted to have entered a double-dip recession, and just as the €750 billion recovery fund has started to be distributed there are doubts as to whether this will be enough.

Another headache for policymakers is the growing prospect of a new political crisis in Italy as the ruling coalition there is on the brink of collapse. Yields on Italian government bonds have spiked on the back of the crisis, widening the spread with German Bunds, and this has started to be a drag on the euro. However, the somewhat softer euro might take some of the pressure off President Christine Lagarde to talk down the currency when she briefs reporters on Thursday after the policy meeting. 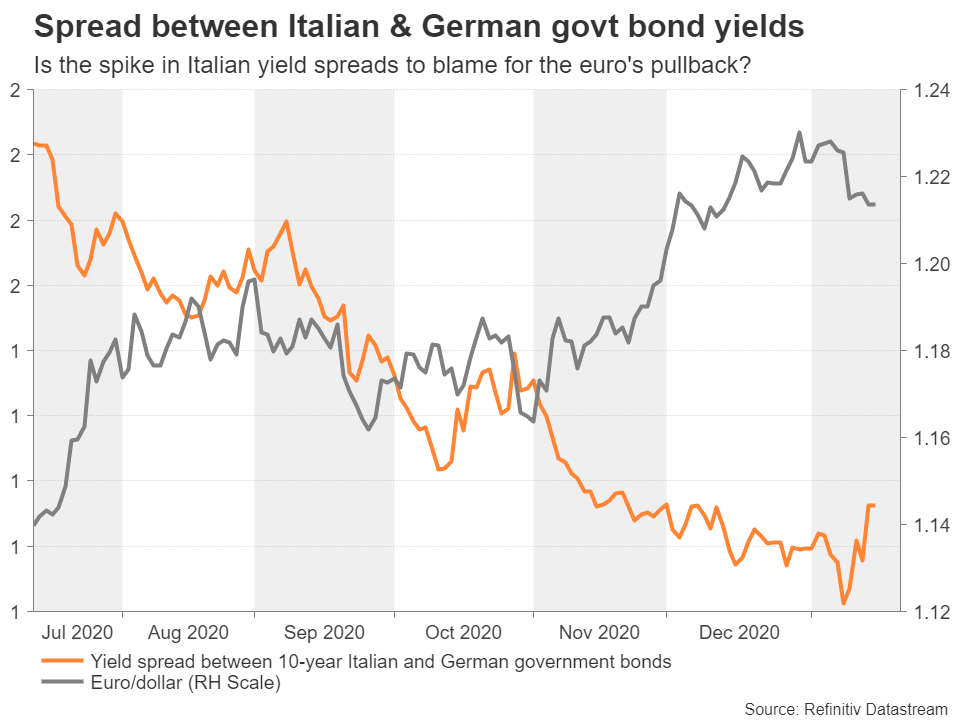 No new action is anticipated on Thursday after the Bank beefed up its pandemic emergency asset purchases by €500 billion in December. But the bleak short-term economic picture, the euro’s appreciation and the risk of more volatility in bond markets pose a growing challenge for the ECB and Lagarde will need to tread carefully with her remarks.

In terms of data, Friday’s flash PMIs for January will be scanned for clues as to how badly the latest round of restrictions are hurting the Eurozone economy. Ahead of that, Germany’s ZEW economic sentiment might draw some attention on Tuesday.

There’s not a lot on the US economic agenda next week that could set off any fireworks. The Philly Fed manufacturing gauge (Thursday), flash PMIs (Friday) and a barrage of housing data should provide an important update on the health of the US economy, though none are likely to be market moving.

Instead, the focus for traders will be on Wednesday’s inauguration proceedings for President-elect Joe Biden. The threat of violent protests looms ahead of what is normally a non-event for financial markets. But with President Trump’s supporters still refusing to accept that the election outcome was fair and after the historic storming of Capitol Hill by rioters on January 6, fresh unrest could unsettle markets, sparking some risk aversion, as it could be foretelling of more insurgence to come.

Should the Senate decide to begin Trump’s impeachment trial as soon as it adjourns on January 19, it could add fuel to the fire on Biden’s inauguration day. However, as long as the protests that are being planned across the US on Biden’s big day do not get too out of hand, the Senate trial for Trump’s impeachment will probably be shrugged off by investors as he would have already left office by then.

Finally, a number of key indicators will be watched out of Australia, New Zealand and the United Kingdom next week. Australian employment figures for December are due on Thursday, followed by the preliminary retail sales report on Friday. New Zealand will publish its quarterly inflation print on Friday. With both countries having so far avoided a third lockdown, the odds of further substantial policy action by the RBA and RBNZ are receding and so the aussie and kiwi are currently mainly being driven by US dollar moves and overall risk sentiment. Hence, next week’s releases are unlikely to provide anything more than some mild knee-jerk reactions. 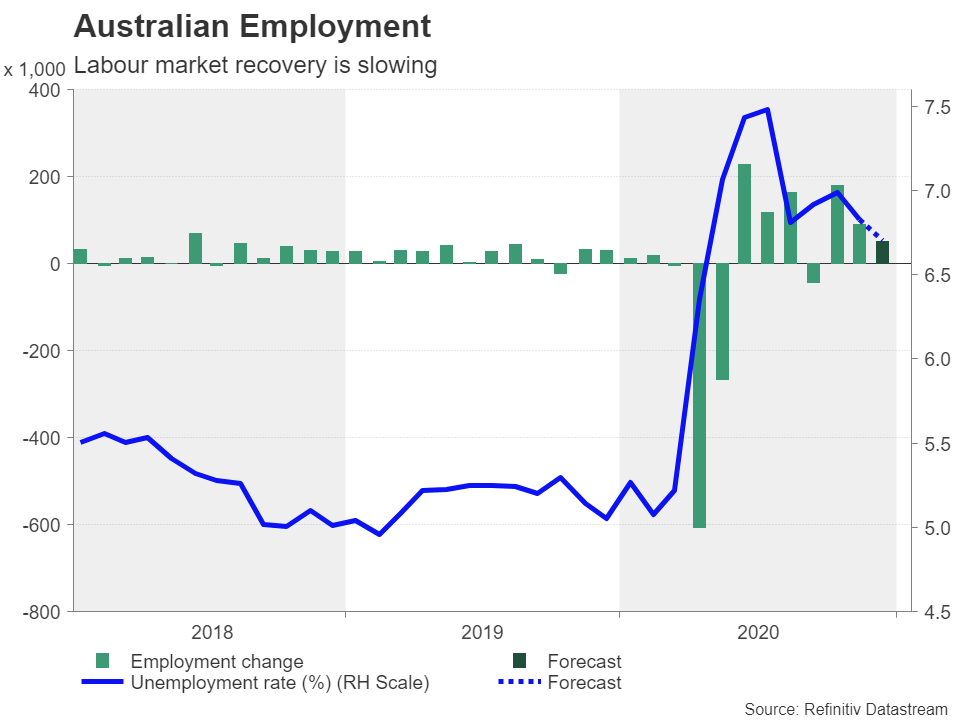 In the UK, inflation (Wednesday) and retail sales (Friday) data for December and the flash PMIs for January (also on Friday) will be a slightly bigger deal for the pound. Dire readings in consumption and the PMI surveys in particular could knock cable off 32-month highs, as investors seem to be underestimating the near-term virus risks to the British economy.

AUD/USD has stalled its upside below 0.6850 after the Chinese Caixin Services PMI disappointed with 46.7 in November. US Dollar weakness and China's reopening-led better risk tone help the Aussie stay afloat ahead of the US ISM Services PMI.

The EUR/USD pair has refreshed its five-month high at 1.0549 in the Asian session. The major currency pair has witnessed a juggernaut rally after a responsive buying action below 1.0440 on Friday. The US Dollar has witnessed immense pressure amid the risk appetite theme.

Gold bulls gearing up for a rally toward $1,822

Gold price is trading close to its best levels in five months above $1,800 at the start of a new week, with risk flows dominating as China expands the covid reopening to Shanghai and Hangzhou. A better risk profile and dovish Fed expectations continue to remain a weight on the USD.