With most markets closed on Monday for the Easter celebrations, it will be a fairly muted week as there’s not a lot on the agenda that can excite markets. The Reserve Bank of Australia’s policy decision will be the main highlight, but the minutes of the Federal Reserve’s and European Central Bank’s last meetings could stir some reaction too as policymakers tread water so as not to deepen the bond rout. Outside of the central bank sphere, employment numbers out of Canada and the ISM non-manufacturing PMI in the US will be the only notable releases to watch.

RBA to reassert message on yields

It seems that slashing the cash rate to record lows, introducing yield curve control and launching QE were not enough to convince markets that the RBA means business when it comes to its desire for achieving low borrowing costs. A comparatively milder hit to the economy from the Covid-19 pandemic and a swift rebound in Australia’s largest trading partners prompted many investors to price in a rate hike in 2022 – sooner than the RBA’s guidance of 2024.

But what really fuelled market chatter about RBA tapering, which sent yields skyrocketing, was doubts about the central bank’s commitment to active participation in the bond markets. Well, those doubts were soon squashed as the RBA not only doubled down on its bond purchases but also squeezed out short sellers who were threatening to undermine its policy of pinning the three-year yield at 0.1%. 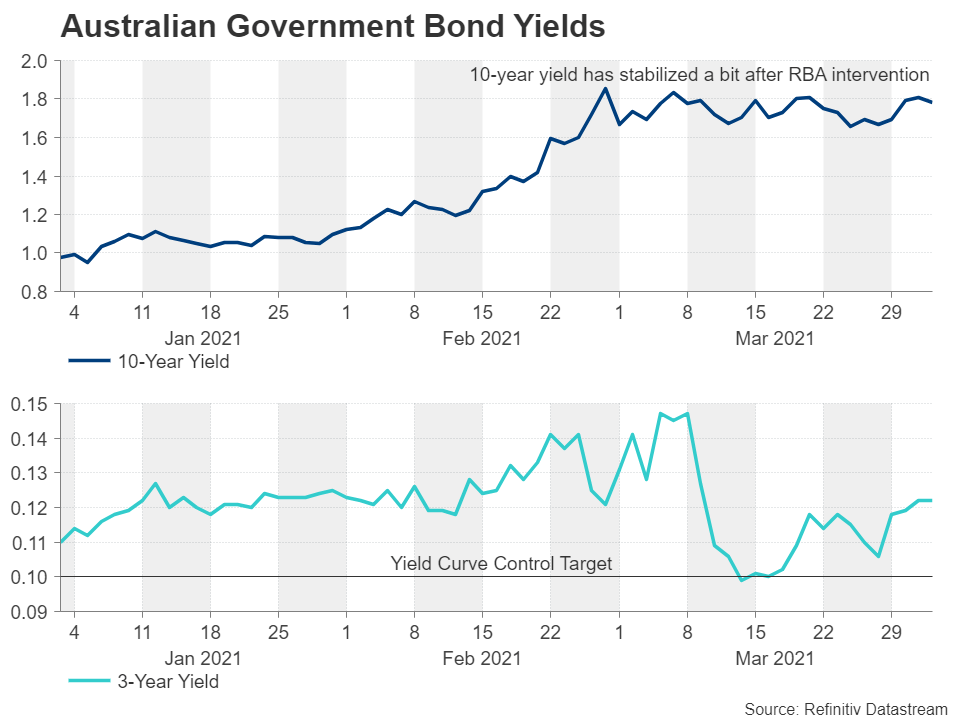 Following all the bond market volatility of the past month, the RBA might try and do a better job of getting its message across in its policy statement on Tuesday. A strongly dovish tone could be quite damaging for the Australian dollar, which has been stuck on the backfoot against the US dollar for the past month.

Fed minutes: More of the same?

Fed officials have been pretty consistent lately in tying the surge in yields to economic optimism and rebuffing expectations that the build-up of inflationary pressures that is being observed right now will be anything more than transitory. Bond traders might finally be heeding that message as the rise in Treasury yields appears to be slowing and stock markets have stopped panicking. However, if the US recovery continues to go from strength to strength as more of Biden’s stimulus makes its way through people’s pockets and a rapid vaccination campaign allows virus curbs to be loosened further, it’s hard to see US Treasuries remaining so calm for much longer. 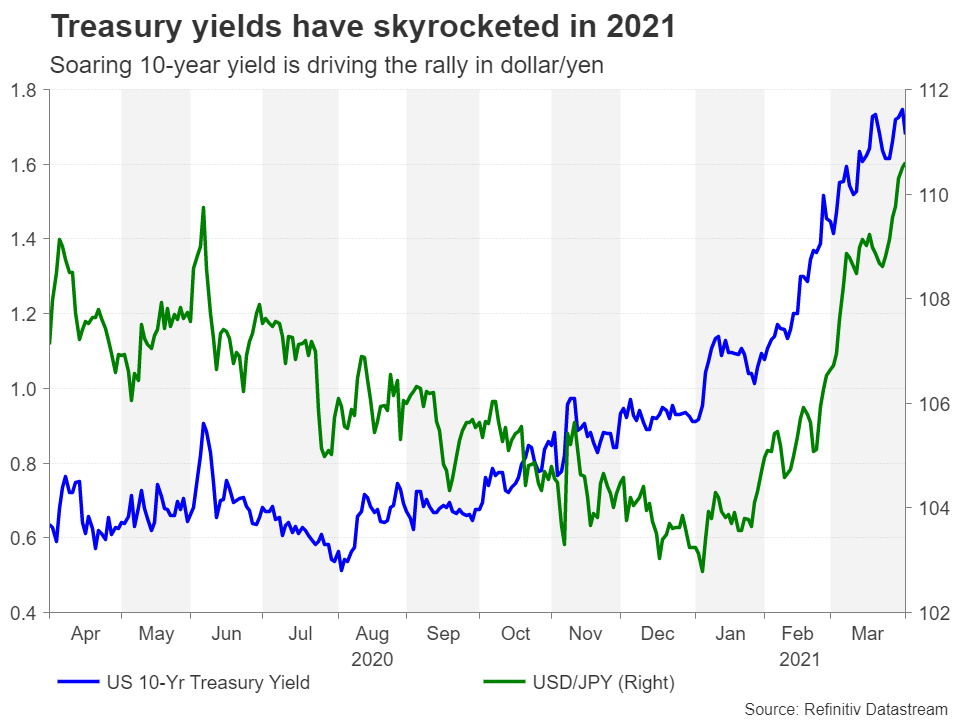 That would then turn the spotlight on what the Fed’s definition of “disorderly” is as policymakers have indicated that only under such conditions would they start to become concerned about the rout in bond markets. The minutes of the March FOMC meeting due on Wednesday might shed some light on what the Fed regards to be disorderly movements and whether all committee members are truly as relaxed about inflation as they have so far demonstrated to be.

The slightest hint that some policymakers are apprehensive about letting the economy run hot could trigger another selloff episode in Treasuries, lifting yields and the dollar. However, there’s also a risk the minutes might reveal that Powell & Co have already begun discussions on how they might respond to a sudden tightening in financial conditions, which would have the opposite effect on yields and the dollar.

Ahead of the minutes, February factory orders and the ISM non-manufacturing PMI for March will be watched on Monday, with the producer price index rounding up the week on Friday.

Will ECB minutes spoil the retreat in Eurozone yields?

The ECB will publish its account of the March policy meeting a day after the Fed on Thursday. Unlike the Fed, the ECB has taken an aggressive stance against the rise in bond yields, arguing that they could lead to premature stiffening of financial conditions. After all, the European recovery is much more fragile than America’s and Eurozone bonds have simply been caught up in the global yield storm. This “unwarranted tightening” is what persuaded the ECB to announce a faster pace of asset purchases at the March meeting, with the subsequent negative impact on the euro providing an additional incentive for policymakers.

However, unless the upward pressure on Eurozone government bond yields were to subside in the coming months, the PEPP’s firepower might start getting depleted much faster than expected and so investors will be looking for clues as to how open policymakers are to the idea of expanding the size of their asset purchases again. But it’s probably too soon for this to become a hot issue just yet given that there’s still plenty left in the PEPP envelope so the main focus for the March minutes will be on the extent to which policymakers are willing to reverse the market-driven gains in yields. Differing views on this matter within the Governing Council could raise doubts about the ECB’s determination to keeping Eurozone yields low, which could result in yields pushing higher and in turn, lifting the euro. 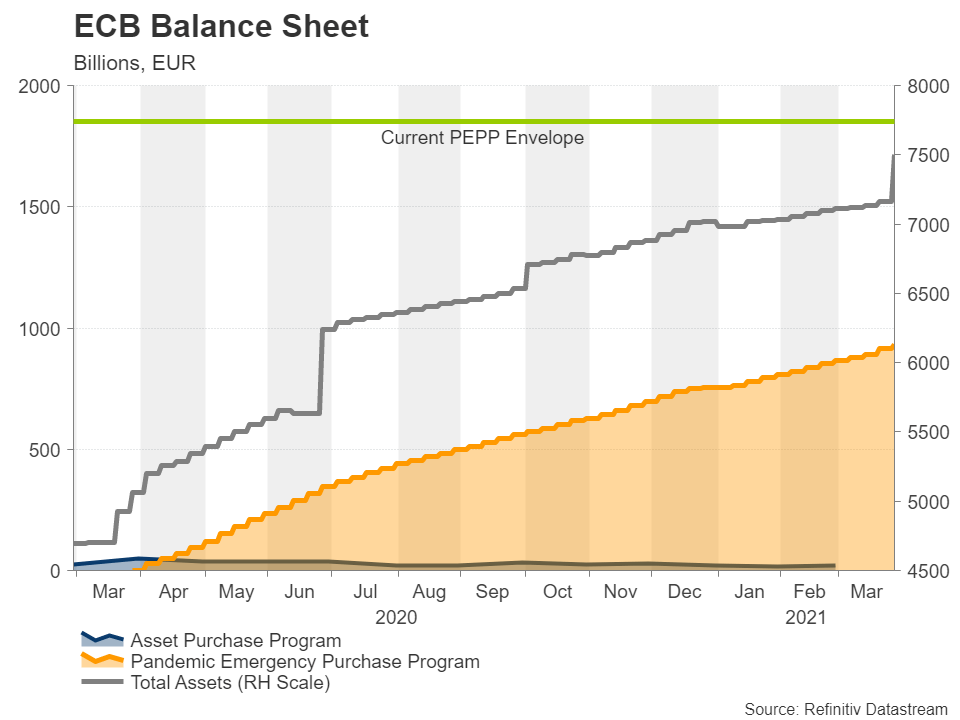 On the data front, there are no top-tier releases but the final services PMI on Tuesday and German industrial orders and production on Thursday and Friday, respectively, might attract some attention.

The resurgent US dollar, or more specifically, the robust US economy has turned the FX league table upside down compared to how things looked just a month ago. The aussie and kiwi have moved nearer the bottom of the table, the pound has lost its crown at the top and the Canadian dollar has become the second-best performing currency after the greenback. 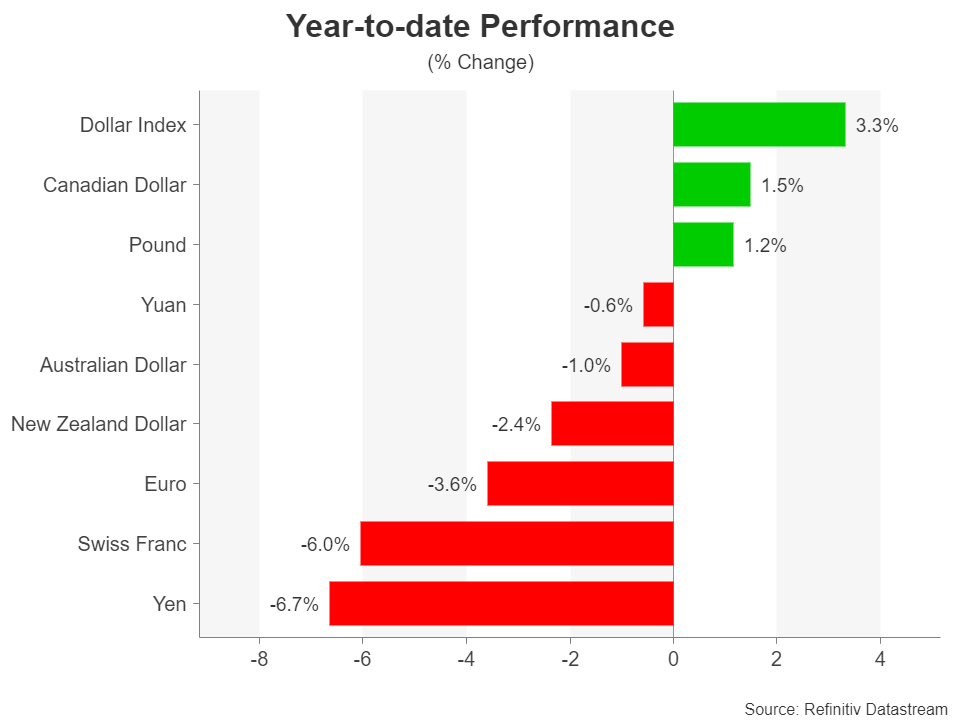 A stronger-than-expected rebound in the Canadian economy, a strong outlook for oil and most importantly, a predicted economic boom in America – Canada’s largest trading partner by far – have given the loonie the edge over its peers.

The March jobs report due on Friday could further support this narrative if there’s another strong beat like there was in the last release. The Canadian economy added an incredible 259.2k jobs in February and employment is forecast to have risen by another 90k in March. The Bank of Canada has already started taking steps to reduce its balance sheet by about C$100 billion and if the incoming data continue to surprise on the upside, it’s only a matter of time before further reductions in asset purchases are announced, underscoring the loonie’s relative appeal.