USD/CAD has ticked higher in the Tuesday session. In North American trade, USD/CAD is trading at 1.2869, up 0.20% on the day. On the release front, there are no Canadian indicators for a second straight day. Bank of Canada Stephen Poloz will speak at an event in Kingston, Ontario. The US publishes CPI and Core CPI for February, both of which are forecast to slow to 0.2%.

The Canadian dollar had a winning week, boosted by strong job numbers on Friday. The Canadian economy added 15.4 thousand jobs in February, after a sharp decline of 88 thousand a month earlier. This was below the estimate of 21.3 thousand, but investors were pleased with the strong turnaround. South of the border, employment numbers were a mix on Friday. Wage growth dropped to 0.1% in February, down from 0.3% a month earlier. This missed the estimate of 0.2%, and marked the lowest gain in four months. The news was much better from nonfarm payrolls, which soared to 313 thousand, crushing the estimate of 205 thousand.

The markets are keeping a close eye on the Federal Reserve, which holds its next policy meeting next week. The Fed is widely expected to raise rates for the first time this year, but the real question is how many hikes we’ll see in 2018. The Fed projection remains at three rate hikes, but strong economic data, especially from inflation indicators, could push the Fed to raise its forecast. Higher US  interest rates makes the greenback more attractive to investors. With the Canadian economy showing more slack than its neighbor, and the uncertainties swirling around the future of NAFTA, it’s unlikely that the Bank of Canada will be able to match the Fed pace of rate hikes, meaning that strong headwinds could lay ahead for the Canadian currency.

Markets Look for a Second Opinion on U.S Inflation 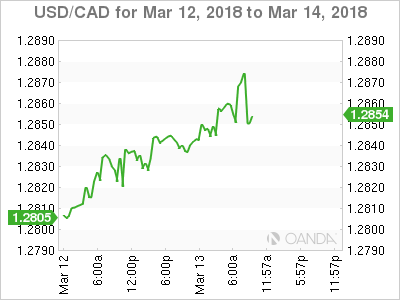