USD/JPY continued its consolidation in the early part of the week staying below 109.25 resistance, but Thursday's finish just below this level set the stage for an easy traverse on Friday and a straight run to the 12-month high.

American Treasury rates and improved US data were the main source of dollar strength.

The massive support the Bank of Japan (BOJ) is providing to equity prices may be having the opposite effect on perception, undermining what little confidence exists in the Japanese economy.

American Initial Jobless Claims, the telltale of the pandemic economy, fell to their lowest level since March 13, 2020, the last week before the lockdown explosion. Fourth quarter growth improved to 4.3% annualized in its final revision from the Bureau of Economic Analysis. 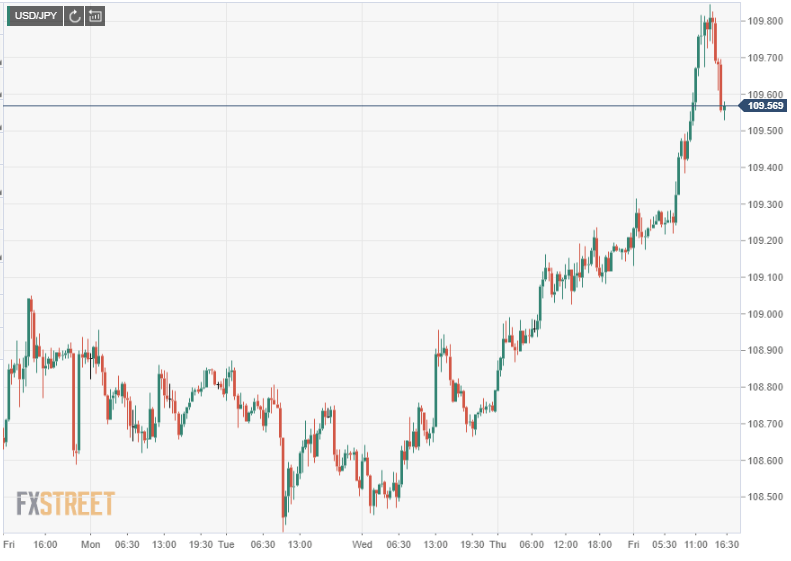 Federal Reserve Chair Jerome Powell threaded the needle in his CARES Act Congressional testimony, promising continued support for the economy and neither praising the sharp rise in Treasury rates as evidence of recovery nor criticizing the bond market for a potential impediment for the still weak US economy.

The 10-year Treasury yield fell 12 basis points to Thursday's close at 1.614% from the prior week's finish at 1.732%, but rebounded to 1.649% on Friday. This benchmark bond remains 73 basis points higher on the year. This is well below its 2-3% range in 2017, 2018 and first-half of 2019 and leaves considerable room for advancement should the US economy continue to improve. 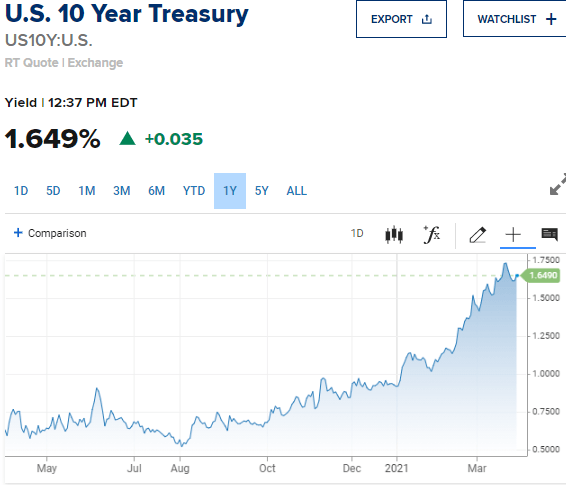 Economic growth in the US is expected to accelerate this year. The Fed's March Projection Materials increased the 2021 GDP estimate to 6.5% GDP from September's 4.2%.

Inflation is also headed for a rapid gain with the Fed's favorite gauge, the Core Personal Consumption Expenditure (PCE) Price index, rising to 2.2% from 1.8% and the headline rate reaching 2.4% from 1.8% by the end of this year.

In his Congressional testimony, Chairman Powell repeated the Fed contention that the inflation increases are temporary due to the base effects from last year's pandemic collapse in prices.

Inflation concerns have been exacerbated by the $3 trillion in stimulus spending from Washington in the past four months.

With the latest $1,400 payment hitting consumer bank accounts this month, another burst of spending comparable to the 7.6% jump in Retail Sales in January could be in order. If that consumption encounters lingering supply shortages from the pandemic lockdown, it would add to the upward pressure on prices.

A final point of bond market worry is the Fed's new inflation averaging policy which will permit prices to range above the 2% target for an undetermined amount of time.

Japanese economic data provided no timely information aside from March prices in the capitol, which fell on the year in the headline but rose slightly in the core rate.

Powell and the FOMC: Is it really about the fed funds rate?

The contrast between the expectant US economy and its reflection in Treasury rates and stagnant Japan has been and remains the currency pair’s story. The 6.9% climb in the USD/JPY this year is, excepting the pandemic panic in March, the steepest since the 14.7% jump from 103.02 on November 3, 2016 to 118.21 that December 18. 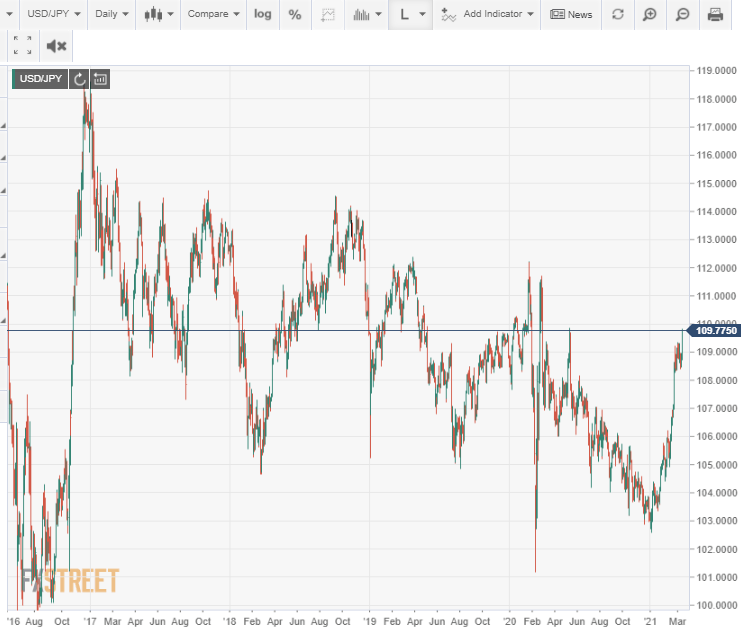 If the US economy performs as forecast, Treasury rates could move substantially higher. With the BOJ committed to its dead-end and seemingly permanent zero rate policy, which inhibits Japan's economic recovery rather than helping it, the yen will stay on the defensive for the immediate future.

The area above 110.00 was heavily traded from late 2016 until the middle of 2019 and the lower levels will present many opportunities for profit-taking.

As long as the rate divergence between the US and Japan continues to widen, the USD/JPY will rise.

Tokyo CPI technically exited five months of annual deflation at 0% in March but the lack of inflation remains the Bank of Japan's perennial problem.

The Coincident and Leading Economic Indexes for January at 90.3 and 98.5 missed their forecasts of 91.7 and 99.1 but both improved their December readings.

The Corporate Service Price Index fell 0.1% in February, far less than the -0.8% prediction and January's 0.4% decline, though it was the fifth negative month in a row.

The Jibun Bank Manufacturing PMI rose to 52 in March as forecast from 51.4 prior. 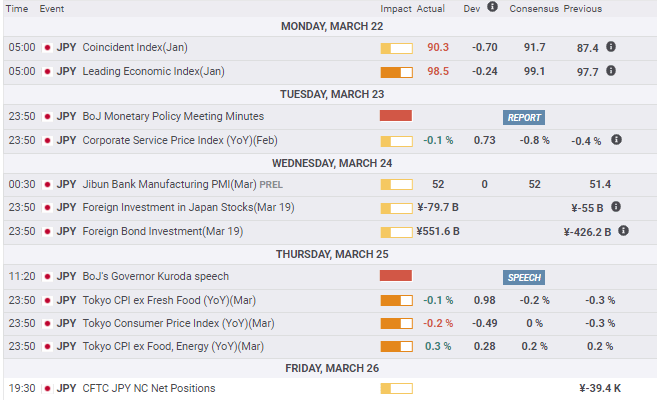 Fed Chair Powell's Congressional testimony had the most potential for a deliberate or inadvertent market impact. Neither was forthcoming. Mr. Powell is a practiced hand at communication and rarely makes a misstep. Economic data was good with Jobless Claims falling below 700,000 for the first time in the pandemic era and fourth quarter GDP improving to 4.3% from 4.1% annualized. Durable Goods Sales were worse than forecast in February but restated the already released Retail Sales information. 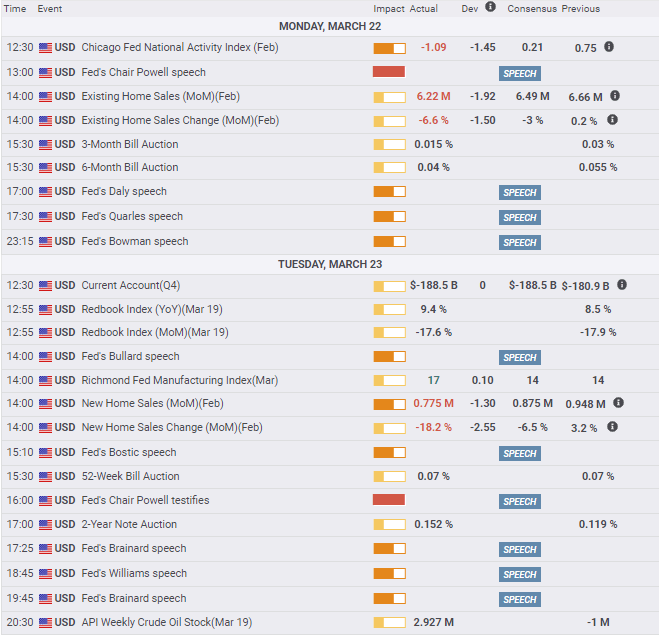 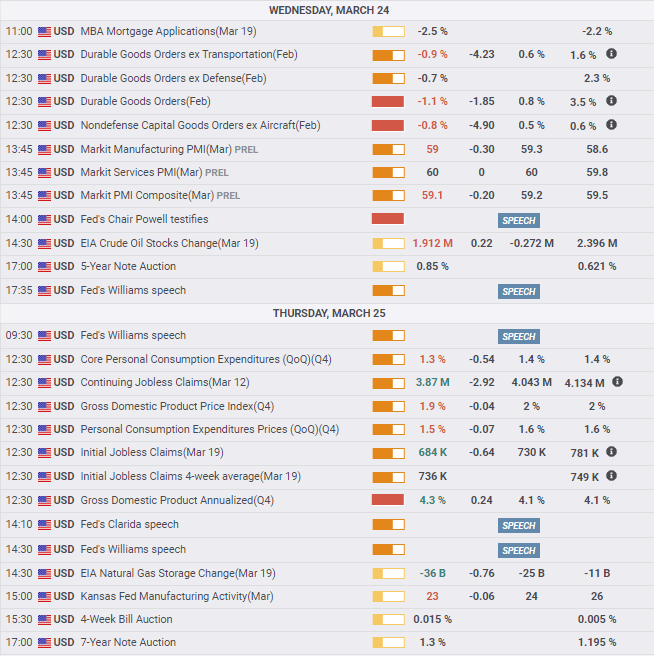 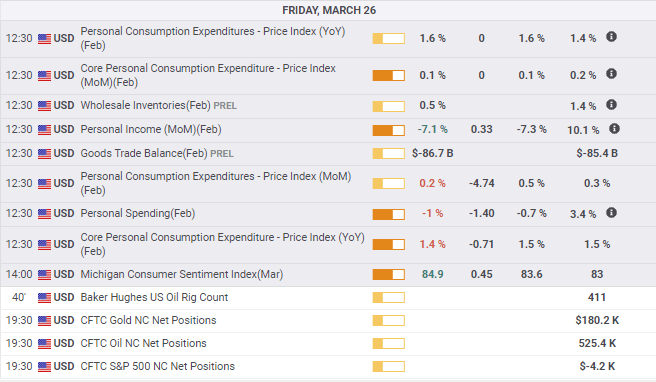 The Tankan Indexes for Q1 will have the most information about Japanese industry but will not affect markets.

The February Unemployment Rate should rise 0.1% to 3% and the Jobs/Applicants Ratio remain at 1.1%. Retail Trade (sales) is expected to fall 2.6% in February on the year, after -2.4% in January. Retail Trade fell 0.5% on the month in January and Large Retailer Sales dropped 7.2%. 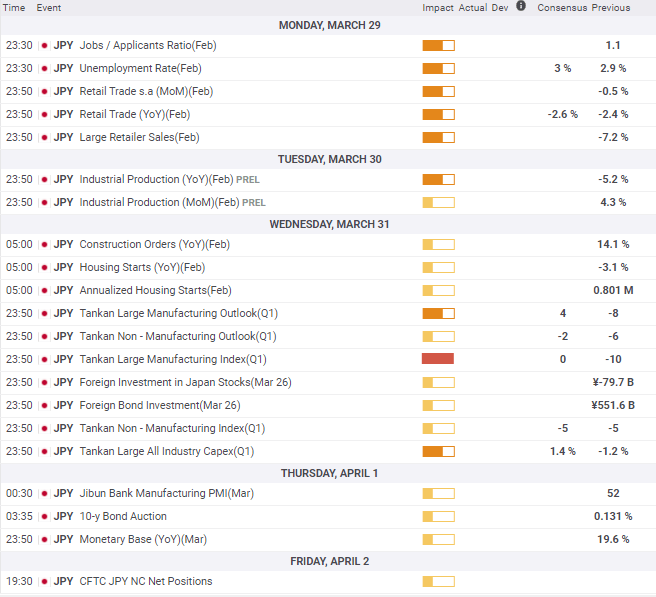 March payrolls rule the week with half-a-million new jobs forecast. If the number is as forecast or better it will give the dollar and US Treasury yields a healthy boost. ISM Manufacturing PMI for March could provide additional positive news.

Conference Board Consumer Confidence is forecast to rise to 96 in March from 91.3. 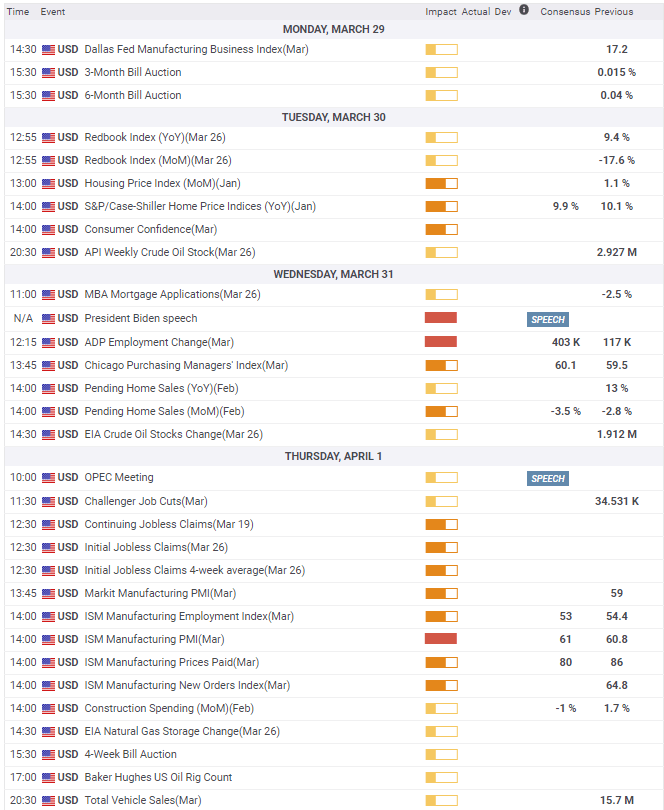 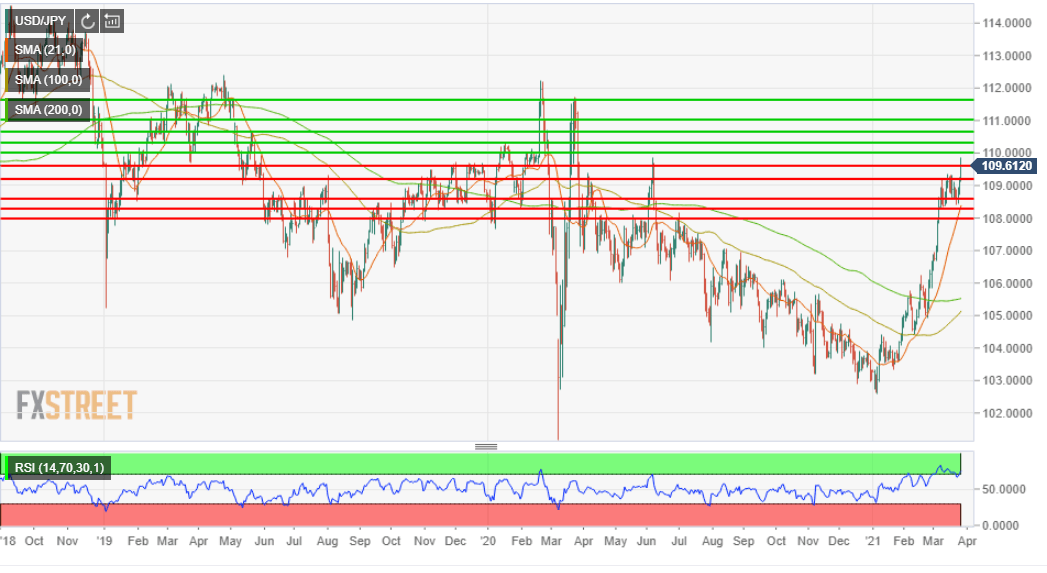 The easy surmount of strong resistance at 109.20 and a weaker line at 109.60 on Friday describes the direction for the week ahead. Consolidation above the base at 109.20 is the likely technical prescription this week.

The two nearest resistance lines at 110.00 and 110.30 are from January 2020 and of light weight. The twin pandemic peaks from February and March would not provide important resistance on their own but they coincide with ranges from the first half of 2019. Resistance above 110.30 will be much harder to breach and a return to the base at 109.20 would not obviate the upward momentum. Only a return to the 108.60-109.20 range would blunt the overall direction.

The FXStreet Forecast Poll has turned bullish in the one-week view recognizing the short-term momentum generated by the breach of resistance at 109.25. The bearish one-month and one-quarter views are technically based and fail to incorporate the fundamental change in the USD/JPY brought about by the rise of US interest rates.