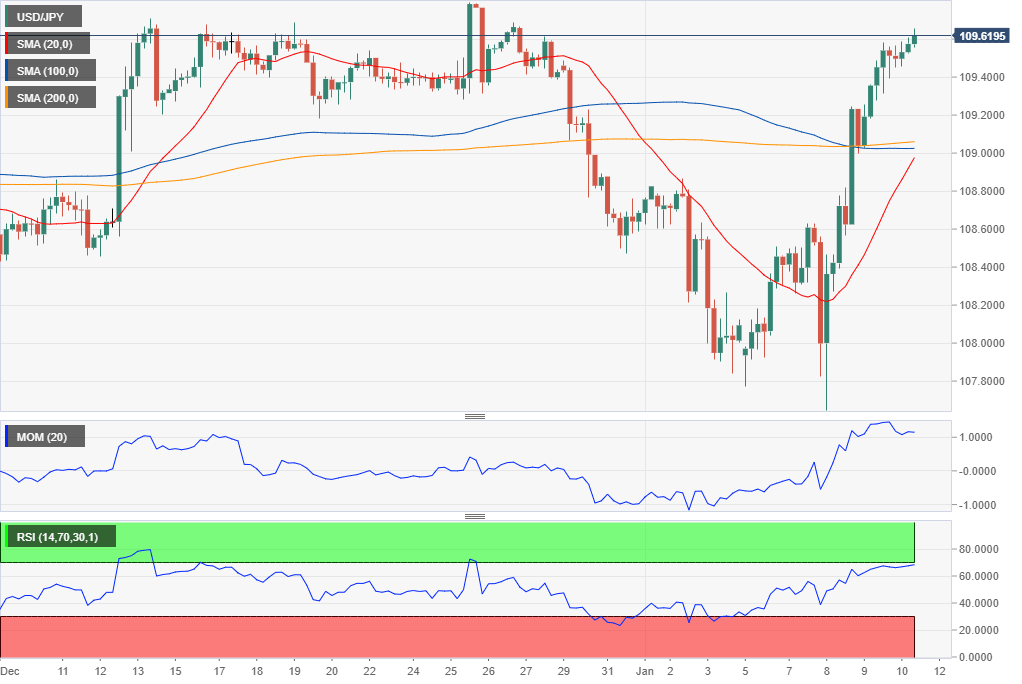 The greenback continues to firmly appreciate against its major rivals, with the USD/JPY trading just a few pips below the critical 109.72 level, December monthly high. Ever since reaching it, the pair has been unable to surpass it, despite multiple attempts. The deescalation of hostilities between the US and Iran after the weekend events continues to boost market sentiment, and the greenback is the overall winner.

Japan released overnight, November Overall Household Spending, which declined by 2.0%, well below the 2.5% advance expected. The preliminary estimate for the Leading Economic Index for the same month, beat expectations by printing at 90.9, while the Coincident Index came in at 95.1, also above the market’s forecast.

Speculative interest is now waiting for the US monthly employment report. Nonfarm Payrolls are expected to have increased in December by 164K after gaining 226K positions in November. The unemployment rate is seen unchanged at 3.5%, as well as the participation rate foreseen at 63.2%. Average Hourly Earnings are seen up by 0.3% MoM and by 3.1% YoY, pretty much unchanged when compared to the previous month.

The USD/JPY is bullish, and an upward continuation will depend on the outcome of the Nonfarm Payroll report. An upbeat result should push the pair beyond the 109.70 resistance area, with room then to extend up to 110.40. A reading below expected could trigger a pullback toward 108.90 a critical support level.

Technical readings in the meantime, favor an upward extension, as, in the 4-hour chart, the price remains well above all of its moving averages, and with the 20 SMA about to cross beyond the larger ones. Technical indicators remain within overbought levels, the Momentum easing but the RSI flat at around 73, rather reflecting the ongoing consolidation than suggesting an upcoming slide.