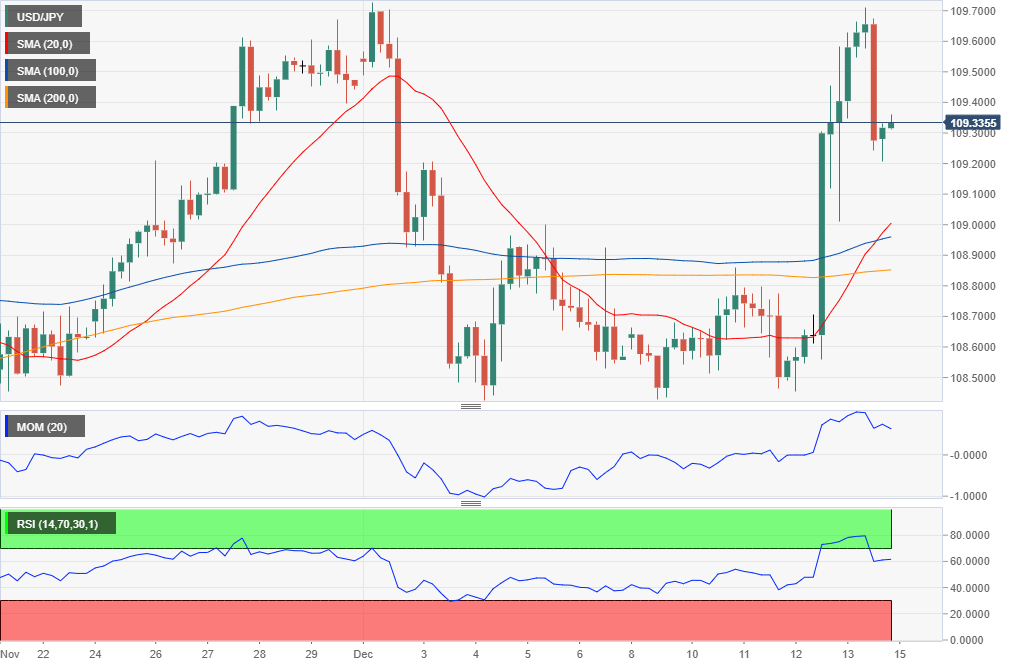 The USD/JPY pair hit 109.70 by the end of the previous week, boosted by news about a trade deal between the US and China, as it triggered hopes that it would put an end to the global economic downturn. The pair eased from the mentioned high to settle around 109.30, as the market remained cautious ahead of the close on the back of contradictory headlines, unable to resume its advance at the end of the news, despite phase one of a trade deal was confirmed. US Treasury yields edged lower on Friday, with the yield on the benchmark 10-year note retreating from 1.95% to 1.82%, weighing on the pair, while US indexes finished the day barely up. Nevertheless, risk appetite will likely keep the pair underpinned at the weekly opening.

This Monday, Japan will publish the preliminary estimate of the December Jibun Bank Manufacturing PMI, foreseen at 48.4 from the previous  48.9, and later the October Tertiary Industry Index, seen up in the month by 0.7% after adding 1.8% in the previous month.

The daily chart for the USD/JPY pair is presenting a neutral-to-bullish stance, as it holds above all of its moving averages, while technical indicators stand within positive levels, although lacking directional strength. The pair retreated after failing to surpass the December high at 109.72, somehow indicating that bulls still hesitate. In the shorter term, and according to the 4-hour chart, however, the bullish case is stronger, given that the pair is well above all of its moving averages, with the 20 SMA advancing above the larger ones, while technical indicators settled well above their midlines, after correcting extreme overbought conditions.

AUD/USD rises above 50-HMA, bull reversal in the making?

The sell-off in AUD/USD seems to have run out of steam, courtesy easing RBA rate cut expectations after upbeat Australian CPI data. The pair trades above the 50-hour average. A close above 0.6765 would confirm a bullish reversal candlestick pattern on the daily chart.

The course of the American economy has not altered since the previous FOMC meeting on Dec last year. 4Q growth is expected to be 2.1% when the preliminary figures are released by the Bureau of Economic Analysis on Thursday.

GBP/USD trades near 1.3025 during the early Wednesday’s trading session. The pair recently broke a three-day-old falling trend line but is still to cross the near-term key resistance confluence.