JPY bid possibly due to fears of a US government shutdown

The retreat from 111.41 to 110.49 could be due to rise in haven demand for the Japanese Yen on fears of a US government shutdown. The US government is reportedly running out of time and according to the White House, the prospect of a shutdown has “ratcheted up”.

The 10-year treasury yield rose to 2.646 percent today; the highest level since 2014. Still, the USD failed to catch a bid. Analysts believe the rise in the yields is at least partially due to concerns about the US government shutdown. Also, yields have risen quite fast this month. A sustained move above 2.63 percent might rattle equity markets, as warned by Bond King Jeff Gundlach earlier this month. Is this one of the reasons why USD/JPY ignored rising yields today.

It's worth noting that the correlation broke down completely at the turn of the year as investors began pricing-in a quicker policy normalization in Japan and Europe. However, there is growing feeling that markets have run ahead of themselves and the BOJ is likely to reiterate its accomodative stance next week.

Will USD/JPY tank on US government shutdown?

The spot could drop below 110.00 levels on the government shutdown. That said, whether the pair slides towards the key support of 107.60 depends on how equity markets behave. According to LPL Financial, in the past 18 shutdowns, stocks fell 56 percent of the time, with an average decline of 0.6 percent. Clearly, the government shutdown does not necessarily mean the slide in equities.

USD/JPY could recover if the shutdown is averted

The unwinding of Yen longs initiated today could push the pair higher to 111.41. Further gains towards 112.00 cannot be ruled out as investors may price-in the sharp rise in the treasury yields and could scale back BOJ tightening expectations.

That said, the technical charts favor slide to 107.60 and see bullish reversal only above 113.84. 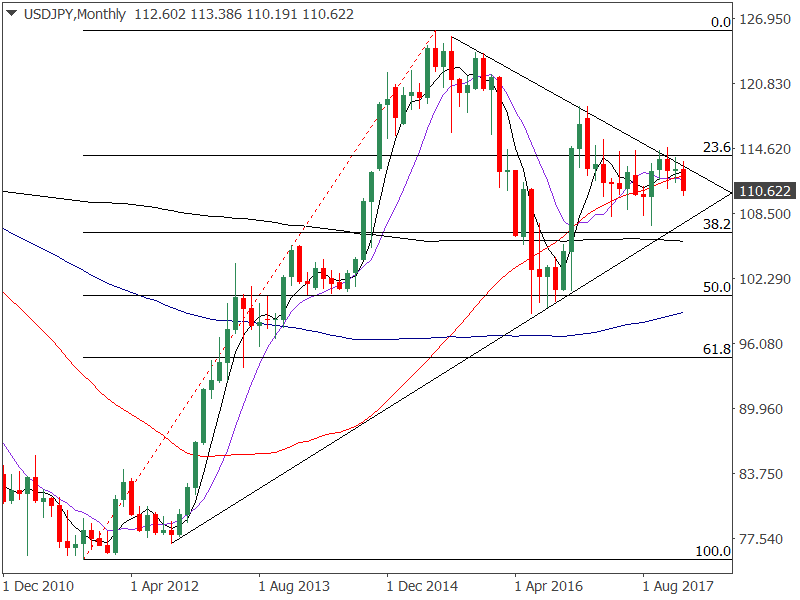