We have a full plate of US data today, including retail sales and industrial production, plus the Empire State index and PPI. We already know retail sales will disappoint because of auto sales and the shift from goods to services; ex-autos, Bloomberg has a forecast of 0.4% m/m.

If there is any lingering doubt about inflation, PPI might get some attention but is expected to be the same 6.2% y/y as in April. In the US, PPI does not lead CPI as it tends to do in economies that are less services-dependent. Still, the 6.2% is the biggest gain “since 12-month data were first calculated in November 2010,”

Most attention will go the FOMC policy meeting today and tomorrow, and unless there is a surprise, we are all going to be deflated by 2:30 tomorrow afternoon. Fed chief Powell is among the most competent of federal officials and he plays the press like a violin; it’s practically impossible for him to give anything away about the Fed’s “secret” date for tapering or the first hike. Remember that it’s a minority of Board members who think the first rate hike could or should be brought forward. A ton of attention will get laid on the new dot-plots, but we are skeptical–they are not definitive.

What is the state of the world and does that help us figure out anything about currencies? Bloomberg is interested in the vast rise in shipping costs, a worry even if some commodity prices may have peaked. The Baltic Dry index includes commodity costs as well as shipping costs, and indeed it’s on a tear. Trading Economics reports the “Baltic Dry Index rose 3% to 2,949 on Monday, a peak since May 13th and extending gains for a fourth straight session, supported by economic recovery and despite China’s efforts to limit rising commodity prices.

This implies inflation fears may have been tamped down by the Fed and Big Bank economists, but the fear remains. Most importantly, it remains among the demographic that counts–the Average Joe. Yesterday's NY Fed survey shows households see inflation at 4% a year from now, the highest in about 8 years. It should ease to 3.6% over the next two years. The reasoning? Rents, home prices, and food. The bond market does not agree and the 5-year breakeven persists lower at 2.44% from 2.71% in May. 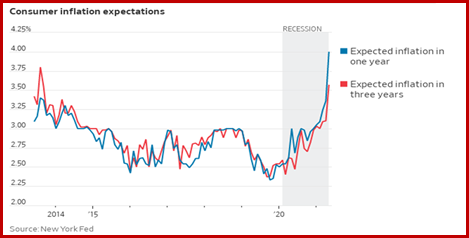 It doesn’t matter if household inflation expectations are wrong. What matters is the behavior the expectations set off, like accelerating purchases and hoarding. The lumber bubble may have burst, but houses are still vastly more expensive. Various experts warn us not to worry about inflation, and the last generation doesn’t know what all the shouting is about, but old-timers know that if the inflation mind-set gets a grip, there will be hell to pay.

This leaves a gaping hole in the dollar narrative. As long as the Fed seems reasonable and is perceived as having a grip on inflation so that it can attend to jobs and the fairness of job distribution, the dollar waxes and wanes normally. But if the Fed is seen as behind the curve on inflation, a very real risk, the dollar can fishtail between expectations of the Fed staying the course or capitulating. Uncertainty about this particular outcome is why, probably, we have no action to speak of in currencies these days.

More about the Decline of the Dollar: The FT had a story about why Big Bank analysts believe the ever-fading dollar story, starting with the twin deficits. The solution to over-indebtedness is always and forever devaluation, aka “debasement of the currency.” Kings were doing it centuries ago. Lenin talked about it and Keynes pointed out he was right.

There’s something else, too, and that’s the “dollar smile” in which the dollar gains when the US is growing faster than everyone else and also when it’s in the dumps--because it’s the safe haven. The threat is “synchronised global growth, sending capital out towards to the rest of the world for better returns.”

Citigroup has an interesting take–global wealth has had a big buildup but there is a shortage of safe assets in which to place it. US Treasuries will keep their appeal in perpetuity. See the chart. “Furthermore, as the Japanese and German central banks have bought up more and more of their own sovereign bonds, US Treasuries have become an increasing slice of that proportionally smaller store of truly safe assets,” over 40% today from 30% in 2000. The ostensible purpose of the article is to advise on what equities to buy to escape losses from a dollar drop–the answer is high-tech.

US Political Tidbit: We have a new chapter in the latest Trump scandal in which he ordered the Justice Dept to spy on members of Congress (and their staff) and the press purportedly for national security reasons (to find leaks) but more likely for political reasons, and worse, got gag orders so the targets didn’t know they were being surveilled until just this month. The surveillance found no leaks, by the way. We still don’t have specifics on precisely what leaks were sought or who ordered the surveillance and gag orders, with both Trumpian AG’s (Sessions and Barr) denying they knew anything about it, which is improbable in the extreme.

The independence of the three branches of government is a big deal. Demands for an investigation are getting louder as well as a deep house-cleaning by the new AG appointed by Pres Biden, who is tone-deaf. The surveillance and gag orders were still operational well into the Biden presidency without him noticing or doing anything about it, including firing those involved. Now the NYT reports Trump also sent demands to the Justice Dept that it override the election in states he lost. These demands xwere like those of the Texas AG which went to the Supreme Count and was refused because one state lacks the standing to question of the acts of another state.

As we wrote at the time of the 2020 election, Congress has a lot of legislation to write to close the holes in the presidency through which Trump weaseled. We can no longer assume conventions and norms suffice to prevent corrupt and self-serving conduct. The problem is that the Republican in the Senate are fully obstructionist and another issue is Biden preferring to move forward instead of looking backward.