The US economy seems to have broken free of its pandemic restraints in March with manufacturing optimism at a four decade high, payrolls adding nearly one million workers and unemployment at a 12-month low.

Service sector Purchasing Managers’ Indexes (PMI) from the Institute for Supply Management (ISM) are expected to reflect this economic recovery. The overall index is forecast to climb to 58.5 from 55.3. The Employment Index is projected to rise to 53.9 from 52.7 and the Prices Paid Index to drop to 68.3 from 71.8. The New Orders Index was 51.9 in February.

The excellent and unexpected March Manufacturing PMI results should be duplicated in the service sector.

Factory production, though only about 15% of US economic activity, is considered a reliable indicator for the whole economy and a good predictor for the far larger service sector.

At 64.7 March Manufacturing PMI registered the highest reading since 1983, in the midst of the Reagan economic boom. A far more modest gain to 61.3 from February’s 60.8 had been predicted. 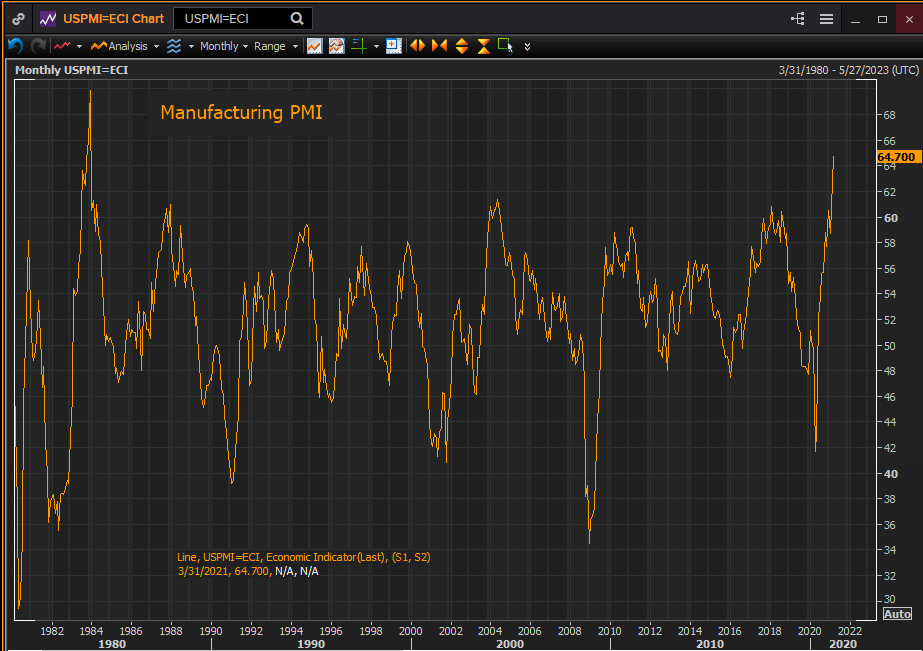 Component indexes were equally strong.The New Orders Index at 68 was the highest since January 2004 and more importantly the nine-month average was the best in 17 years. 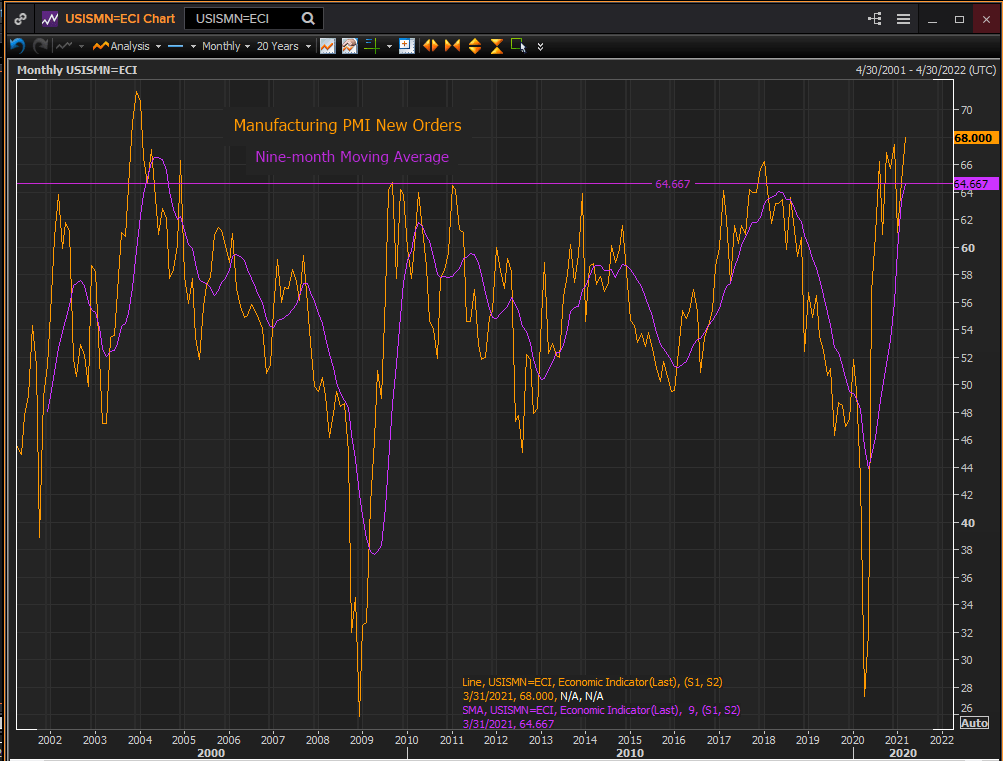 The Employment Index provided the greatest surprise. From 54.4 in February, the consensus expectation called for a decline to 53 in March. Instead it  jumped to 59.6.

American employers fulfilled the most optimistic expectations for hiring in March in a revival led by the long dormant leisure and hospitality sector.

Nonfarm Payrolls increased 916,000, more than 40% over the 647,000 consensus forecast. It was the largest monthly increase since1.58 million last August. Revisions raised the January and February totals by another 156,000 bringing the first quarter total to 1.617 million.

Employment gains were spread throughout the economy, with one very positive sign the 280,000 new positions in the hotel and travel industry, where the lockdowns and social restrictions had wrought the most grief. Bars and restaurants, probably the second most damaged sector, added 176,000 workers. Construction jobs increased 110,000 after 56,000 largely weather related losses in February. Factory work added 53,000 hires and retail jobs climbed 23,000 following the prior month’s 28,000 . 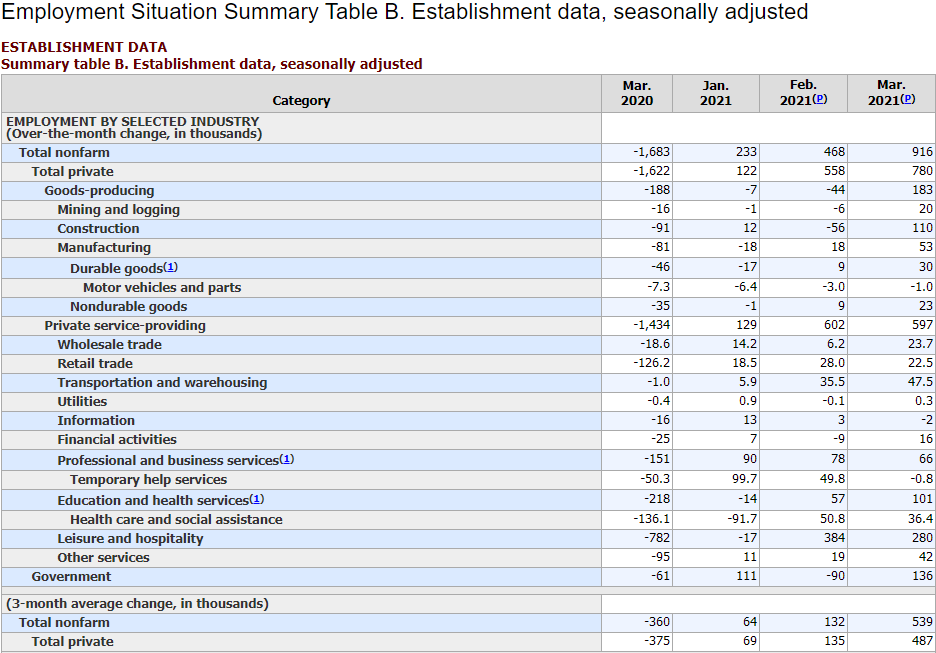 The Conference Board March Consumer Confidence index jumped to 109.7 from 91.3 in February, easily surpassing the  96.9 forecast. Sentiment is now mid-way between the  February 2020 score of 132.6 and the April panic low of 85.7. 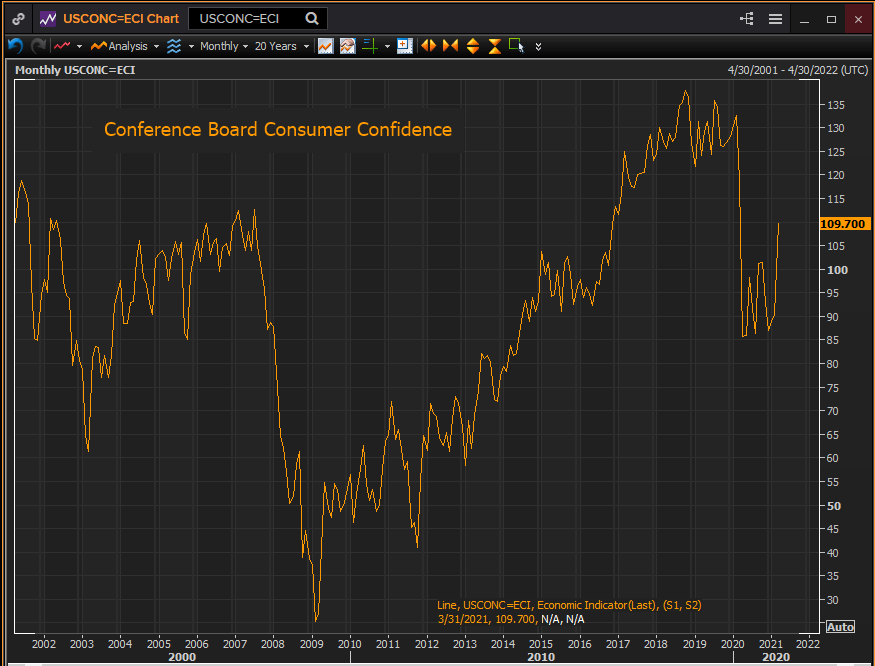 The Michigan Consumer Sentiment Survey seconded the Conference Board results. Its headline survey reached 84.9 in March, the highest score in a year, from 76.8 prior, outpacing the 78.5 forecast. This index is also about half-way between 101 in February 2020 and the April low at 71.8.

These two consumer indexes, released before the Labor Department data, mirror the reality which showed up in the payroll report. Employment is the most important factor in consumer sentiment.

Reactions in the credit and currency markets to the excellent NFP report were muted.

Equities were closed for the Good Friday holiday and though open, bonds and the dollar markets were understaffed with most institutions and traders waiting for the new week before responding. On Friday the benchmark 10-year Treasury rose three basis points to 1.714%.

European markets again start the week closed for Easter Monday.  Asian and US markets are open but reaction will probably wait for the more volatile New York session.

The remarkably upbeat NFP report has confirmed the Manufacturing Employment Index and the same improvement should be anticipated for the Service Sector PMIs.

In effect, the ISM Service Employment Index has already been reported in the March NFP data.  It and the rest of the service sector indexes should be considerably stronger than the consensus estimates.

The dollar and US yields will take their cues from the labor market.