Food and gasoline were the driving facts in US consumer inflation last month, pushing the price index to its highest annual increase in 13 years while the core rate remained stable.

The Consumer Price Index (CPI) rose 0.4% last month after a 0.3% gain in August, reported the Labor Department Wednesday. A 0.3% increase had been predicted by analysts.

Over the last year prices climbed 5.4%, slightly ahead of the 5.3% forecast. It was the largest 12-month increase since July 2008 and the second highest in three decades 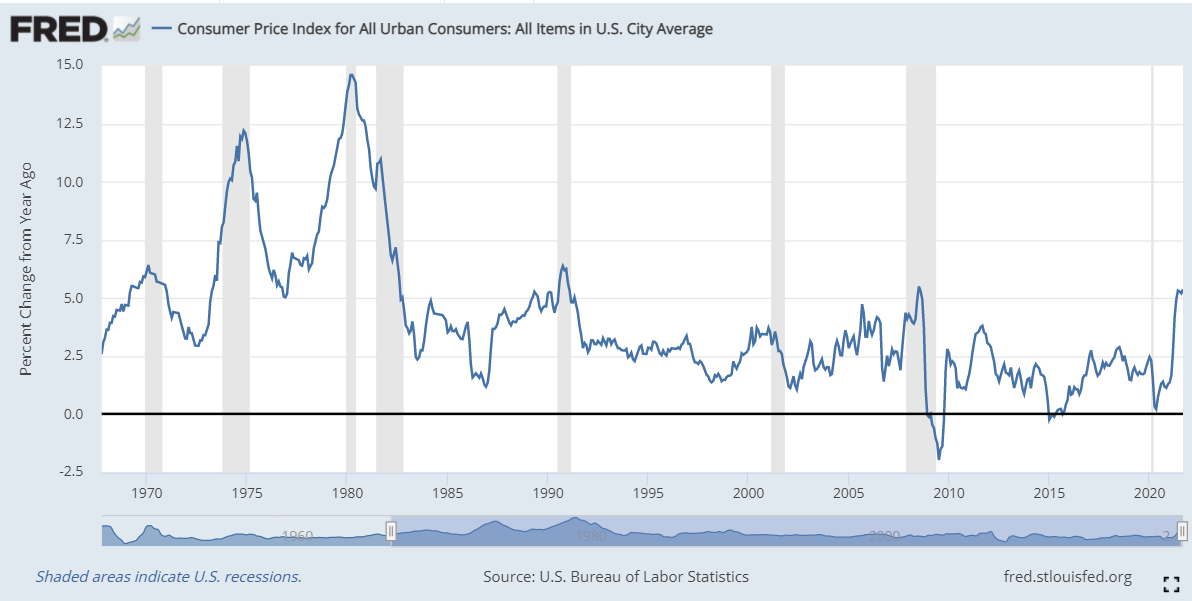 Core CPI, excluding food and energy prices, rose 0.2% in September up from 0.1% in August and was unchanged at 4% for the year.

Shelter expenses added 0.4% for the month and 3.2% for the year. The homeowners rental equivalent rose 0.4% in September, its biggest monthly increase since June 2006.

Several categories of consumer goods saw losses, underlining the intensity of the generalized increase in the economy, despite sector declines..

Used car prices, which had received much attention recently, dropped 0.7% for the month, lowering the 12-month gain to 24.4%. With new cars in short supply due to component and computer chip shortages, prices rose another 1.3% in September, leaving the annual increase at 8.7%.

Clothing prices slipped 1.1% in September while transport costs fell 0.5%. Nevertheless, purchase costs in both sectors were higher on the year, 3.4% and 4.4% respectively.

With consumer prices for September largely as anticipated, and having avoided a feared acceleration, Treasury yields retreated from their sharp increases of the past three weeks.

Equites were flat with the Dow falling mere points and the S&P 500 rising about 0.10%.

The dollar lost ground against all the majors but retained most of its recent gains.

St. Louis Fed President James Bullard said in a Tuesday interview on CNBC that he supports starting the taper process in November and that the bank should be more aggressive in withdrawing economic support.

Also on Tuesday, Atlanta Fed President Raphael Bostic said the causes of the current inflation “will not be brief.”

These comments were backed up by the minutes of the last  Federal Open Market Committee (FOMC) released at 2 pm which elaborated on the September statement, “If progress continues broadly as expected, the Committee judges that a moderation in the pace of asset purchases may soon be warranted.”

The September CPI numbers have not moved the discussion of the prospective Fed taper in either direction.

Consumer inflation is at its highest level in a generation and the factors driving the price gains, particularly wages and energy costs, are proving to be far more than transitory.

Labor, component and raw material shortages, shipping delays and consumer demand are all conspiring to drive prices to their highest sustained increases since the1980s.

EUR/USD is trading above 1.0500, as the US dollar surrenders early gains despite the risk-off market mood. The euro finds support from hawkish ECB commentary and upbeat EU sentiment data. Policy Panel at the ECB Forum awaited.

GBP/USD drops to weekly lows near 1.2150 amid risk-aversion

GBP/USD is dropping towards 1.2150 amid risk-aversion and a broadly subdued US dollar. Investors remain wary amid looming recession and Brexit worries. Powell and Bailey are due to speak at the Policy Panel at the ECB Forum on Wednesday.