Inflation may still surprise markets but it will not change Federal Reserve policy.

The Personal Consumption Expenditures Price Index (PCE) should follow consumer inflation higher in May, though analysts have predicted a slight moderation in the annual rate. Core PCE prices are forecast to rise 0.4% in the month after a 0.3% gain in April. For the year prices are expected to increase 4.7%, down from April's 4.9%. Overall PCE prices rose 0.2% in April and 6.3% for the year.

The Federal Reserve’s official 2% target for the core PCE rate has been observed almost exclusively in the breach. From the financial crisis of 2008-2009 to the recovery of 2021, inflation was routinely beneath its goal. Since the spring of last year it has been permanently above. In the fall of 2020, the Fed changed its inflation accounting from a single target to an average. The governors intended to let prices increase faster than 2% for an unspecified period, long enough to produce an average rate around 2%.

Given the Fed’s then stated conviction that any price increases would be temporary, the policy would have obvitated any pressure to raise rates for several months of above target inflation. Prices, however, have escaped Fed control. The six-month average for core PCE prices is 5.0%, for 12 months it is 4.4%.

Consumer prices took an unexpected jump in May.

The overall Consumer Price Index (CPI) had been forecast to add 0.7 after April's 0.3% gain. Core prices were predicted to drop to 0.5% from 0.6% in April. The annual rate was expected to be unchanged at 8.3%, and the core rate was to fall to 5.9% from 6.0%. The declines were expected to confirm that price pressures had continued to ebb from March’s four-decade high of 8.5% and February’s core peak of 5.3%. 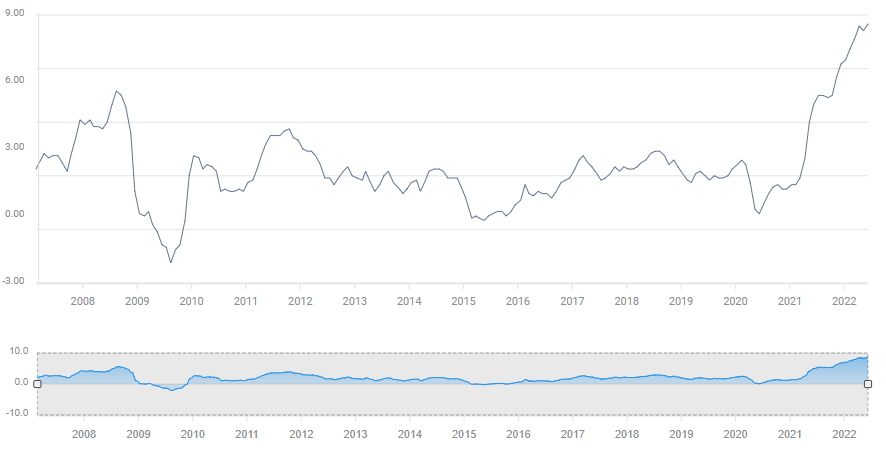 The Fed’s surprise was so great that it took the highly unusual step of anonymously sourcing a Wall Street Journal article during the standard two-week comment blackout period prior to every Federal Open Market Committee (FOMC) meeting. The piece let markets know that the governors were considering a 0.75% increase. At the previous FOMC meeting on May 4, Chair Jerome Powell had all but promised a 0.5% increase.

The Fed duly hiked 75 basis point to a 1.75% upper target. Market expectations for the July 27 FOMC moved in accordance and are now 89.1% for a second 75 point increase.

The Producer Price Index (PPI) that tracks inflation in the manufacturing process moderated in May. Overall, prices rose 0.8% on the month as expected and at 10.8% were slightly softer on the year. Core prices added 0.5% on a 0.6% forecast and 8.3% annually on an 8.6% supposition. 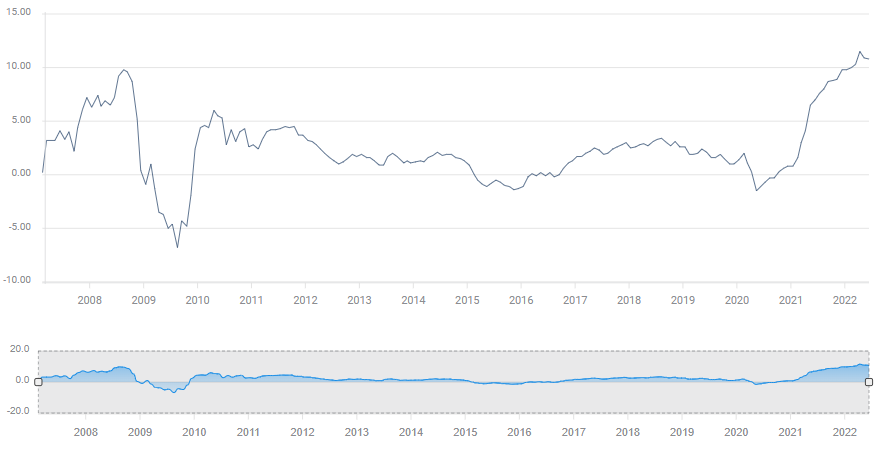 While annual price increases have fallen from their all-time March records of 11.5% and 9.6% for core they are still considerably higher than consumer inflation, making further retail increases likely as producers pass on the remainder of their own expense escalation.

West Texas Intermediate (WTI) the North American crude oil pricing standard rose 10.2% in May. Opening at $103.44 on May 1, the finish at $114.04 all but guarantees price increases throughout the economy. Oil is the world's most ubiquitous commodity. It is present in some fashion in almost every product or service of a modern economy.

The nationwide cost of a gallon of regular gasoline rose 10.6% in May.

Federal Reserve policy is set through the July 27 FOMC meeting and very likely through the end of the year.

If the governors add another 75 basis points this month bringing the upper target to 2.50%, it will still require another 100 points over three meetings to reach the Fed’s own projection of 3.4% at the end of the year.

In a real sense inflation is now moot. Higher-than-expected PCE results will only reinforce Fed policy. Lower than forecast inflation will still leave price increases so far above Fed’s goals, that a year of further increases is the default assumption.

The risk of a recession from the combination of an inflation-induced consumer pullback and a slowdown in rate sensitive sectors is the chief threat to markets. Second quarter GDP is reported on July 28, one day after the Fed meeting. The Atlanta Fed’s latest estimate is 0.3%.

Will a negative print for the second quarter, and a traditional if not official recession, dissuade the Fed?