The ECB left rate settings unchanged, as widely expected. On PEPP, the message is still that the emergency program will run at least through the end of March 2022, while bond buying will continue at a “significantly” faster pace than in the first months of the year. So far – so unchanged and expected. The main focus today was on the forward guidance and the statement now reads that:

“the Governing Council expects the key ECB interest rates to remain at their present or lower levels until it sees inflation reaching two per cent well ahead of the end of its projection horizon and durably for the rest of the projection horizon, and it judges that realised progress in underlying inflation is sufficiently advanced to be consistent with inflation stabilising at two per cent over the medium term. This may also imply a transitory period in which inflation is moderately above target.” 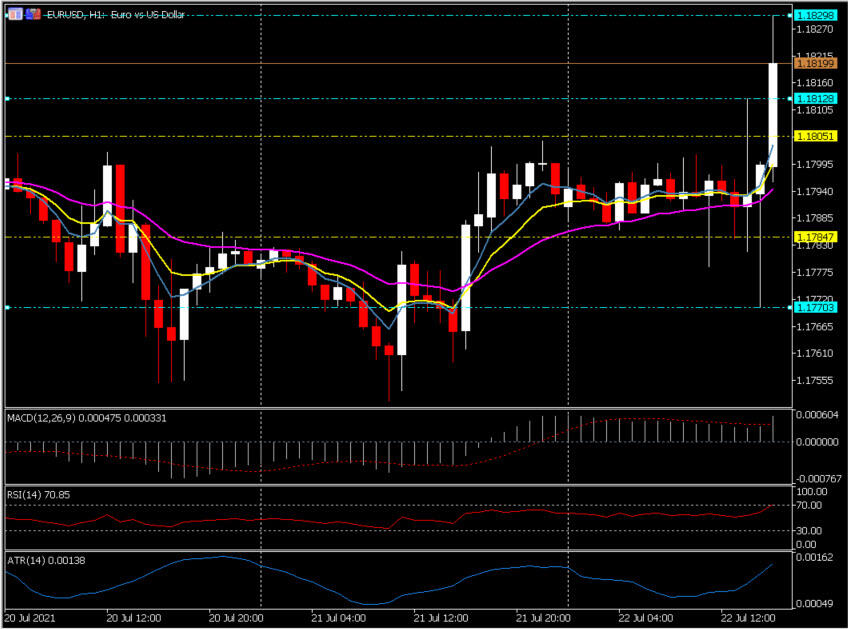 So the bar for rate hikes has been raised, but apparently that wasn’t enough for Bunds, which have extended losses. Still, Eurozone spreads remain narrower and the 1.2 bp rise in the German 10-year still compares to a 2.0 bp pick up in the UK 10-year rate. Treasury yields are currently 2.5 bp higher at 1.31%; during Monday’s collapse they went under 1.13%.

The Dollar edged lower following the jobless claims outcome, where both initial and continuing claims were higher than consensus. USDJPY dipped to 110.11 from over 110.20, while EURUSD topped at 1.1790, up from near 1.1770, having been as high as 1.1812 following the ECB announcement. However, as US markets open flat, EURUSD is posting a new high for the day at 1.1825 and USDJPY trades at down to test 110.00 again.

EUR/USD advances above 1.18 the ECB decision

EUR/USD has risen above 1.18 in response to the ECB's dovish forward guidance. The bank wants to see inflation forecasts reach 2% before acting and may allow an overshoot. The dollar is edging lower with US yields.

GBP/USD is trading around 1.3750, extending its rebound from five-month lows. Sterling has shrugged off a growing EU-UK row over the Northern Irish protocol and persistently high covid figures in the UK. The BOE's Broadbent sees no rush to respond to inflation.

Why is Tesla stock moving

Tesla underperformed the broad market on Wednesday closing just under 1% lower at $655.29. Equity markets have been recovering from the hammering they took on Monday but Tesla did not get the memo and remained in a bearish mood.