American manufacturing activity slowed in November from its best level in 25 months, with spreading COVID-19 closures pushing the employment index into contraction even as new business remained near its 17-year high.

The Purchasing Managers' Index (PMI) from the Institute for Supply Management (ISM) dropped to 57.5 last month from 59.3 in October, just missing the consensus estimate of 58.

Manufacturing is often considered a leading indicator for the economy as a whole even though factory production accounts for only about 15% of all US economic activity.

The New Orders Index which measures incoming business, dropped to 65.1 from October's more than 17-year high of 67.9 and extended its string of strong months to six. The forecast had been for a drop to 53.4.

Economists have consistently underestimated the number of orders flowing to US factories since the sector vaulted into expansion in June. In that half year the consensus forecasts from the Reuters survey of analysts have averaged 14.75 points below the actual statistic. Every month but one has missed by double digits. The average New Orders score from June through November of 63.1 is the highest for an equal period in over two decades.

Purchasing managers surveys were pioneered by ISM over 50 years ago and have long been one of the most reliable forward-looking statistics. Readings over 50 indicate expansion and those below contraction of the sector or business.

Employment in November contracted with the index dropping to 48.4 from 53.2. which had been the first positive month since July 2019. The forecast was 51.4.

New filings for unemployment benefits have climbed 9.4 % in the last two weeks from 711,000 on November 6, the lowest of the pandemic era, to 778,000 in the week of November 20. The forecast for this Thursday's edition is essentially unchanged at 775,000.

This jump of 67,000 in claims is not the first or even the largest increase in the eight months of the pandemic, but it is the only one coordinated with a clear potential cause.

Claims jumped 127,000 in the two weeks from July 10 to July 24 and again in August they rose 133,000 in the week of August 14. The difference is that in the summer the pandemic was quiescent, there were no new business restrictions and there was no obvious cause for the rise in claims. The situation may be different now.

Stocks are looking beyond the immediate COVID-19 implications of the ISM report to the implementation of a national vaccine program and lift that will give to the sectors of the economy battered by the shutdowns.

Even with the major equity averages at or near their all-time highs, the potential expansion in the first and second quarters next year could give GDP a strong boost.

Despite the historic and off-setting GDP collapse and recovery in the second and third quarters, -31.4% and +33.1%, and the rising number of new business restrictions nationwide, the US economy is still growing smartly. The latest estimate from the Atlanta Fed GDPNow model on December 1 after incorporating the November ISM figures, puts forth quarter growth at an 11.1% annualized rate. 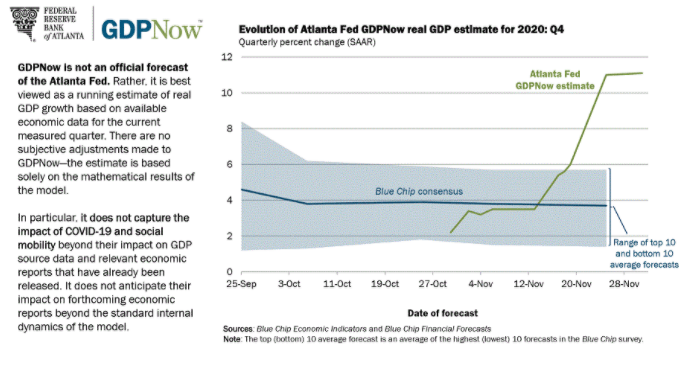 The dollar has been the chief victim of the rising COVID-19 counts in the United States. The concern that the economy will slow substantially or even dip into recession and the Fed's heavy hand on interest rates have kept the currency on the defensive.

The EUR/USD broke out of its four-month range on Tuesday reaching 1.2076 and closing at 1.2072 its first finish above 1.2000 since April 27, 2018. The sterling, yen, Swiss franc, Australian, New Zealand and Canadian dollars all rose against the greenback. 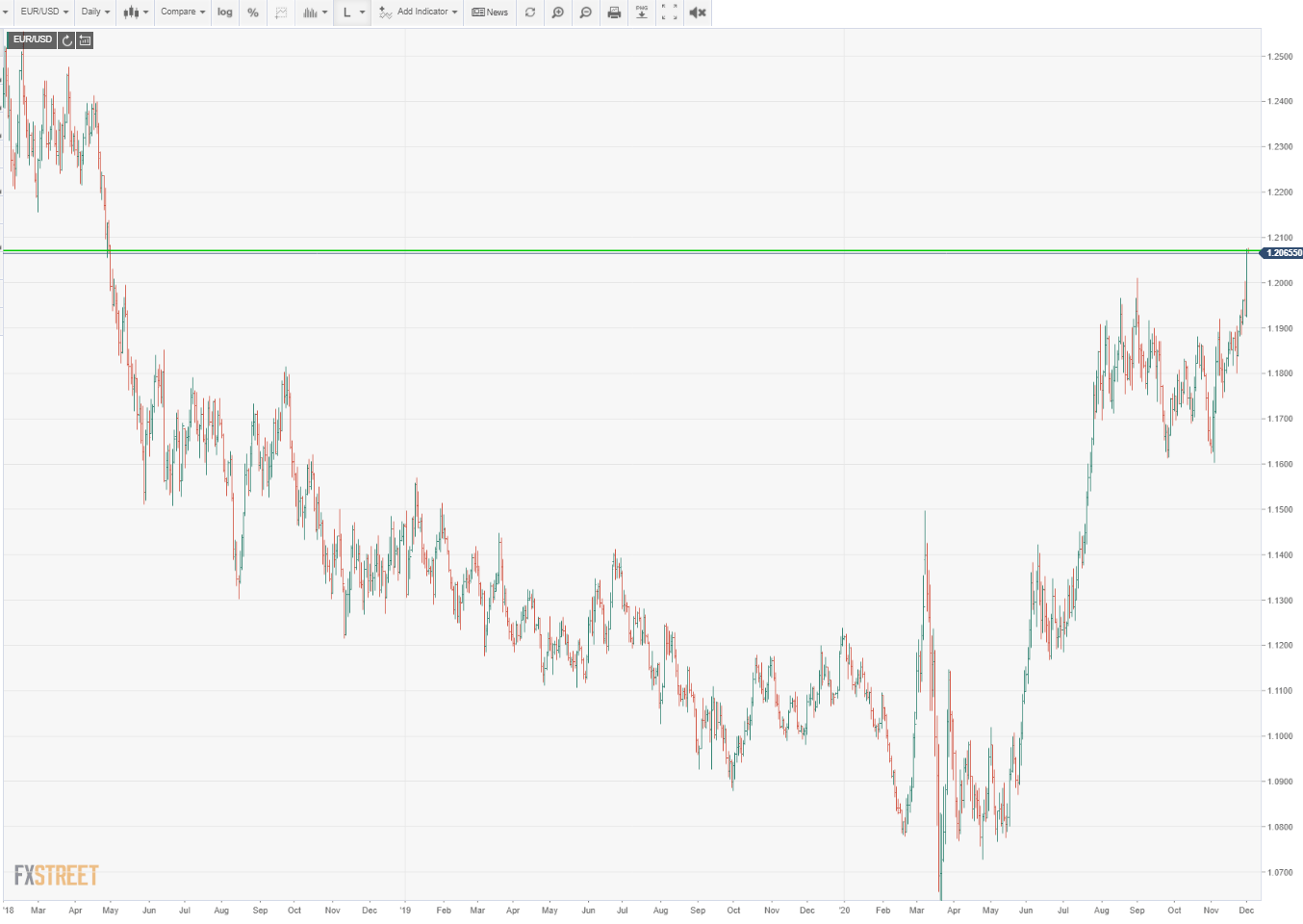 For the time being, the possibility and historical record of better US economic growth in the wake of catastrophe, is less important than the still rising infections rates and the ever present Fed.