Can the US recovery continue as COVID-19 cases reach new levels? The question has not changed since diagnoses began to rise the fall.

Judging from the manufacturing sector where the Purchasing Managers' Index from the Institute for Supply Management (ISM) has been in expansion for six months and is expected to add a seventh in December, the answer is yes. The run from June has been the best half-year since the first six months of 2019. 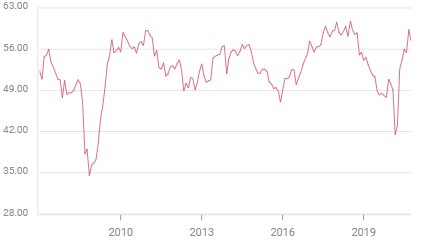 The New Orders Index jumped from 31.8 in May to 56.4 in June and has not been below 60 since then. The forecast of 74.8 for December is astonishing. If accurate it would be the second highest score for expected business in the 70 odd years of the survey. 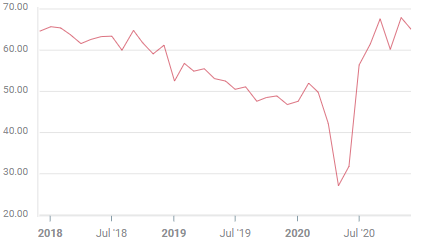 Employment has lagged the other indexes throughout the recovery. It only reached the 50 expansion-contraction mark in October at 53.2 after 14 straight negative months. Then dropped back to 48.4 in November. It is projected to rise to 50.7 in December.

Claims have had a jumpy two months as reverting lockdowns in California and restaurant restrictions in New York and elsewhere have pushed people back onto the unemployment rolls. 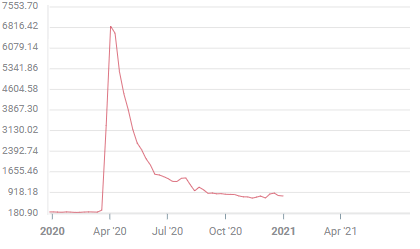 Continuing Claims have more stable with the last rise in the November 27 week and the latest reporting on December 18 at 5.219 million, the lowest of the pandemic era.,

Nonfarm Payrolls have weakened considerably in November falling to 245,000, less than half the 641,000 average of the prior two months. The December gain, to be released this Friday, is expected to be just 100,000. The unemployment rate is forecast to rise 0.1% to 6.8%. It would be the first increase since April.

Manufacturing executives are looking and planning for the end of the pandemic sometime in the spring or early summer. Despite the gloom in the labor market that expectation should continue to keep the factory outlook optimistic.

The US dollar had a miserable December, losing ground in every major pair. Trends in December, especially in the liquidity-starved final two weeks, tend to exaggeration.

A strong December manufacturing ISM, ignoring the current COVID-19 diagnoses, could be just the tonic the greenback needs.