O utlook: The tariff story was crude and rude from the start but we persist in thinking Trump has put his finger on something the economists have wrongly neglected for decades. Trump com-plains we are being ripped off by some $800 billion per year. He doesn't actually know what he's talking about, but the $800 billion number is real enough.

Even with the dollar cheaper overall by about 10%, exports fell in January. Exports to China fell 28.1% and the deficit with China rose by 16.7% to $36.0 billion, 60% of the total deficit and the highest since Sept 2015. In the report earlier this week, total imports were unchanged.

Overall, the Jan trade deficit was worse by 5% to $56.6 billion from $53.9 billion (revised) the month before and more than forecast, the largest deficit since Oct 2008. The US has a trade surplus with Cen-tral and South America, Hong Kong, Brazil and the UK, but deficits with all the big countries—China, EU, India, Japan and Mexico. Even if the deficit with OPEC were wiped out, it would gain only $2.5 billion.

It's incomplete to look only at exports. The numbers for the ratio of total trade to GDP is very different in each of these countries. Then there's services as part of total trade, often not singled out. And in the end, what balances everything is capital flows, and as the issuer of the reserve currency, the US has a leg up on just about everybody. Normally, a giant trade deficit like the US' should shove the currency down until trade equilibrates. The US didn't have to do that because it got all those countervailing capi-tal inflows.

All the same, Trump is not wrong that an $800 billion deficit is a Bad Thing and should be fixed. And as we said before, fixing the trade deficit is not a flash in the pan for this White House. Maybe the pro-cess will be bad and maybe it will get more refined, but the US is not likely to suffer economically nearly as much as some other countries for whom exports are a large percentage of GDP. Threaten-ing tariffs and other measures, old-fashioned mercantilism, has a whiff of extortion about it. Well, yes. Bad policy, crudely issued—but not without favorable effects for the US.

Bloomberg is the latest to put the trade wars in the perspective of the Triffin dilemma, something we wrote about in The FX Matrix. That section has a sub-head "Reserve currencies are always doomed," referring to the unhappy fact that the reserve currency issuer has an obligation to the rest of the world to maintain sufficient supplies of money for transactions and savings—regardless of what policy on mon-ey supply it might want for its own inflation-control purposes. With more dollars abroad than at home, managing money supply is a central bank nightmare. The short-term goal of managing domestic condi-tions runs smack into the long-term needs of those holding dollars as trade numeraire or reserves. Evi-dence: when the Treasury announced it would discontinue issuance of long-term (30-year) bonds in 2001, everyone freaked out. Now Trump is proposing 50 and 100-year issues.

Probably without knowing it, Trump is telling the world the US to go ahead and dump the dollar as a reserve currency, It's a burden the US doesn't want. The US would prefer to have more balanced trade and the jobs presumed to accompany higher exports/lower imports than to be the beneficiary of what the French used to called "exorbitant privilege," referring to lower interest rates that accrue to the re-serve currency because everyone must have some.

Some of the implications have probably escaped the Trump gang. First, it's merchants who determine the currency used as the numeraire in trade, not governments. The euro is more widely used than be-fore, but no single commodity or trade expense (shipping) is globally accepted as being denominated in euros. China may make some advances in trading oil or other commodities in yuan, but it's not a freely convertible currency backed by long-standing property and contract law, so not likely to become the reserve currency or numeraire any time soon.

And finally, the US has the biggest and most varied asset markets. The US invented ETF's, options, and more mutual funds than there are instruments. It was US economists who wrote about optimal asset allocation and won the Nobel for their labors. Every single innovation in equity and fixed income secu-rities in the world was devised in the US, including bundling credit card and auto loan and mortgage liabilities into a "security" (and then letting ratings agencies mis-label them). In financial markets, the US is the world leader for liquidity and inventiveness. It's not clear the reserve currency status has much to do with it. Maybe some demand for fancy instruments arises from foreign necessity to hold dollars, but on the whole, central bank and sovereign funds hold their dollars in plain old Treasuries. And the supply of Treasuries is only going to grow, with the Fed reducing holdings and the Treasury needing to fund higher fiscal deficits.

Again, we keep coming around to the same deduction—Trump is going to get away with it. As the market sees this evolving, the dollar can recover. And it can recover fairly quickly, too. Effects of trade policy/reserve policy won't be seen for a couple of years, but traders like to anticipate. Suddenly our long-standing anti-dollar bias, based in part on the twin deficits, needs to be seen in a different

light. At some point attention is going to turn to the architect of the new policy, Peter Navarro. Cable news talking heads diss him as not being able to get a job in the Goldman Sachs mailroom, but Navarro has a PhD in economics from Harvard. Of course he knows about the Triffin dilemma. Of course he knows that this could be the beginning of a new world financial structure. He is, by the way, author of a book titled Death by China. Everyone mourns the loss of Gary Cohn as a sane and reasonable guy who fa-vored globalism over nationalism. But widen your perspective, and consider that if Navarro gets away with it, fifty years from now he will be touted as the guy who saved the US economy. At this moment we don't see quite what it will look like in 50 years, but the world just got stood on its head.

Is it even remotely possible that Trump actually understands this shape-shifting of the global economic landscape? Maybe all he sees is that it's Disruption with a capital D.

And let's never forget that the real target is China. To what extent is China behind the new willingness to talk by Kim Jun Un? If China has nothing to do with it, Trump's ridiculous stance gets all the credit. It's still ridiculous and unseemly and dangerous, but if insulting an enemy brings him to the table, gol-ly. Of course a hundred things are going on in the background that we don't know and will never know, but the appearances do count. Meanwhile, consider who is responsible for the global glut in steel. See the chart from the DailyShot. 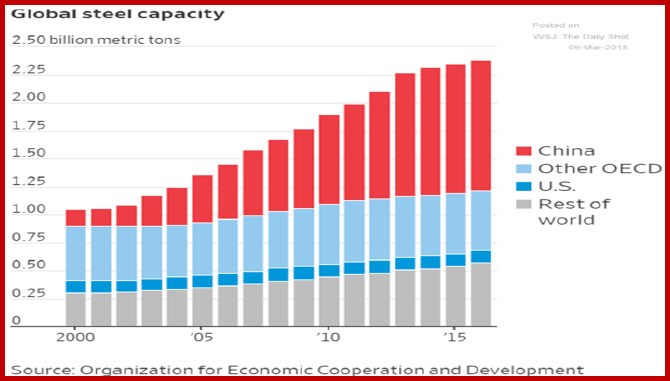 The aluminum charts looks the same. The FT, alongside every other press report and commentator, ac-cuses Trump of capriciousness and a Wild West feel. But what if he does actually have some dim glim-mering of a Long Game? We probably need to assume that Navarro does.

But again it's not the number of newly employed that counts—it's the hourly earnings. See the chart from the WSJ. The market is expecting a 0.3% monthly gain in hourly payrolls, the same as January. A dip might be dollar-negative. The running average for year-over-year on the year-over-year basis was 2.6%. Jan brought 2.9%. A dip back to 2.6% would not be abnormal but it would be taken that way. 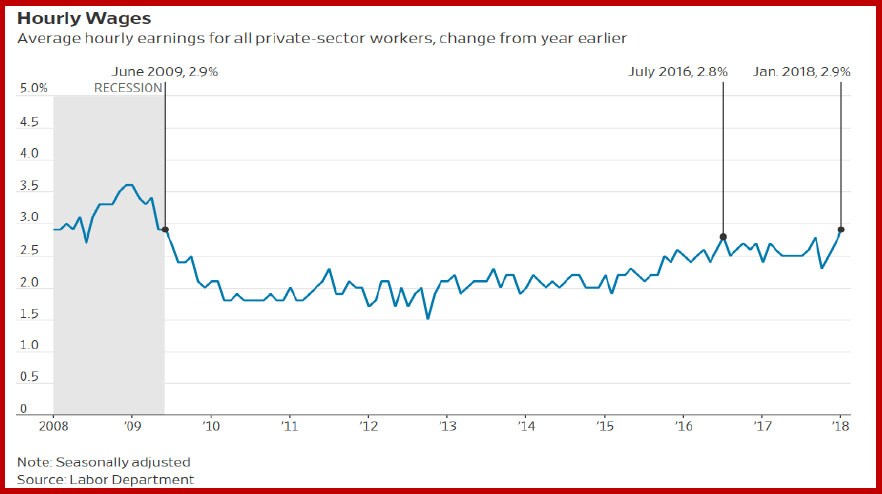 Lots of reasons are put forth by some smart people about why wage growth is laggardly—corporate chieftains using tax cuts for stock buybacks and bonuses instead of rewarding labor, concentration of industries to fewer and larger entities, etc. Never mind all that. Without higher wage growth, the econo-my doesn't get household spending or inflation. And until there is a crunch for labor, especially skilled labor, and not just the occasional shortage, wages will not be going up. The implication is that neither will inflation.

An increasing number of commentators say we won't be getting inflation even as high as 2.5%, the new normal and mentioned as something the Fed might adopt. That's because the demographics—Baby Boomers—really will stop overspending at some point and the still-working are not getting the income. We probably defeated deflation, but that doesn't mean a V-shape trend-shift into actual infla-

tion. We have to expect the usual FX spikes this morning—up on good data and then down on profit-taking, or down on bad data and then an upside recovery to restore the mini-trend. Or some other combination of spikes for some other combination of interpretations. In the end, payrolls doesn't matter anywhere near as much as re-structuring the global trade and financial landscape. And that is, for the moment, dollar-favorable. If Draghi had been more positive and less cautious about ending QE, perhaps the out-come would be different. But the US is forging ahead while "old Europe" is obeying old rules. The FX market likes forgers.

Note to Readers: Thank you for the many notes of condolence for our power outage yesterday. Aside from planning to move farther south to escape the weird effect of global warming making the North-East colder, our response was to buy some new rechargeable lanterns. (Check out Hammacher Schlemmer's Best.)