When it comes to trade, Trump is economically stupid, but he isn't stupid enough to fight everyone one at once.

The Trump administration said Friday it would postpone for six months a final decision on whether to impose broad tariffs on automobile and auto-part imports.

Mr. Trump has repeatedly warned he could slap tariffs on cars produced by major trading partners including the European Union and Japan, citing national-security concerns. The administration has sought to use the pressure from that threat to negotiate bilateral trade agreements.

The industry would have had relatively little ability to adjust supply chains quickly in response to tariffs, so automakers expect tariffs would lead to sharp price increases. A new 25% tariff could boost the average price of a car sold in the U.S. by $4,400, according to a report from the Center for Automotive Research. The average price of an imported vehicle would rise even more, by about $6,875, the group said.

“The idea that U.S. automakers are threatened by automotive imports is fundamentally flawed and ill-conceived,” said John Bozzella, president of Global Automakers, a trade association representing the industry. “No automaker or auto-parts supplier asked for this ‘protection.’ We are headed down a dangerous and destructive course and strongly urge that the administration not impose tariffs or quotas.”

Tariffs are a bad idea in general. Trump's proposal was against the wishes of the auto industry Trump allegedly sought to protect.

The idea that car imports are a threat to US national security is best viewed as a lie so obviously bad that it's a joke. But it was no laughing matter to the Big Three.

The EU says no. It is a genuine red line.

Under silly EU rules, all it takes is one country to say no. And France will not allow trade talks to include agriculture.

France is the one nation worse than the US with the US sugar, ethanol, and corn lobbies.

Meanwhile, Trump's foolish trade war with China has farmers reeling. The failure of Beijing and Washington to settle differences further clouds the outlook for farmers already hit by floods and bad weather.

Agriculture has been among the U.S. economic sectors hit hardest by the yearlong trade conflict with China. Now that a deal has slipped from the grasp of negotiators, farmers are facing the likelihood that the deepest downturn in the agricultural economy since the 1980s could be prolonged.

The U.S. Department of Agriculture, in the absence of a deal, is cobbling together a farm relief program that will total somewhere between $15 billion and $20 billion, according to Agriculture Secretary Sonny Perdue. This is the second such aid package since the trade fight began.

Many farmers doubt the scale of that aid package is anywhere near sufficient to make up for a trade spat that has shut them out of a lucrative Chinese market of 1.4 billion consumers. 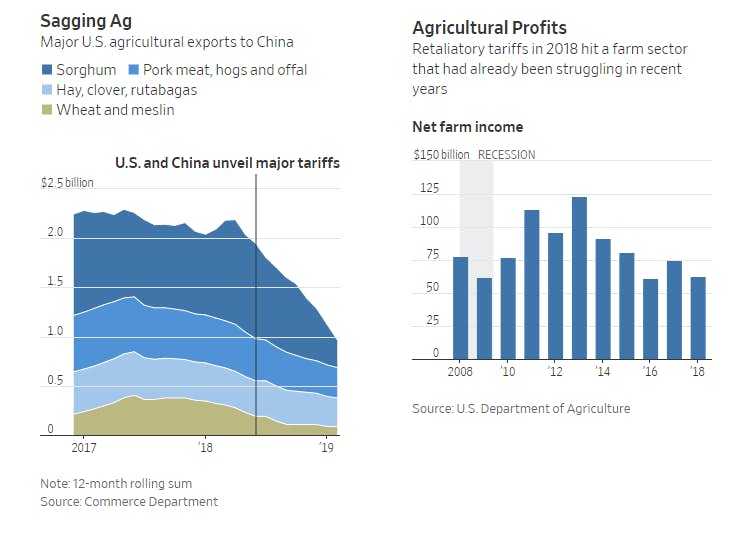 “We don’t want bailouts,” said Mel Egolf, a farmer for over 46 years near Churubusco, Ind., whose family farm produces corn, soybeans and dairy. “We want reliable markets where we have a chance to sell our crop abroad.”

Mr. Egolf is grappling with some tough math: He has already purchased his seed and fertilizer to plant his fields for the year, with about 900 of his 1,800 acres devoted to soybeans. He needs to sell his beans at about $8.80 a bushel to break even, he estimates.

The price at the Chicago Board of Trade has plunged to about $8.40, and the price Mr. Egolf can actually get at his local grain elevator is even lower: about $7.83 as of this week. That means with $1 a bushel in aid, he’d have three pennies a bushel left over as income for the year.

Beholden to the Stock Market

Trump doesn't listen to farmers (nor anyone else), and he never will.

Trump is beholden to the stock market.

He put off the auto tariffs because the Markets Were Not Exactly Pleased With Trump's Tariff Man Act.

Trump's trade Tweet's have been full of lies and buffoonery, so much so that I penned Dear President Trump: Stop the Damn Trade Lies.

On Tuesday, Trump Begged the Fed Start a Currency War With China. Trump specifically wanted the Fed to "pump money and cut rates like China."

Those actions would likely goose the market, creating an even bigger bubble.

Trump is so good at making deals that he has produced exactly zero deals.

In an effort to revive USMCA, Trump lifted steel tariffs.

Despite Trump's bragging, the end result is plain to see USMCA = NAFTA.

Even this latest cave-in may not revive USMCA. It has to get through the House led by Nancy Pelosi.

"Art of the Deal"

Trump did not even write the Art of the Deal. His ghostwriter says it's all a myth.

I have a simple question: Where the hell are the results?