After the dovish talks from the FED earlier in the week, who have been concerned about the US coronavirus situation, more evidence to suggest a stalling economy has been delivered.  The US gross domestic product report and a rising unemployment claims figure were releases last night, furthering the negative economic data for the week. The negative GDP data was largely expected and was in fact better than the forecasts with an actual reading of 32.9% from the expected of 34.8%. What wasn’t expected was the rise in unemployment claims, an increase of nearly 900,000 new claims.

The combination effect has been very damaging for the recovery efforts of the US economy, regardless of the better than expected results for GDP it is still one of the largest if not the largest step down experienced. And when Unemployment claims have been trending down to have a rise, the effect has compounded the fears that the US economy has stalled its recovery.

Interestingly the largest rise in claims came from the states experiencing the worst covid-19 clusters, particularly in California. The impact of COVID-19 on business is becoming even more visible, reflecting the economic issues that shutdowns have on the wider community. Even after some positive data the surging case numbers are proving difficult to contain.

Covid-19 has delivered consecutive painful blows to the economy, increasing fear of transmission and death weigh on the behaviours of consumers and workers, which in turn harms employment levels, and finally delivers an income squeeze.

Adding salt to the wounds, those that are most vulnerable to shutdowns are struggling to get the stimulus support that they need and may find the challenges to be worse in the coming months. The current rounds of stimulus are expected to expire shortly, and lawmakers are yet to come to an agreement on the next rounds of stimulus to help the little guy survive. 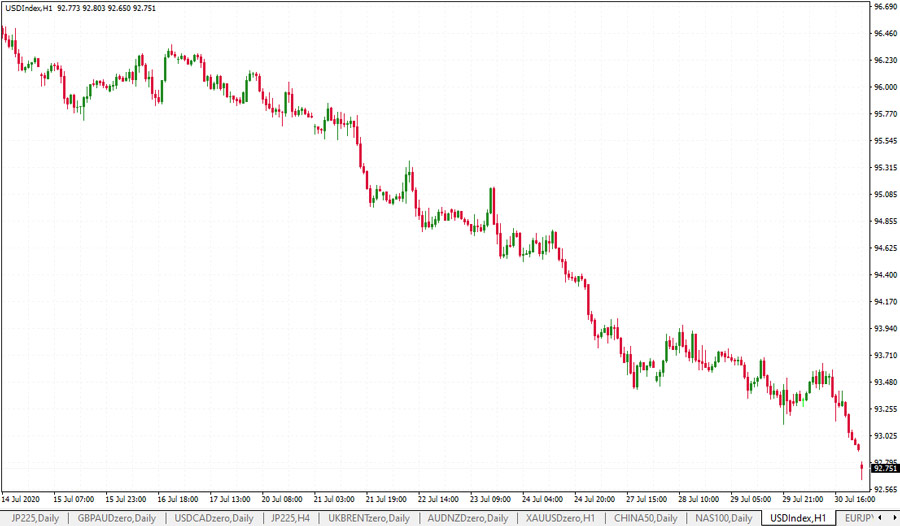 DXY Index – 1HR. The pain from the FED, GDP, Unemployment, and unclear stimulus is obvious with a gap down in the Dollar index.