"Hyperinflation is going to change everything. It's happening" – these hyperbolic words by Twitter and Square CEO Jack Dorsey, may already be a signal of peaking hysteria. However, there are also other signs that issues causing prices to rise are easing. That may move stocks and the dollar.

Here are three signs that inflation may have entered a gradual downhill fall from here.

While Americans are complaining about the price at the pump, oil futures are already showing signs of a turndown. WTI Crude Oil is trading at around $77, down some 10% from the highs near $85. It is trading back at levels seen in late October.

OPEC+ is gradually raising production, and more importantly, China and the US are releasing petrol from strategic reserves to ease price pressures. The mere fact that Iran is back at the negotiating table is also helping.

Prices of natural gas remain elevated in Europe but are below the highs in America. All in all, energy is somewhat less energetic in driving up inflation.

The Baltic Dry Index (BDI) is one of the best global benchmarks for assessing shipping costs. Apart from jammed ports, the dislocation of containerships at critical ports has been straining supplies and hitting consumers. 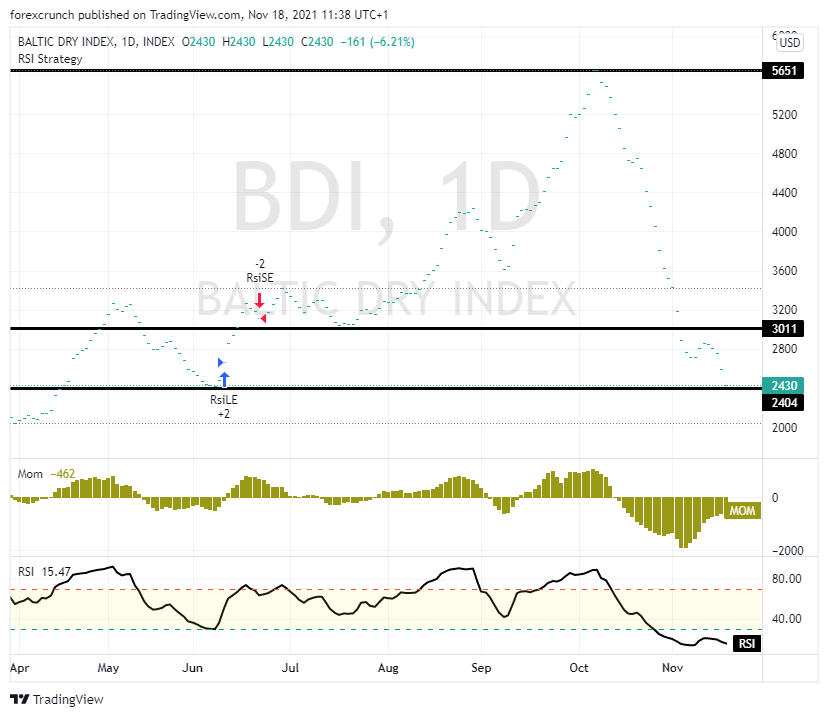 Experts suggest that congestion in Chinese ports is easing and that steel inventories are up. The news about closures of ports in eastern China and long queues in Long Beach, California made big headlines. Now, these pressures are easing as both efforts from the US government and ingenuity from the private sector are working to resolve them.

One of the most significant issues was the lack of chips, especially those used by cars – Apple had no issues with producing its expensive iPhones. The dearth of semiconductors, so essential in modern vehicles, caused plants to shut down and sent prices of used cars to the skies.

A renewed surge in clunkers' costs contributed to elevated inflation in October was joined by reports of plunges in vehicle registration in Europe.

However, assembly lines could churn out new vehicles at a much faster rate. GM announced that all its plants are open in November, the first time in eight months. Even if not all factories are working at full capacity – and the chip shortage is far from over – things are getting better, not worse.

The mix of talk of high inflation and easing cost pressures is perfect for companies. They can hold onto higher prices while paying less for sourced materials. Consumers will continue rushing to buy products, fearing of shortages and higher prices, resulting in more sales.

That, in itself, is good for stocks. Moreover, if the Federal Reserve also eyes these shifts in price pressures, it could fend off calls to tighten monetary policy faster than it planned.

For the dollar, it means the current rally could suffer a correction. If the Fed does not move quickly to raise rates, there is no need to buy the greenback.

Gold could also benefit from some investors' perception that it serves as a hedge against inflation – and others search for yield while returns on US debt are falling.

A surge in global demand for goods – and a drop in services – has pushed prices of goods higher everywhere and caused shortages that were worse than expected. However, the global economy may have seen the worst of inflation. The evidence is mounting.