The world is facing a set of unprecedented extremes in many different areas. The debt crisis, the COVID-19 pandemic, the effects of climate change and, most recently, the armed conflicts in Ukraine involving major countries, leading to food crises and energy insecurity, all seem to be creating conditions for a perfect storm. However, the good news is that the situation remains and is expected to remain under control, as difficult as it may seem. 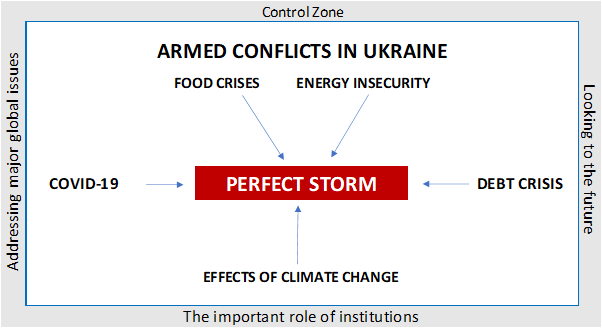 Developing countries are under pressure

Energy prices have skyrocketed, and COVID-19 continues to rage because, in low-income countries, the fully vaccinated represent a tiny percentage of the human population.

The food crisis exacerbates the problem of millions of people facing the spectre of hunger for many years, while hundreds of millions are expected to face the prospect of starvation. (According to WFP).

The problems are big and global. As such, they are interrelated and must be addressed in an integrated and coordinated manner. Efforts to address debt, energy and food insecurity have already begun. This will require ensuring fair prices and secure supplies in the food and energy markets.

The good news is that international institutions and many governments have responded to the food crisis. However, much remains to be done. Perhaps now is the opportunity to set the conditions for how the global food market will operate both in the short and long term, both on the supply and stock sides.

Major countries with grain reserves should release them to international markets. This is a scenario that is likely to happen, and in which case, further price increases will be limited.

On the energy front, there is the prospect of a number of countries forming an oil market cartel so they can negotiate better prices. What is expected to happen immediately is the acceleration of the development of renewable energy sources. It is also expected for countries to improve energy efficiency and reduce dependence on fossil fuels.

The important role of institutions

The good news is that the International Monetary Fund, the multilateral development banks and the World Bank are the institutions that have the capital and capacity to make the necessary moves to provide relief from today's food, energy and debt crises.

These institutions will play an important role especially now that major central banks are tightening their monetary policy. The credit ratings of many middle-income countries are being downgraded, moving towards the spectra of a new debt crisis. A restructuring and relief initiative for developing countries with unsustainable debt burdens will therefore be required involving many parties acting proactively so that debt restructuring does not become too large.

However, effective renegotiation of public debt will require greater transparency, so we will need to move to an era of common rules and regulations accepted by all.

Looking to the future

On the positive side of the outlook, it is necessary to mention that, in the long run, rising inflation raises nominal GDP and consequently lowers the debt-to-GDP ratio. Also, the impending stagnation of real-World GDP will slow energy price increases globally.

We are facing an unprecedented confluence of issues that are likely to reshape our future. To address these issues, the world will need to act immediately, by implementing the above practices to keep the situation under control.