Economic Data: The U.S. inflation rate was reported at 1.65%, down from 1.8% previous. Inflation, like growth, has slowed considerably from the peak in 2018. 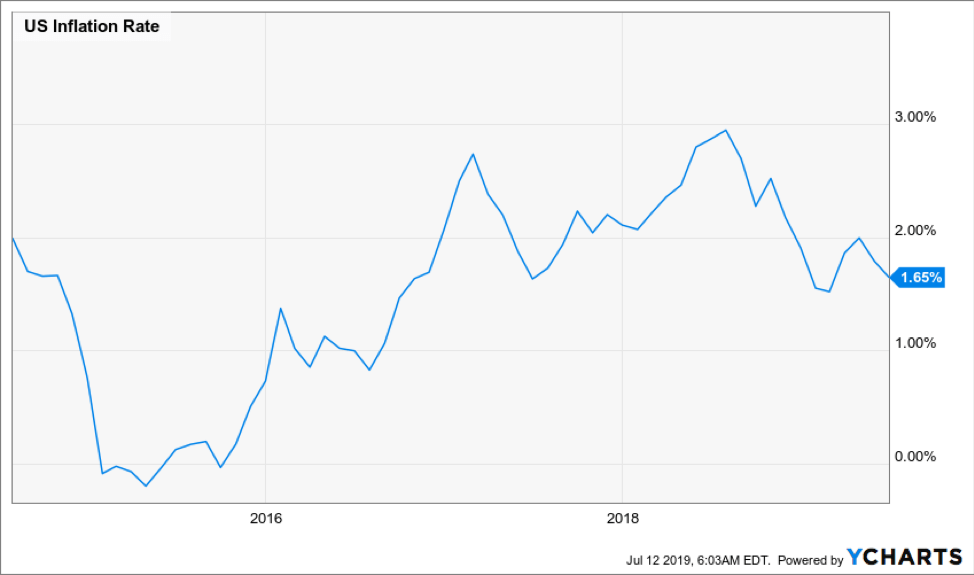 Pharmaceuticals: The Pharmaceutical sector was the weakest performing yesterday. The XPH ETF was down 1.63% and is in a negative trend. 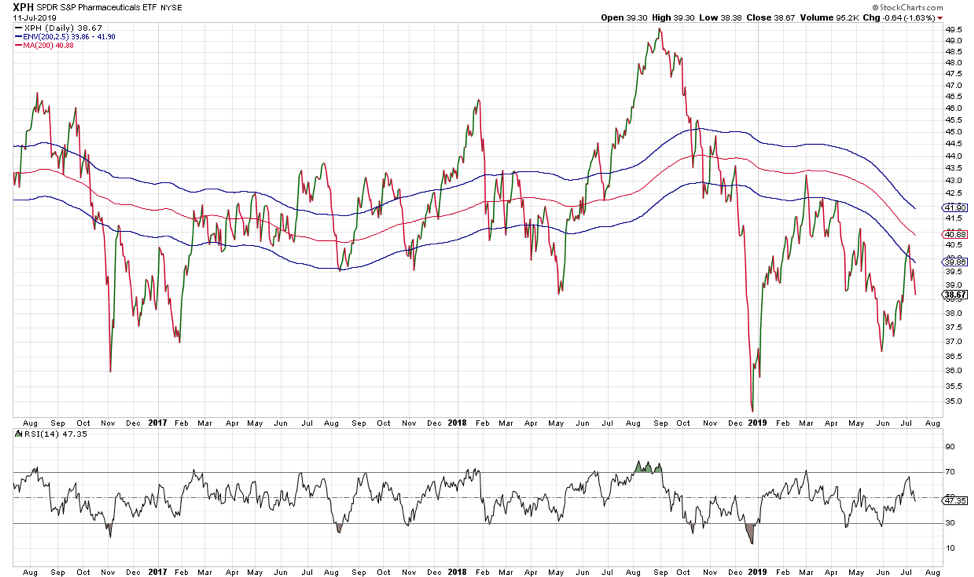 Regional banks: The regional banking sector ETF (KRE) was the strongest performing sector yesterday, closing higher by 0.79%. The sector is still in a negative trend, however, despite the performance yesterday. 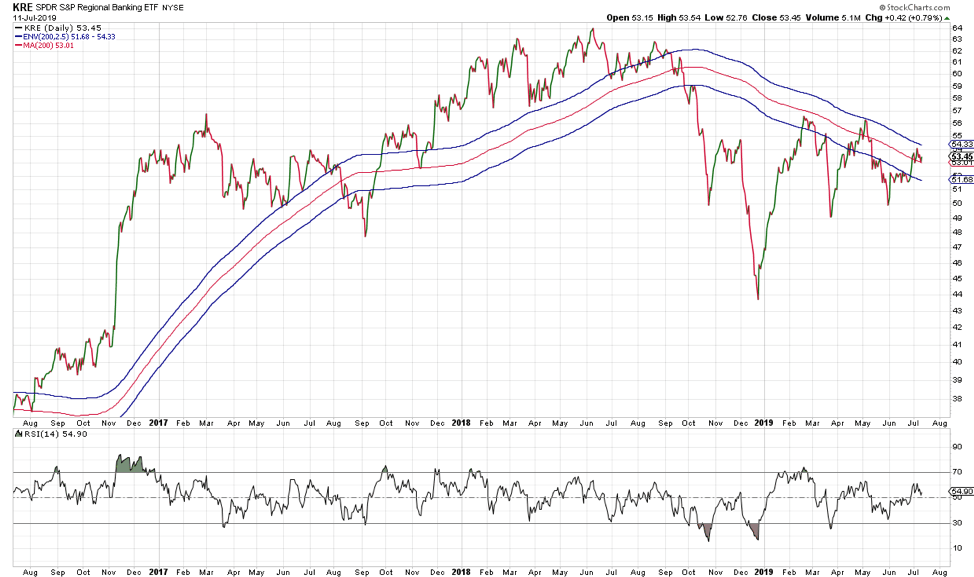 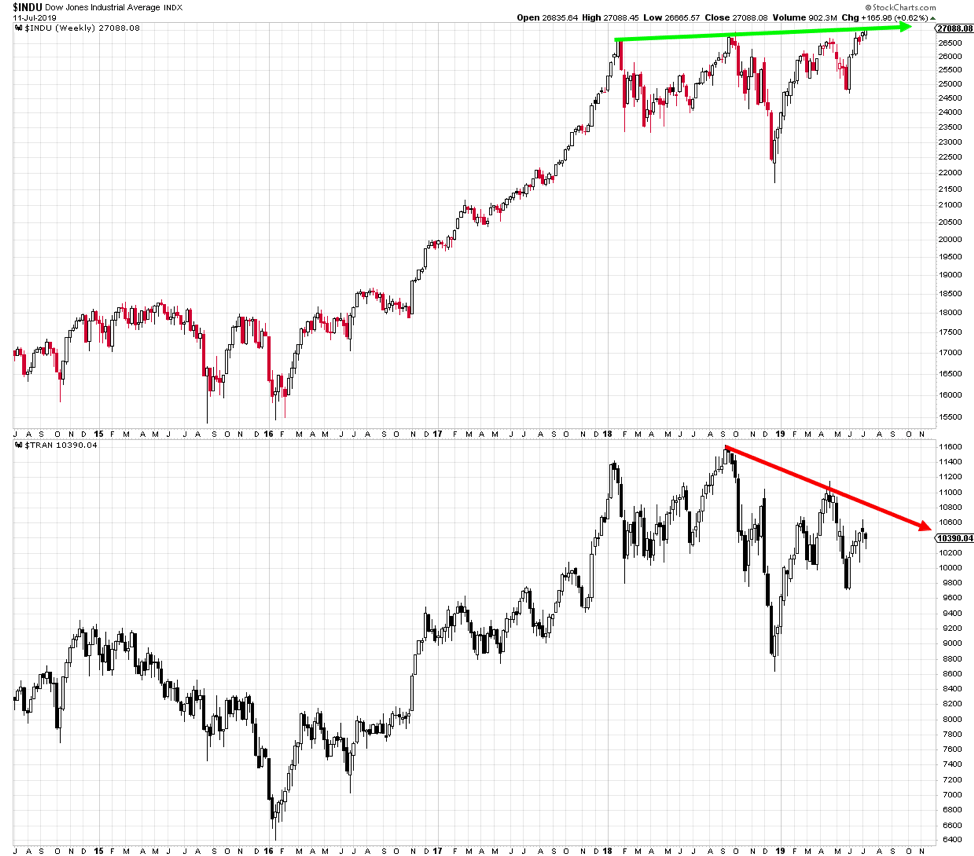 A new look at Dow Theory: Another way to apply traditional Dow Theory to modern markets is to look at the S&P 500 (IVV), Russell 2000 (IWM), and Nasdaq 100 (QQQ) for clues as to the trend of the broad market. The S&P 500 and the Nasdaq 100 are confirming each other currently by both breaking to new all-time highs. On the other hand, the Russell 2000 has failed to confirm the breakout and is negatively diverging. All three should agree. 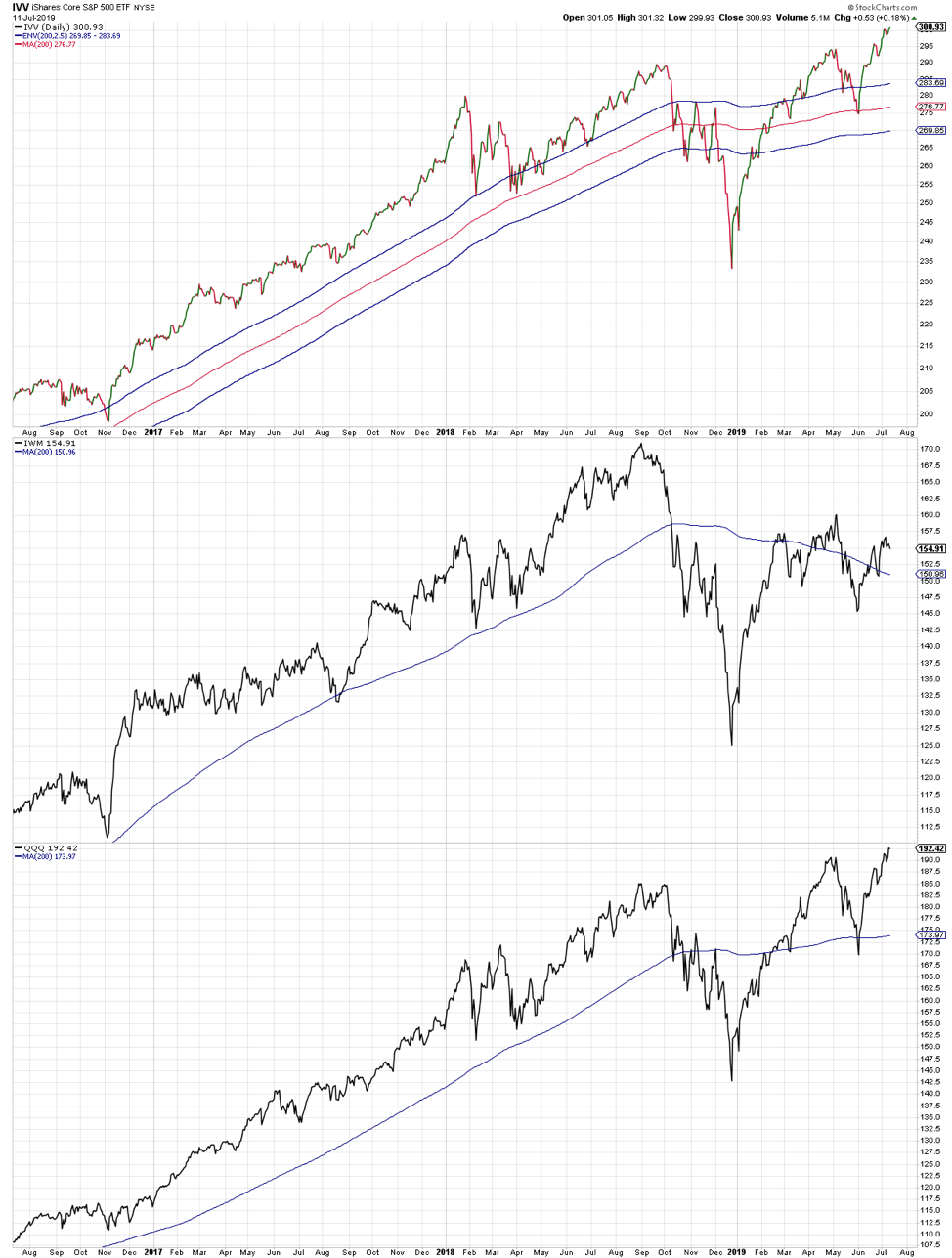 International Markets: A similar approach can be applied to looking at the total U.S. stock market relative to international developed and emerging markets. U.S. stocks have reached new all-time highs; however, international markets have failed to confirm. All markets are above their 200-day moving averages but have not moved to new highs in a united effort. 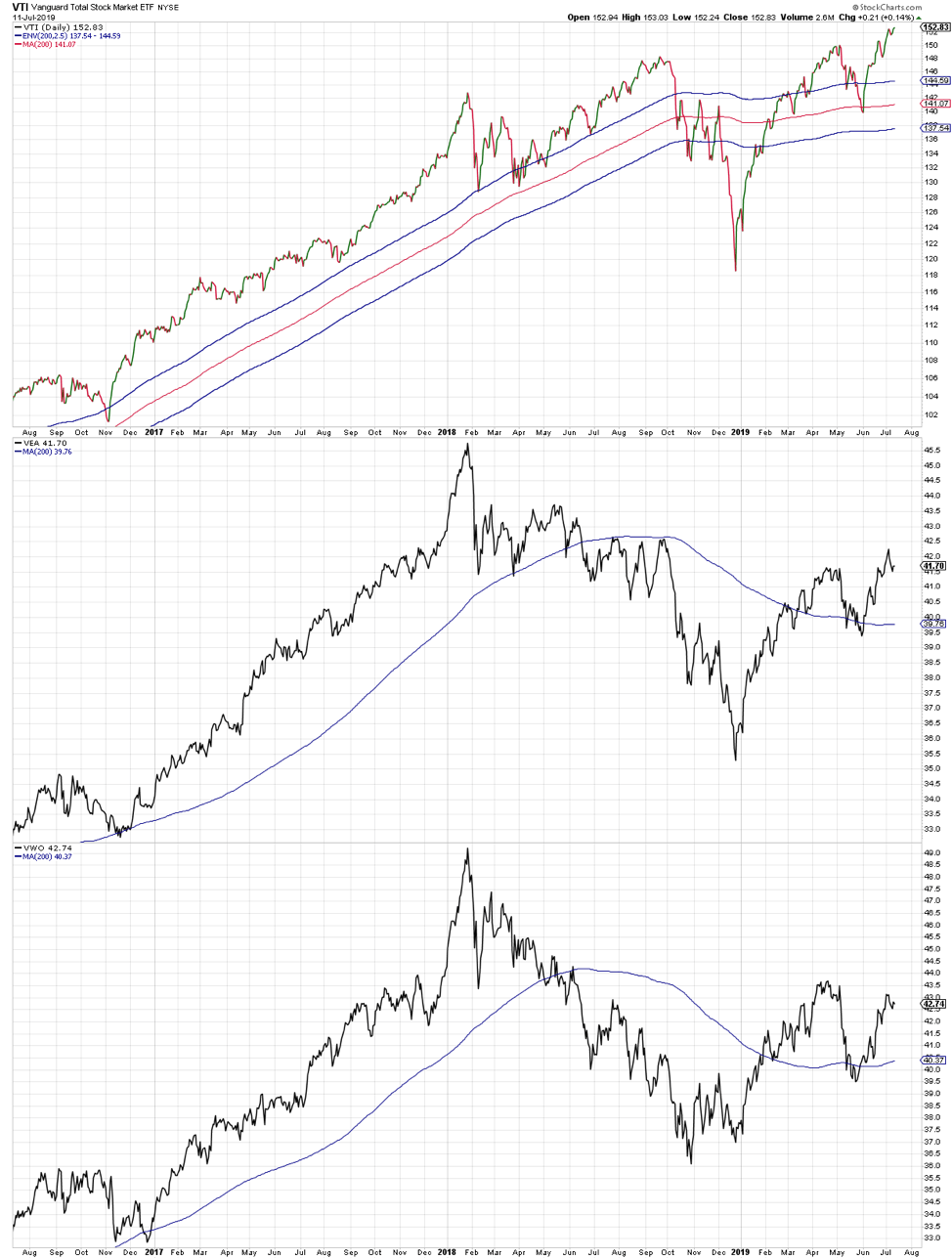 Lumber: Lumber is back to moving in the wrong direction relative to Gold. We would expect a move higher in volatility given the historical relationship between Lumber/Gold and equity market volatility. 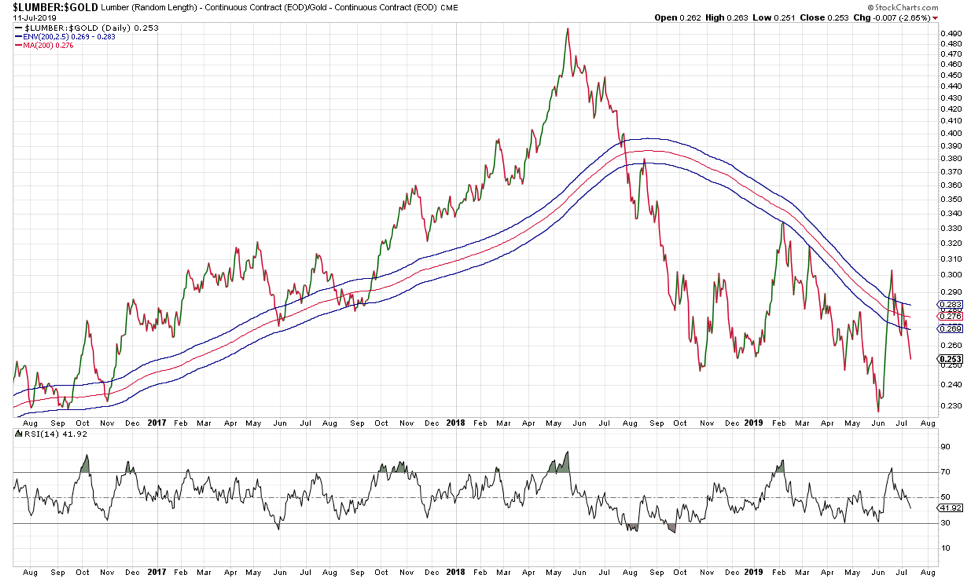 Treasuries: Long-term Treasuries (TLT) have sold off significantly over the last few weeks. Yesterday was another tough day for long-term bonds. Treasuries are still in a positive trend and are no longer overbought. However, momentum is breaking down and the bottom might not be in yet. 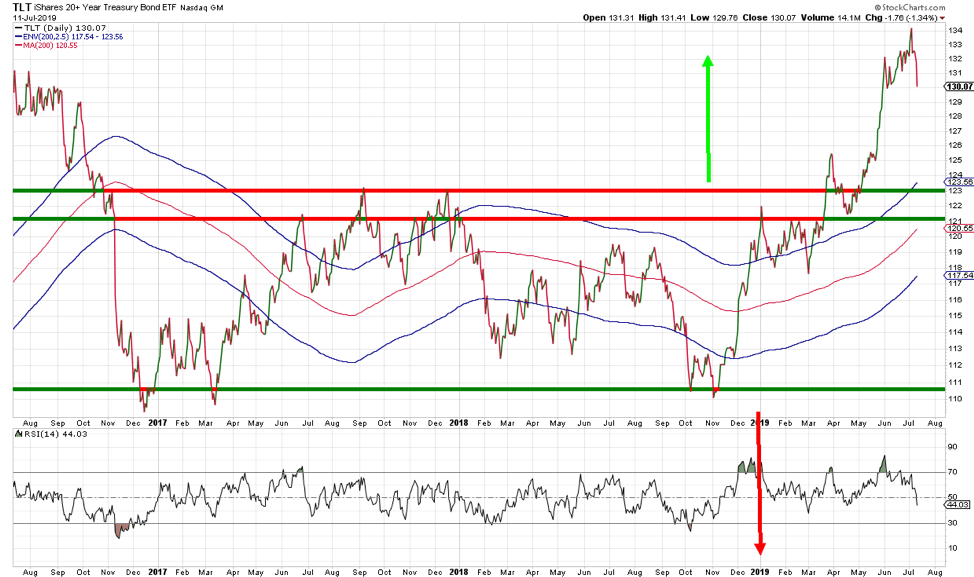 Oil faces the double threat of rising stockpiles and Tropical Storm Barry, which may become a hurricane late tonight and hit Louisiana tomorrow. Almost 20% of U.S. refining capacity is potentially in its path. The IEA said stockpiles swelled in the first half, topping demand at a rate of 900,000 barrels a day. Check out our QuickTake on the Strait of Hormuz and tanker attacks.

Tariffs are taking their toll. China's trade report showed imports slid more than expected and exports fell in June. Shipments from the U.S. tumbled 31% from a year earlier, while those to the country dropped 7.8%. The $29.9 billion trade surplus with the U.S. was the widest this year. Exports will remain weak for the rest of the year, UBA's chief China economist said. "But probably not as bad as in June." Here's what you need to know about the U.S.-China trade war.

Turkey got its first shipment of missile parts from Russia, ignoring the threat of U.S. sanctions over the purchase of the S-400 missile-defense system that's alarming other NATO members. The U.S. said the system is designed to shoot down NATO planes and can collect intelligence that may compromise stealth capabilities of its F-35 fighter. The lira weakened. This QuickTake looks at why missiles divide the U.S. and Turkey.

Budweiser Brewing may postpone its Hong Kong IPO and change the terms, people familiar said. The AB InBev unit is struggling to price the $9.8 billion offering in the initial HK$40 to HK$47 range because of difficulty finding sufficient demand. The company was expected to price today and start trading on July 19. A final decision hasn't been made.