Many investors want to predict the next recession. There’s no imminent sign of a recession, but there is the risk of one in a few years since the economy has been recovering for over 8 years. One of the best signals of a recession is the yield curve. When the Fed raises rates enough, it inverts the yield curve, causing a recession usually a few quarters later. The chart below, shows the history of this process. The blue highlight shows the rate hike cycles and the grey bar shows the recessions.

The time between the last recession and the beginning of the rate hike cycle was long. When you include QE 1,2, and 3 and operation twist, it makes the period look incredibly dovish which is an accurate depiction. It’s interesting to see that this current hike cycle is already near the average length even though it’s probably not close to ending (in terms of timing not amount of hikes). The QE unwind hasn’t even started yet and rate hikes will continue in 2018 although the market is hesitant about there being more than one hike. The other interesting part is that despite the decent hike cycle length, the yield curve hasn’t flattened much. The global QE helped to steepen the yield curve in 2016, showing how QE affects the market. The other reason why the curve hasn’t flattened much is because there hasn’t been that many hikes. The Fed has been very hesitant.

The final part of this chart worth discussing is what it shows the forward curve is pricing in. The yield curve usually flattens during recoveries, especially when the Fed raises rates and the recovery is near its end. The market prices that in to give you an idea when the yield curve will invert. It’s great to look at the yield curve, but this future curve helps you with the specific timetable. Keep in mind, this timetable will change as new economic reports come out. If the economy was on pace to grow less than 1% in Q3, you’d see a sharper decline priced in. As you can see, the yield curve (10-year versus 2-year bond) expects 30 basis points of flattening in 2 years and 70 basis points of flattening in the next 5 years. This would imply the next recession would be in over 5 years.

I think this expectation is too optimistic because the current economy is strong. The ending of global QE could be problematic for the yield curve, but the lack of many rate hikes in 2018 by the Fed makes the near-term expectations not unreasonable. This is a guide to see where the market thinks the economy is going, not a baseline forecast that you should latch onto. It means the market will be very vulnerable to weak economic data because it doesn’t expect a recession for another 5-7 years. This future curve is about timing as any indicator is. If you looked at the future curve in 2016 during the height of the recession fears, the expectation for a flattening yield curve would have been more aggressive. 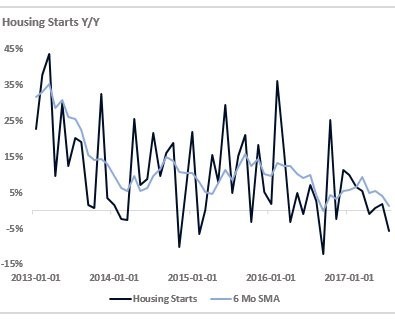 Weak housing starts paint a weak picture of the economy when you combine them with the weak auto sales results. As you can see from the chart on the left, seasonally adjusted annualized auto sales have dipped. The chart on the right combines the 6-month average change in car sales and building permits. It paints a grim picture as it is nearly recessionary. Any bear who points to this a reason the economy is going into a recession is being disingenuous. You can’t just take the weakest parts of the economy and arbitrarily combine them to form an indicator. There’s no question that these are two of the largest purchases the consumer makes, but overall consumer spending is increasing, global trade growth is increasing, the manufacturing sector is improving, and wage growth is strong. The GDP expectations for Q3 are all high despite the weakness in these two areas of the economy. There will always be pockets of weakness, but there’s no reason to be alarmed.

The final chart we’ll look at this in this article is seen below. It shows the non-financial EBIT compared to the S&P 500. The non-financial EBIT is below the 2014 high which isn’t shocking because financial earnings have done very well in the past 12 months as the Fed has raised rates, increasing the banks’ net interest margins. We’ve also seen improved credit conditions as the junk bond yields near the lowest levels since 2007. This chart reinforces the point I made in the last article. The earnings can improve without stocks rallying. This is especially true since stocks have gotten ahead of themselves. They’ve already priced in the great earnings of 2017 and the potentially great earnings of 2018. 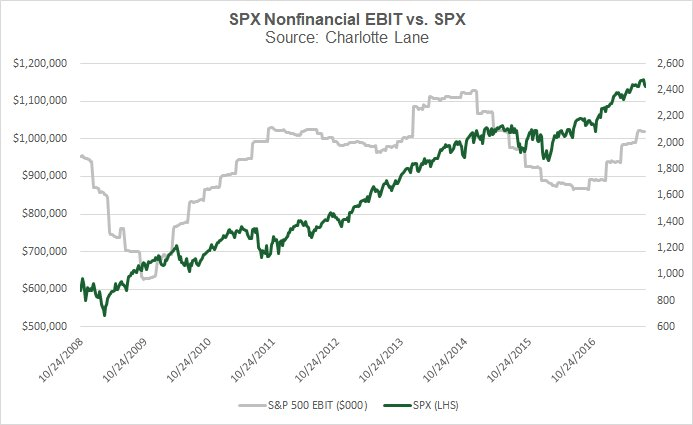 The forward yield curve is anticipating a recession in about 5-7 years while the auto sales and housing permits index is anticipating a recession this year. I think the truth lies in between. Even with strong economic growth and earnings growth, it doesn’t mean stocks are bound to rally. The non-financial EBIT is just catching up to 2011 levels while the stock market rallies at hyper speed. At some point, multiples will compress meaning great earnings in 2018 don’t mean stocks will do great.